And so the second half of this shortened season begins same as the first, with the Hawks on the road. In this case, it’s not quite as far west as before, with the Hawks taking on their soon-to-be divisional opponent Avalanche in Denver on the tail end of a home-and-home.

For the hosting Avs, regrouping after being felled at the hands of Gorilla Salad in the waning seconds of Wednesday night’s game will be key. The Avs gave the depleted Hawks all they could handle for 59 minutes, mostly at the will of grinning imp Matt Duchene, who was all over the place for the Avalanche. They’ll get reinforcements tonight, as it appears that Dorf On Golf aficionado Erik Johnson will make his return to the Colorado blue line. While Johnson has underachieved by #1 overall pick standards, he’s still got the size and an all around skill set that the Avs have sorely missed in his absence.

Semyon Varlamov figures to go again for the Avalanche in net, and he’s quite a different story at the Pop Can than he is on the road. Varlamov is 6-2-0 at home with a 2.19 GAA and a .922 save percentage, as opposed to 0-7-2 with a 3.44 and .899. Furthermore, the Avs give up nearly five whole shots fewer at home in front of Varly. Once again, this is a function of the Avs being solid as a team at the dot with Stastny and Duchene, and O’Reilly (once he gets back up to non-KHL speed), and there being a real advantage for home teams in putting their stick down second for a draw. The Avs simply have the puck more at home.

As for our Men of Four Feathers, life without Patrick Sharp begins tonight, though Andrew Shaw and Marian Hossa are mercifully good to go. As a result, Joel Quenneville has had his first real opportunity to hit “puree” on his line combination blender. Word out of practice is that the lines are as follows:

There are some good things and bad things about this configuration. On the negative side of things, arguably the Hawks’ best line of Bickell-Shaw-Stalberg is broken up, with a big, greasy hairball in the form of Dan Carcillo thrown into the gears of what had been a smoothly running machine. It would not surprise me in the least if Michael Frolik gets a look with Shaw and Stalberg if Gorilla Salad becomes a liability. It’s also once again pretty inexplicable to sit Jamal Mayers in favor of Bollig against these Avalanche, being one of the few Hawks who can actually win a draw.

However, positively, Brandon Saad gets to keep his rightful place with Toews and Hossa on the top line, even though the fact that it has ever been in doubt is a crime in and of itself. Additionally, Bickell and Bolland have worked well together in the past, albeit primarily in a checking role. But Bickell gives Bolland and Kane something they haven’t had to this point in the season, and that’s a true cannonball on the forecheck. Bick has been downright predatory in hunting down pucks in the offensive zone, and it should help to keep Bolland and Kane from getting pinned in their own end. On the blue line, the lineup remains the same as Wednesday despite Michal Rozsival having a few icky moments.

Corey Crawford will reclaim the net for the Hawks tonight. With the speed of the opposition tonight, any aggressive drifting on top of his crease as he had been doing in Detroit and against Minny will be punished by a skilled and speedy Avs forward corps.

Just as was the case on Wednesday, this game is proving to be pretty important to the Avs, who are still convinced they have the firepower to be the ones to end things for the Hawks. And with Patrick Sharp out and EJ back for the Avs, they very well could be right. Corey Crawford has a 2-3-1 career record against a Colorado group that has given the Hawks fits the last three seasons, Wednesday night included.

Given the way things ended then, and that this is Colorado’s first game back after being on the road for a week, it’s predictable that they’ll come out flying attempting to right the wrongs of Wednesday. The Hawks will need to weather that and bring both middling-to-bad Avs special teams units to the forefront of the outcome if they’re going to take another two points. Tonight marks the beginning of the back stretch of the season. Make it count. Let’s go Hawks. 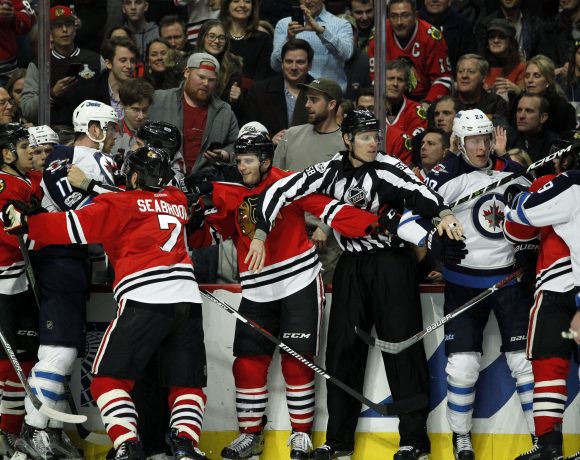 Just Get Me To the Airport – Jets 5, Blackhawks 3