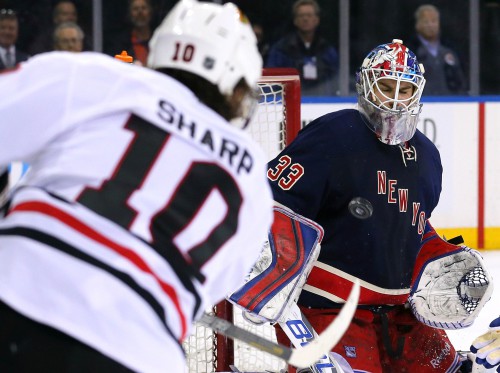 It was about what you would think a game after nearly three weeks off would look like. Players playing at different speeds, wavelengths, sloppy, disjointed, a bit frantic. I don’t think the Hawks looked lethargic per se (well, except for Seabrook) but they definitely didn’t look in sync. It might be a couple games before they do, and the problem there is that that’s when the adrenaline of being back with your teammates might wear off and the miles traveled might catch up. But we’ll run that kitten over when we get to it.

And once again the hammock nature of the Hawks forwards kind of reared its ugly head again (much like love). The Hawks get dominant shifts from the top consistently, they get decent ones from the fourth line for the most part, and then the second and third lines come out and give a performance art interpretation of Zaireeka. Sometimes it’s good, sometimes it’s bad, and most of the time it’s splatter pattern. Can we break up the top line yet?

-It may seem on Twitter that Kris Versteeg has become my new whipping boy, and I’ve probably made it a little stronger than I intended. But it’s fair to ask after three months here what it is he’s giving the Hawks. And at this point I don’t really know that it would be any more than Jeremy Morin would, who he was brought in to replace as Stan clearly threw his arms in the air, gave up on Q ever giving Morin a chance, and brought in Versteeg to essentially do the same thing. But he hasn’t, really. He hasn’t shown enough flash (or at least useful flash, he’s got plenty of the non-useful kind) to be on the top six and it appears Q doesn’t think he has enough snarl to play on the bottom six. He has driven both Kane’s and his own game into the toilet since being paired together lately. Let’s rethink this, shall we?

-I was hoping that at the very least after three weeks off and maybe time to reflect on how he was punted off Team Canada for Dan “I got this” Hamhuis, Brent Seabrook would at least look fresh. So much for that.

-Another problem the Hawks are having in the middle six is that Andrew Shaw has returned to Earth. Through his first two half-seasons (which is what they were), Shaw shot 16.2% and 14.1% which is kind of really good. Sidney Crosby shoots 14.9% for comparison’s sake, though it would put Shaw about top 45 in the league. Since December 1, Shaw is shooting 7%. That might just be a market correction, and probably is because it sounds a little low. But I’m not sure he’s going to reach the 14% threshold again, which could lead us all to ask what he is. And what he really is is someone who should be skating where Brandon Bollig is to give Morin or Pirri (or Kesler and no I won’t stop) a spot. Shaw also was the one who pretty much watched Rick Nash curl to the middle after Hammer had sent him to the corner, while also blocking out Hjalmarsson. So that’s not good.

-I won’t leave Golden Boy out of this, as Brandon Saad’s three goals on the trip are three of four he has in 2014, and that’s not good enough. But at least when Saad’s not scoring, I know what he’s doing. Can we say the same of Shaw and Versteeg?

-Nick Leddy skated 17 minutes tonight, which while we haven’t been looking he’s been consistently doing since the turn of the year. And he was doing it really effectively. I feel like Leds could end up being a secret weapon in the spring.

-Peter Regin was there. He lasted two periods as Kane’s center. That’s a fine storyline you all ran with there, beat writers!

Just one. It might look wonky for a few more. But hey, the Pens just gave up five at home to the Canadiens. Maybe they’re what’s good for the Hawks? 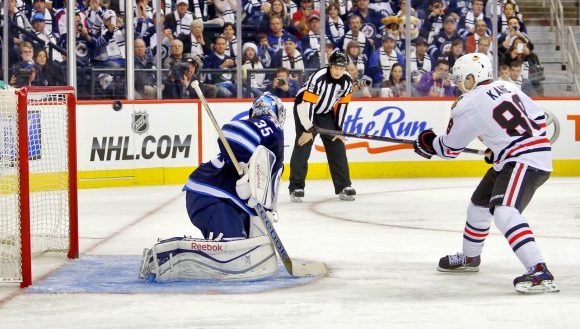 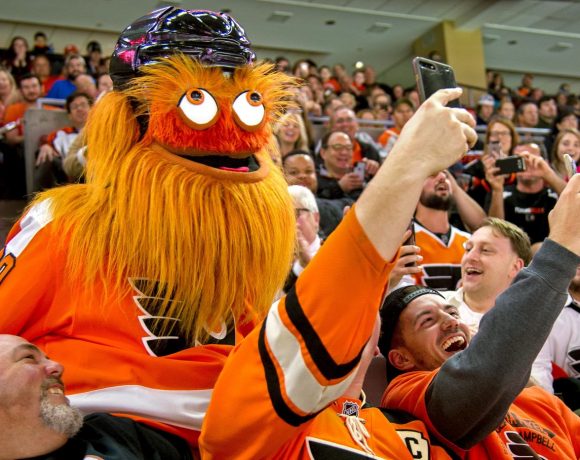 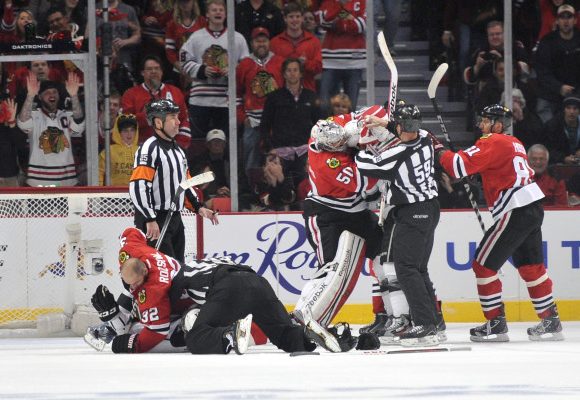