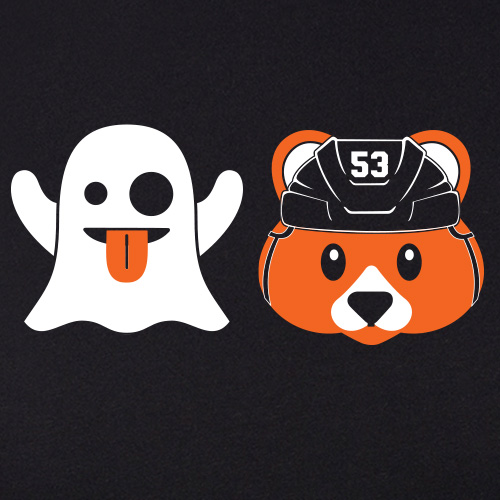 We continue our look around what the Hawks might be able to pry loose via trade this summer, and our lonely eyes turn to The Iladelph. This one isn’t as clear as some others, where the Flyers aren’t actively shopping Shayne Gostisbehere. But they’re also listening, desperate for some forward help. That’s why they’ve traded for the rights to pay Kevin Hayes, who sucks, but it would be truly Flyers to get the jump on negotiations and fuck them up anyway.

So first off, would the Flyers actually part with Ghost Bear? Possibly. He’s been passed on the depth chart by Ivan Provorov, and it might soon be that Travis Sanheim does as well. They’ve been waiting for Robert Hagg and Samuel Morin forever, and there’s a couple other kids down in the system as well. It’s something of a strength to trade from for them.

And Ghost Bear has earned himself the title of a power play specialist. Your first reaction is to say that he’s just younger, more mobile Erik Gustafsson. Except that younger and more mobile is something we’ve wanted Gus to be for his entire stay here, so I’m not sure that’s anything worth complaining about.

But yes, Gostisbehere has racked up the power play points in the past, with 33 two years ago, and 23 the year before that. That doesn’t mean he’s a total nincompoop at even-strength, with 23 points this year and 32 the year before that. Ghost Bear might always be haunted by his rookie year where he put up 17 goals in just 64 games. But he shot 11% that season, which is astronomical for a defenseman and really shouldn’t be expected again.

That said, Gostisbehere’s metrics at evens are pretty good, well above the team-rate in Corsi the past three seasons and above in expected goals the past two. The caveat here is that Ghost Bear is punted in the offensive zone to start his shifts most of the time, so he should probably carry a higher rate than the team.

The drawback to Ghost Bear is that he doesn’t help out the defensive game much. And while he’s brilliantly skilled and mobile, it’s unclear if he can consistently skate or pass his team out of trouble when in his own zone. He wasn’t asked to do it a whole lot in Philly. Again, perhaps paired with a really good defensive partner you’d have a nice dynamic, but right now the only player the Hawks have that qualifies as that is Connor Murphy. It’s a nice thought, but a Ghost Bear-Murphy pairing sounds like a really nice second pairing and doesn’t solve your top of the rotation problem.

Is he gettable? Probably. Rumors have the Canadiens hot on his ass and dangling Andrew Shaw and/or Paul Byron to get him. Certainly Brandon Saad would be more than that, though if that deal straight up makes you queasy I get it. The Flyers are desperate for any kind of second line help, and Saad would definitely qualify as that. Fuck, maybe you catch the Flyers being the Flyers and convince them that Anisimov is that, especially if they can’t sign Hayes. It’s a longshot, but dumber things have happened.

Does he help? That’s a harder case to make. Again, the Hawks are fiending for mobility on the back end like no one else. This would make Renton’s withdrawal look like a cold. But Ghost Bear might be more of what they have, somewhat wayward in his own zone. If he had proved to be a carry-the-mail type, you’d be in on this 100%. But he might just be like Gustafsson, where you’ve got to get him to the offensive zone another way before his real effectiveness is apparent.

Like we’ve said about just about everyone we’ve previewed, he’s better than almost everything else the Hawks have on the roster now. But is he such an improvement? He would make Gustafsson expendable and you probably can fetch more for Gus than you give up for Ghost Bear simply due to the contract. Ghost Bear is also 26, so he may have some improving to do but he’s also not so far away from his peak that you can picture him being significantly more than he is. Again, this feels like another half-measure. 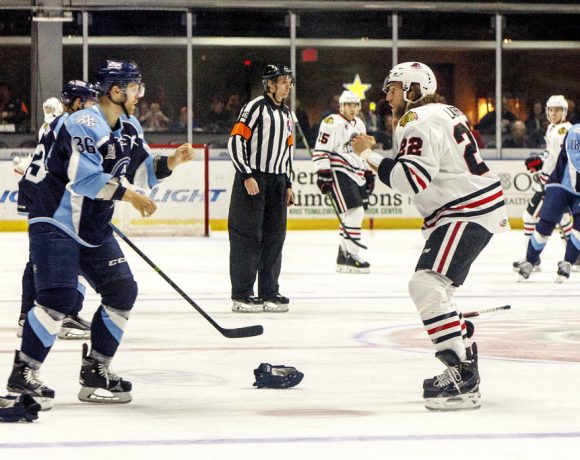 High On The Hog: Fighting Fading In Rockford?