The Hawks remain in a New York state of mind, taking a trip across the East River and into Prospect Heights to take on the scuffling Islanders in their completely cockeyed arena.

As Sam touched on earlier today, it’s easy to see where things have gotten a little sideways for the Islanders. Trying to replace Kyle Okposo with an aging Andrew Ladd was never going to work out from either a financial or a production standpoint, and Ladd’s 6 points find themselves on the fourth line opposite the even older Jason Chimera and centered by an actual person named Alan Quine. But obviously the Islanders’ fortunes rest basically entirely on the shoulders of John Tavares, whose production is solid if unremarkable this year with 9 goals and 13 assists. Considering there isn’t a single Islander north of 10 goals on the roster 30-ish games into the season, that Tavares has even produced that much is a minor miracle. There are still useful parts here, as Anders Lee and Brock Nelson (playing somewhat out of position as a 2nd line center) are large and have produced in the past, and despite catching a healthy scratch or two a couple weeks back, Ryan Strome of the Flying Strome Brothers still has scoring potential to be tapped. But when they’re asked to do it around the likes of Casey Cizikas and Cal “Blackface Is Funny And I’m An Asshole” Clutterbuck, the order becomes a bit taller. This is a unit that lacks cohesiveness and depth in the absence of Frans Nielsen, and the results have borne themselves out pretty plainly in the standings.

On paper, the Islanders’ blue line should be better than it is. While not a true #1, Travis Hamonic is still highly capable of taking on the opponent’s top units nightly, though the offensive production has never been there. When together, Nick Leddy and Johnny Boychuk formed a nice complimentary unit of a puck mover and free saftey, but they’ve been split up in an effort to find balance. Thomas Hickey can be an effective third pairing bum slayer, and Calvin de Haan has been a solid physical presence while not completely helpless with the puck. Dennis Seidenberg stopped being effective as soon as Zdeno Chara lost a step and a half, but really only he is the glaringly obvious weak spot on this blue line, yet all six that are slated to be in the lineup  are no where close to being on the positive side of the shot attempts ledger.

In net, Cap’n Jack has cast his moozadell-clouded gaze and amazing hair at Thomas Greiss over whatever it is Jaro Halak is these days. Greiss has always been a perfectly adequate backup and is putting up those types of numbers with a.919 overall and a .926 at evens, which even 3 or 4 years ago would have been solid and respectable. But in an increasingly goalie-dependent league, those marks are average at best, and if the forwards aren’t scoring, it’s a recipe leading to what the Islanders are right now.

As for the Men of Four Feathers, Michal Kempny finally makes his return from exile tonight, for reasons no one has been able to fully discern or articulate, while Gustav Forsling gets a night of mental reps and press box sushi and kale smoothies. While the optimal situation is for Trevor Van Riemsdyk to never play for the Hawks again, if Passenger 57 absolutely has to play, it at least gets everyone else playing on their correct sides, so maybe his so-called versatility is in fact a skill (it isn’t). Scott Darling will get yet another well-earned start as Corey Crawford nears return.

The forward lines will remain the same, and Toews and Tavares figure to get plenty of time together tonight as Cap’n Jack doesn’t really have any other options. That should leave the Anisimov line with a fairly decent matchup to get some things done offensively.

The Islanders are struggling, but they do have a fair amount of speed up front, and if the Hawks aren’t careful with their puck management, there is some finish there that can put the Hawks in the familiar position of having to press to get back into the game. But if they can keep a lid on Tavares, the secondary options for the Islanders will have to produce above what they have shown to be capable of so far this season. Let’s go Hawks.

Within Your Reach: Hawks at Wild Game 6 Preview/Pregame Thread/Underwater Pilates 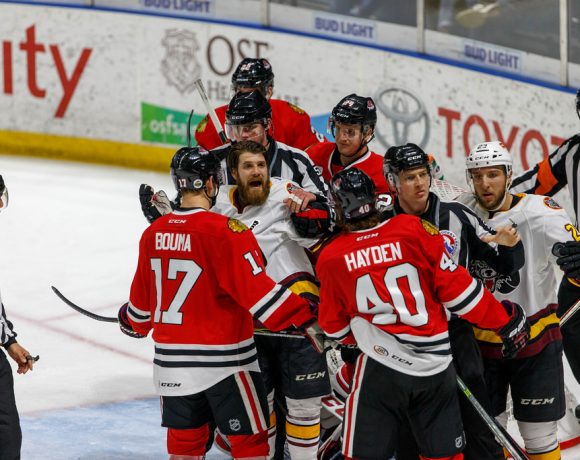 High On The Hog: Playoff Preview