Actual knockouts begin today. Spears shall be shaken,  shields will be splintered and all that. Most eyes will be on the Russians to see if they can get their act together a bit.

2am – Slovenia v. Austria: The Slovenians were a little more stout than we all thought they would be, beating Slovakia and hanging with the Russians for a couple periods before getting clowned by Phil Kessel. Austria is the only team to make Canada look dominant, and also got clubbed by Finland but did beat Norway. Austria has the tourney’s leading scorer in Michael Grabner and a couple other weapons, so you’d think they’d find a way. But Slovenia has apparently used their first ever appearance as inspiration and I get the feeling they’re going to find a way to sneak this.

6:30am – Russia v. Norway: The pressure won’t get any lighter on the hosts, who followed their loss to the US by needing a shootout to get past whatever is parading around as the Slovakian team (when they weren’t bitching and crying about their disallowed goal. Jesus, get over it). They haven’t really sparkled yet, but there isn’t enough on Norway to get at their weak defense. Last time around, it was here that the hosts started to put it all together after a disappointing prelim round, and hit full stride in the quarters. Finland will obviously be nervous.

11am – Switzerland v. Latvia: A lot of us are hoping the suffocating Swiss discipline and system will give Canada all they want in the quarters. The Swiss have made a reputation of being something like the Predators of international hockey — plus speed used not to score but to close up the neutral zone and clog lanes and put pressure on the puck combined with strong goaltending. But I’m not sure they’re a lock to get past Latvia. They’ve already played, and the Swiss needed to score with seven seconds left to win that. The Latvians are a Ted Nolan team after all, and that means they’re just hard to beat. I think Hiller will be enough to see the Swiss through, and I think it’ll also be like watching old people fuck.

11am – Czech Republic v. Slovakia: At least it’s a rivalry? Slovakia has been pretty much awful this tournament, getting clowned by the US before being the first in history to lose to Slovenia in the Olympics. They kept the Russians tied in knots I suppose, before falling in a shootout. But they have scored exactly twice in this tournament, and the Czechs should be able to dry heave into a couple themselves you’d think. The Czechs haven’t been too much better. They were way off the Swedes in the opener despite the 4-2 scoreline, struggled with Latvia and were shutout by Switzerland. You get the feeling both of these teams want to go home. Root for the Czechs, so Hossa gets the extra day of rest. Neither should be much of a threat to the US in the quarters.

Discuss all the goings on here. 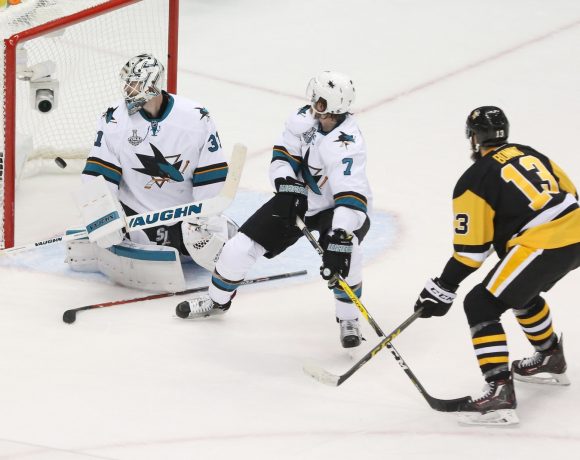 We Like To Watch – May 31st – Jeremy Jacobs’ Nightmare

The Real NHL Standings Halfway Through