I’m writing this as the Wild-Blues goes on and fully admit by the time you get to read this the result of that game will have rendered this one meaningless. If the Wild don’t claim both points, the Hawks will open at Nashville next week for Game 1, and I guess you could argue that’s what they’ve been angling for anyway. Or not. I don’t know. It’s probably the best of a bad bunch of matchups.

However the game this afternoon goes, you’d like to see the Hawks close with a flourish. Four-game losing streaks are not exactly how you want to hit the postseason, though the Hawks lost the last two last year giving up 67 goals in the process and that didn’t really matter once the postseason hit. And the Hawks defensive game has tuned up for the most part, save the 3rd period against Minnesota at home.

The Hawks are saying the right things about taking this one seriously, if for no other reason than to hit the finish line on the right note and feel good about what’s coming next. If this game doesn’t end up mattering though that will be seriously put to the test. After all, this is a team that’s had a hard time getting up for some games that did matter.

As for the lineup, Michael Paliotta will play, and I’m just going to guess it’ll be for Rundblad. But then he’s also right-handed, and I can’t imagine they want to flip him over to his off-side in his first NHL game, while they’ve had no problem making Rundblad as uncomfortable as fuck doing so so maybe he replaces Rozie? Or if the game doesn’t matter they wrap Keith or Hjalmarsson in cotton wool and preserve them for next week.

Scott Darling is getting the start, and let’s hope he pitches a shutout so we can listen to the soothing tones of Meatball/Italian Beef Nation scream for him to start Game 1. I could use a good laugh.

As for the Avs, they’ve taken the part of the schedule after they were eliminated pretty seriously,  clocking the Ducks and shutting out the Jets in the last week. They’ve also beaten the Preds in that time, though managed only 10 shots against a Kings squad that was apparently asking for it, was asking nice. Considering their record against the Hawks the past three or four years, you can forget the idea of them laying down and concentrating on their vacation plans until this 60 minutes is over.

Semyon Varlamov will get the final start, and seeing as how the Hawks have managed all of one goal against him in two games this season while hurling 78 shots, you can expect another annoying night of flailing until the Hawks decide they don’t give a fuck any more. Don’t know when that will be.

You’ve seen enough of these games against the Avs to know why they’re such a problem. As one of the few teams that are faster at forward than the Hawks, they aren’t too pressured when the Hawks try and squeeze them in the neutral zone because they can play at that speed. They can get behind the Hawks defense and catch the Hawks on the backcheck when they get caught. And Varlamov just continually bails them out when he’s facing Chicago.

Sorting out the penalty kill will also be something the Hawks look to do, as the Avs power play has crushed them in the past. But the rest should be about fine-tuning. The Hawks have kind of lost the right to just mail this one in, so if nothing else it would be good to see them get the small details right. If Varlamov makes 40 saves he makes 40 saves. It’s process, not results once again. Sadly, the Hawks haven’t quite gotten there with the process consistently. Doing so tonight will only slightly ease the nerves, but there are bigger hills in the future.

It's Like Looking In A Mirror, Only Not: Hawks at Oilers Preview/Pregame Thread/Eyebrow Threading 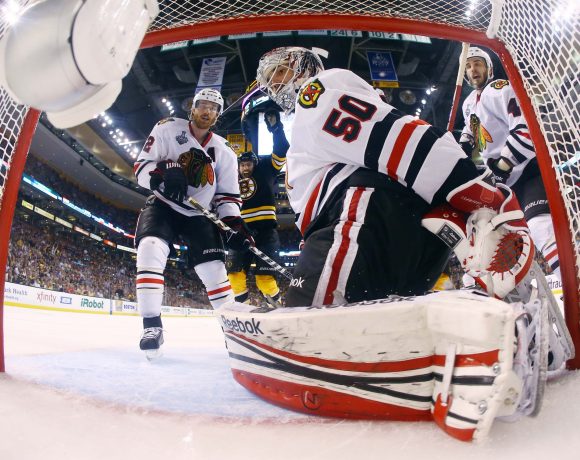