For the third time in less than two weeks, the fourth time so far this season, the Hawks will take on the Stars for the third and final time in Dallas. So if it feels like the Hawks are constantly playing the Stars within this newly christened (or re-christened depending on if they’re still viewed as a descendant of the North Stars) divisional rivalry, it’s because it’s kind of true.

When last seen, these Stars were skating out of the United Center a week ago with two points on the back of a 47 save performance from Kari Lehtonen, which is apparently only worth a third star if you’re dinosaur Tim Sassone. The decisive goal was provided by Antoine Roussel via a penalty shot, the first goal allowed in such a situation in Corey Crawford’s career. Between his celebration after that goal and his earlier fight with Andrew Shaw, it appears that Roussel is trying to single-handedly create a rivalry between these two teams, and based on  Brandon Bollig’s idiotic comments today in the press, it’s working.

But the Hawks are best served to allow Roussel to be the pecker that he is and focus on Jamie Benn and Tyler Seguin, who were reunited during the weekend when Seguin came back from his concussion suffered in the Hawks’ last trip to DFW, and promptly dropped three goals on the Flyers. They’ll be joined by the large Russian rookie Valeri Nichushkin, who had a goal himself last Tuesday. The aforementioned Roussel has gotten a bit of a promotion, now seeing time flanking the Ginger Ninja Cody Eakin, opposite Ryan Garbutt in a line basically consisting of three bowling balls. Rich Peverley is curiously still on a wing with Dustin Jeffrey (Alshon’s brother) centering, and Shawn Horcoff and Erik Cole remain together on a line as well, with Vern Fiddler and his mouth not going tonight. For all intents and purposes the lines look approximately as they did a week ago, with the glaring exception that Seguin is back in the mix.

On the blue line, Stephane Robidas remains out, and Trevor Daley has joined him on injured reserve with a high ankle sprain. That means the Hawks will get their first look at what the Stars hope is the future of the blue line in the third pairing of Kevin Connauton and Ent Jamie Oleksiak. Oleksiak is a gigantic 6’7″ and 243 lbs, though he lacks the raw natural fury to his game that say Chara or Pronger have at that size that might prevent him from truly dominating, even if there is sound position, range, and offensive polish all highly regarded in his skill set.

Once again Kari Lehtonen will get the call against the Hawks. The hope is that after 1 goal against and going 11 rounds deep in the shootout, and then stopping 47 in a victory, Lehtonen is due for his annual turd against the Hawks, but those games often come as a result of being hung out to dry by his d-corps and not just plain being bad. The Hawks are acutely aware of Lehtonen’s ability to win a game by himself, and it’s fresh in their memories.

As for our Men of Four Feathers, life without Corey Crawford officially begins tonight, as it was announced that Crow will miss 2-3 weeks with some kind of crotch issue, and Kent “Bottomless Pete” Simpson has been recalled to back up Antti Raanta, who was ehhhhhhhhhhh in relief of Crawford against a bad Panthers team on Sunday. Both Raanta and Simpson are smaller, more acrobatic goalies in style than Crawford, and the last time the Hawks had one of those in net, it was the Marty Turco show, and yikes. But even if it’s been a high wire act, Raanta has only allowed two goals in each of his starts, which should be enough for the Hawks offense. SHOULD BE.

The blue line in front of him will welcome back lost Hemsworth brother Mike Kostka to the lineup in place of Michael Rozsival, at least it’s assumed. As there’s been no report on the exact lines to this point. He could very well be in at forward, because stuff like that is just so fun to watch.

What these Stars want to do shouldn’t be a surprise at this point, and with Raanta now having to see a game against a non-squirtgun offense for a full 60 minutes, Quenneville would probably be best served in not throwing the Bollig-Kruger-Smith unit out against Seguin and Benn, especially on the road, and with two extremely green goalies dressing. But Q and his staff have been trying to convince the general public that Bollig is an actual NHL player for a while now, so why stop tonight?

At the other end of things, with the Stars out two of their top 3 defensemen (the #1 emerging as Brendan Dillon), there’s opportunity there for the Hawk forwards to once again pepper Lehtonen, but getting it past him will be an issue. Traffic in front and waiting an extra second if it’s there to pick a corner will make things more difficult for him, and hopefully lead to two points before another quick turnaround home. Let’s go Hawks. 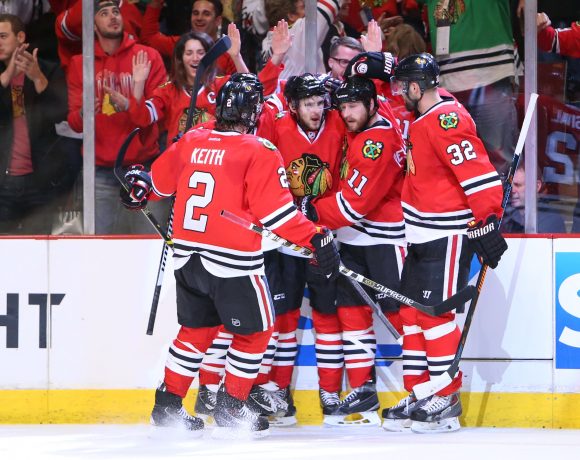