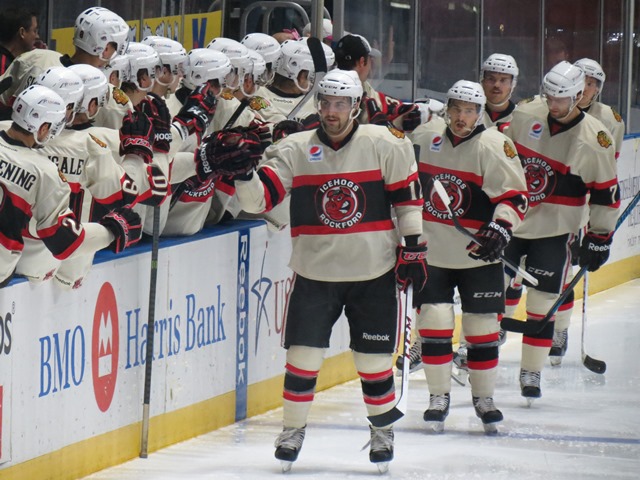 The IceHogs played in 3 games during the extended holiday weekend. 2 of the games were well played by the boys from RockVegas, while the other was one they would love to forget ever happened.

The IceHogs welcomed the Milwaukee Admirals into the BMO Harris Bank Center on Thanksgiving Eve. Kent Simpson and Magnus Hellberg played fantastic for Rockford and Milwaukee respectively throughout the whole game. As a result, the 1st tally of the contest wasn’t scored until the 3rd period when Joakim Nordstrom got the Hogs on the board with his 4th goal of the season. Milwaukee wouldn’t go down that easy though and tied the game up to send it into overtime. The Hogs were able to win it on a Mark McNeill power play goal in overtime. He had parked himself right in front of Hellberg and put home a Jeremy Morin rebound on the backhand.

-The IceHogs went 1-for-4 on the power play and killed off all 4 of Milwaukee’s man advantages.

–Jeremy Morin led the IceHogs with 7 shots on goal.

The IceHogs apparently had too much turkey to eat on Thanksgiving because on Friday night they crapped the bed—and that’s putting it nicely. A big hit by Joel Edmundson on Pat Mullane 1:50 into the game at the Allstate Arena set the tone and the Hogs were never able to recover. Kent Simpson was pulled at the 9:41 mark of the first period after 3 goals on 6 shots, but he didn’t necessarily have a whole lot of help in front of him. Mac Carruth came in to replace Simpson—who also didn’t have the best of help in front of him–and gave up 4 goals on 22 shots as the Wolves took the game 7-1; Terry Broadhurst scored the lone marker for the Hogs at 16:24 of the 3rd period.

–Jeremy Morin led the IceHogs again with 4 shots on goal.

–Brett Skinner recorded his 1st point in an IceHogs sweater with his primary assist on Terry Broadhurst’s goal.

-The lines and D pairs were different than Wednesday:

Saturday night’s game against the Wolves at the BMO Harris Bank Center started off with a bang. And stuffed animals. On Teddy Bear toss night—and in his 1st game back in the line-up since November 20th—Kyle Beach scored 21 seconds into the contest to give the Hogs a 1-0 lead. Beach stole the whole show on Saturday as he went on to record a hat trick—his first as a professional. The 3rd goal of his feat was a shorthanded goal to boot. Joakim Nordstrom also tallied in this contest off of a beautiful set-up and rush by Phillip Danault. Kent Simpson was steady in net and recorded 32 saves in this 4-3 Hogs victory.

-The IceHogs didn’t score on any of their 7 power plays and the Wolves scored on 1 of their 6 man advantages.

-It was Terry Broadhurst’s 25th birthday on Saturday.

-The lines and D pairs were different again:

–Phillip Danault played an outstanding game on Saturday night. From the drop of the puck, you could tell that he was determined to right the outcome from the previous night at the Allstate Arena. He was flying all up and down the ice, making good plays in all 3 zones in all situations, and also was the whole reason that Joakim Nordstrom goal happened. Danault was finishing his checks as much as possible as well.

-For being a scratch since November 20th, it was more than just on the scoresheet where Kyle Beach made an impact for the IceHogs on Saturday night. He was used a little bit on the power play and saw some minutes on the penalty kill as well. He was very composed and didn’t take any penalties. He utilized his shot to the best of his abilities, and that was key in scoring all 3 of his goals. It was good to see Beach have a big game–not only just for helping the team win, but for himself and his confidence as well.

–Klas Dahlbeck and Adam Clendening have turned into a solid defense pairing for Ted Dent and the Hogs this season. Clendening provides the offensive mind from the backend, while Dahlbeck’s more defensive minded—although he’s been putting up the points this season. The 2 sophomore AHLers have blossomed into reliable guys for the Hogs and will only get better with more time.

–Joakim Nordstrom has been on a line with Phillip Danault 9 out of last 10 games and the two seem very comfortable with each other on the ice. (Side note: normally, Mark McNeill is on the right side of that line). During that stretch, Nordstrom has scored all of his goals since being reassigned to Rockford from Chicago and getting back in the line-up after that minor injury he had. 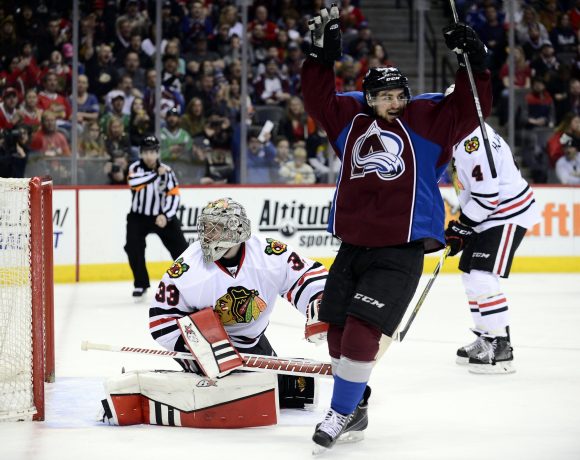