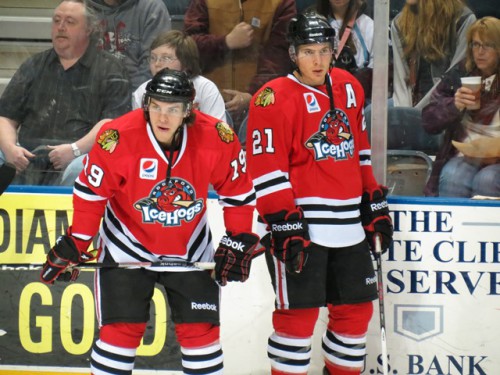 The Rockford IceHogs had another big week on tap for week 27 of the AHL schedule. Every point remained precious as they continued their playoff push.

The boys were at it on Wednesday, April 10th in Peoria to take on the Rivermen for the 3rd straight game and for the final time in 2012-13. The game was an ugly one as Rockford dropped the contest 4-0. Mike McKenna got the 36 save shutout for Peoria and Henrik Karlsson made 16 saves for the IceHogs.

The IceHogs held their final home game of the 2012-13 season on Friday, April 12th. The Hogs gave the BMO Harris Bank Center a show as they took the Chicago Wolves to the cleaners with a 7-3 win. Brandon Pirri racked up a 6 point game (1 G [a shorthanded goal], 5 A) while Ben Smith tallied a hat trick and an assist. Rostislav Olesz, Kyle Beach, and Jeremy Morin also scored for Rockford. Carter Hutton made 34 saves in the win. The Hogs fired 58 shots on Chicago netminders Matt Climie & Joe Cannata.

The following night, the Hogs were in Milwaukee to face-off against the Admirals. After a scoreless first period, the Hogs got second period goals from Adam Clendening and Ben Smith and then a 3rd period goal from Klas Dahlbeck. The final score was 3-1 and Carter Hutton stopped 20 of the 21 pucks that the Ads fired on net.

–Adam Clendening had himself a solid weekend. He played some absolutely great defense, especially on Saturday. He was very aware of where every puck was going, where every player was, his timing & spacing, his gaps, the whole deal. He was solid in all three zones, showing why this rookie is, indeed, an all-star.

–Garret Ross made his professional debut on Saturday night. In his first shift, he got into his first fight with Michael Liambas. Liambas gave him one good punch and Ross went down, but he popped right back up and continued hanging in there. When all was said and done, Ross came away with a bloody nose, which was also broken, as he tweeted after the game. Once he came back from his repairs, Ross had a good game overall. He finished his checks and didn’t make any noticeable mistakes.

–Ben Smith returned to the line-up from his wrist/hand area injury on Friday night and posted 4 points (3G, 1 A). Smith looked like he hadn’t missed any time at all and easily slipped right back into a top 6 forward spot in the line-up; he was on a line with Rostislav Olesz and Brandon Pirri.

–Shawn Lalonde had a spectacular game on Friday night. He was +6 and recorded the primary assist on Ben Smith’s first period power play goal. That plus/minus rating set an IceHogs AHL record for the best plus/minus rating in one game. Lalonde’s defense partner, Joe Lavin, also had a solid weekend on the blue line, especially in his own zone, where it matters most.

-Everything that Brandon Pirri touched on Friday night turned to gold. His 6 points was an IceHogs AHL era record for most points in one game, and he tied the record for the AHL this season with 6 points in one game.  He was named first star. Pirri just couldn’t do anything wrong against the Wolves and watching the show he put on was quite a lot of fun. It wasn’t even just his offense; his defense was pretty good as well.

-The only game that Phillip Danault and Mark McNeill played in during week 27 was against Peoria on Wednesday. Danault didn’t see much/any ice during the 3rd period. McNeill was used early on in the game on the power play.

–Klas Dahlbeck’s goal on Saturday against the Admirals was his first AHL goal. Even before his goal in the 3rd period, he had been having a solid game overall, making many solid defensive plays and breaking up some dangerous rushes.

–Carter Hutton played very well in net on Friday and Saturday and was exactly the calming influence/big save maker that the Hogs needed in between the pipes to keep them focused on their jobs.

-Here are the lines and D pairs from Friday and Saturday.

-Here are the IceHogs’ team awards that were handed out before Friday’s game at the BMO Harris Bank Center: 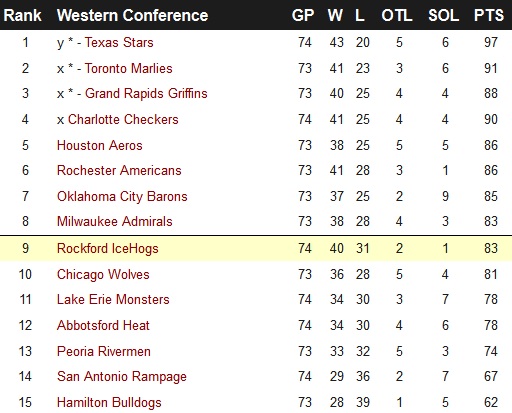 The IceHogs close out the 2012-13 regular season with 2 games on the road in week 28 of the AHL schedule. For Rockford to make the playoffs, they need to win both of these games and hope that Milwaukee and Chicago drop, at least, the game they both have in-hand.