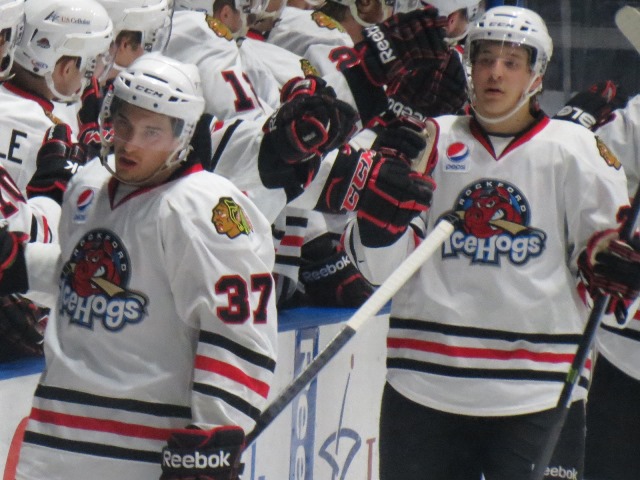 The IceHogs traveled down to Oklahoma City to end week 22 of the AHL schedule and hosted the Rochester Americans to begin week 23. After finishing February with a record of 9-0-1-1, March didn’t start off the best way for the IceHogs.

The IceHogs ended February with a Friday tilt in Oklahoma City against the Barons. Despite getting out to a 2-0 lead in the first period, courtesy of Bobby Shea and Terry Broadhurst, the Barons tied the game up early in the second period. Rockford was able to regain the lead twice more, with Broadhurst and Shea scoring again, but OKC was able to tie the game back up every time. The game went into overtime tied at four, but Tyler Pitlick scored the game winner for the home team.

-The Barons outshot the IceHogs 37-36; Jason LaBarbera was in net for the IceHogs.

-The IceHogs did not convert on either of their power plays and the Barons tallied on two of their four man advantages.

-Defenseman Bobby Shea was +3 on the night for the IceHogs while center Joakim Nordstrom was -3.

-The scratches for the IceHogs were:  Viktor Svedberg (injured), Theo Peckham (suspended) and Wade Brookbank (healthy).

Saturday’s game featured the IceHogs playing catch-up instead of the Barons. The home squad got out to a 2-0 lead before Jeremy Morin and Adam Clendening tied the game up at two in the second period. OKC restored its lead with goals about three minutes apart later on in the sandwich stanza. Brad Mills and Brandon Pirri once again tied the game for Rockford, but Austin Fyten scored at 16:11 of the third period to give OKC a 5-4 win for the second night in a row.

-The IceHogs outshot the Barons 35-34; Kent Simpson started in net for Rockford, but was pulled in the second period after he let in three goals against.

-The IceHogs scored on one of their six power plays while the Barons tallied on two of their four man advantages.

-Forward Alex Broadhurst had a penalty shot in the second period, but was not able to score on it.

-The scratches for the IceHogs were:  Viktor Svedberg (injured), Brett Skinner and Wade Brookbank (healthy).

On Tuesday, March 4, the IceHogs hosted the Rochester Americans at the BMO Harris Bank Center. Jeremy Morin got the IceHogs started on the right foot with an absolutely beautiful goal in the first period as he walked around a defenseman to score on Americans goaltender Nathan Lieuwen. Pat Mullane followed up less than a minute later to make it 2-0. Terry Broadhurst made it 3-0 during the middle frame. Rochester made it interesting in the third period as the Americans cut their deficit to one, but Brandon Mashinter added an empty net goal with eleven seconds left to make the final 4-2 IceHogs.

-The Americans outshot the IceHogs 35-29; Jason LaBarbera was in net for Rockford.

-The IceHogs failed to convert on all nine of their power plays while the Americans scored on two of their five man advantages.

-Defenseman Adam Clendening was a +3 on the evening.

-The scratches for the IceHogs were:  Viktor Svedberg (injured), Wade Brookbank, Brett Skinner and Philippe Lefebvre (all healthy).

-The lines and D pairs were:

–Wednesday, February 26 – The IceHogs traded defenseman Zach Miskovic to the Iowa Wild for future considerations. The Blackhawks traded forward Brad Winchester to the Minnesota Wild for defenseman Brian Connelly, who was then assigned to Rockford. Defenseman Bobby Shea was recalled from Toledo (ECHL).

–Tuesday, March 4 – The Blackhawks got defenseman Mathieu Brisebois in a trade and assigned him to Rockford.

–Jeremy Morin continues his fantastic play for Rockford—I feel like I’ve typed this before… He was amazing on Tuesday night for Rockford. He looked like a man on a mission out on the ice and was doing almost everything right.

–Mark McNeill may not always be up on the scoreboard, but he’s playing solidly for Rockford. He’s always creating or getting great scoring chances. He’s also always making sure he finishes his checks. He’s a very smart player and is a mainstay on the penalty kill.

-Before the trades went down, the top line was Brandon Pirri between Brandon Mashinter and Garret Ross. Drew LeBlanc now centers the second line between those two wingers so it will be interesting to see how they adjust to having someone else down the middle. The line looked fine on Tuesday. It was kind of quiet, but it was also just one game.

-The IceHogs now have a record of 30-22-5-3 (68 points) and sit in the sixth spot in the Western Conference standings. 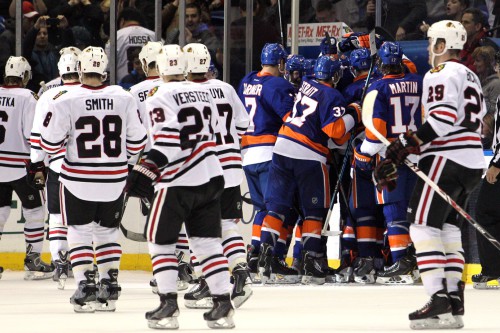 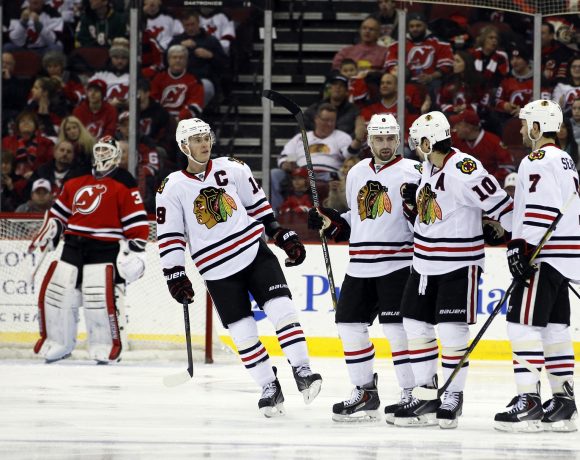