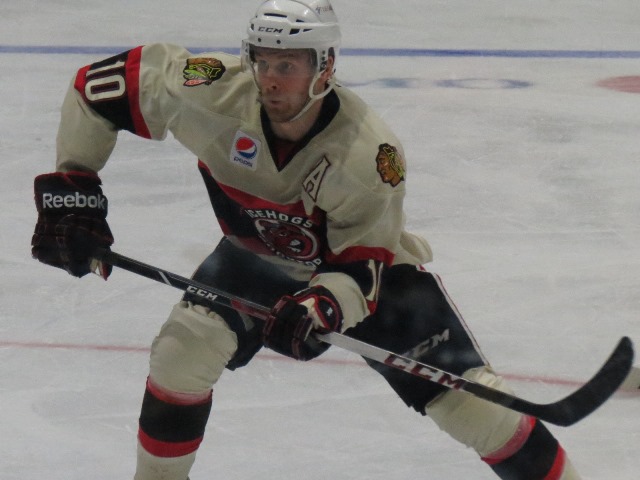 The 27th week of the AHL schedule brought the IceHogs to Canada for one last time during the 2013-14 regular season. Before heading back to the BMO Harris Bank Center for some home games, the IceHogs stopped at the BMO Harris Bradley Center in Milwaukee to kick off week 28.

On Friday, April 4, the IceHogs played the first of their two game set against the Abbotsford Heat in Abbotsford. Despite Mark McNeill getting the IceHogs on the board first 3:05 into the game, the Heat stormed back with 3 goals before the end of the first period. Alex Broadhurst brought the IceHogs within one 49 seconds into the period, but the Heat tallied twice more to make it 5-2. Adam Clendening also scored for Rockford in the second period, and with a third period empty net tally, the Heat took the game 6-3.

–Jason LaBarbera started the game in net for the IceHogs. He was pulled in favor of Kent Simpson in the second period after allowing 4 goals on 12 shots.

-Defenseman Adam Clendening and forward Garret Ross led the IceHogs with six shots on goal each.

-Defenseman Stephen Johns made his pro debut on Friday night. He donned no. 36, was +1 and fired 3 shots on goal. He was paired up with Brian Connelly on the backend.

-Y’all might get a kick out of this one:  Brandon Mashinter fought Shane O’Brien during the first period of this contest.

-The IceHogs scored on 1 of their 6 power plays and killed off 2 of Abbotsford’s 3 man advantages.

Saturday’s game was a case of having to battle back from a deficit the whole night for Rockford. Abbotsford got out to a 3-0 lead in the first period and never looked back. Garret Ross got the IceHogs on the board in the second period with his 15th goal of the season, but Sven Baertschi restored Abbotsford’s lead in the third period. At 6:40 of the third, Adam Clendening brought the IceHogs within 2 and at 10:06, Stephen Johns cut the Rockford deficit to one with his first career professional goal. But with 32 seconds left, Abbotsford added an empty net goal to seal their 5-3 victory.

–Kent Simpson started in net for the IceHogs, but was pulled in favor of Jason LaBarbera in the first period after giving up 3 goals on 4 shots.

-Forward Ryan Hartman picked up his first 2 professional points with his primary assist on Garret Ross’ goal and his secondary assist on Adam Clendening’s goal. Hartman was also +2 on the night.

-For those interested in who got the helpers on Stephen Johns’ first career pro goal, the lone helper was fellow defenseman Theo Peckham.

-Forwards Terry Broadhurst and Mark McNeill and defenseman Stephen Johns led the IceHogs with 4 shots on goal each.

-The IceHogs failed to convert on their lone power play and they killed off one of Abbotsford’s two man advantages.

Tuesday’s game in Milwaukee did not get any better for Rockford. Milwaukee got out to a 1-0 lead in the first period and kept their lead for the whole game. The Admirals added to their lead in the second period to make it 2-0. Mark McNeill tallied early in the third period to bring Rockford within a goal, but the Ads tacked on a power play marker at the 13:46 mark to give them a 3-1 win.

-The IceHogs outshot the Admirals 26-20.

–Jason LaBarbera was in net for the IceHogs.

-Forwards Phillip Danault and Mark McNeill led the IceHogs with 4 shots on goal each.

-The IceHogs failed to convert on any of their 6 power plays and the Admirals tallied on one of their 5 man advantages.

Wednesday, April 2 – Defenseman Stephen Johns was signed to a PTO after he inked his NHL entry level deal with the Blackhawks and defenseman Joe Gleason was sent down to Toledo (ECHL).

Thursday, April 3 – Goaltender Mac Carruth was reassigned from Florida (ECHL) to Rockford by the Blackhawks.

Sunday, April 6 – Defenseman Brett Skinner was signed to another PTO.

-I didn’t see the Abbotsford games, but Stephen Johns played well against Milwaukee in his third pro game.  He looked comfortable on the backend, especially in the offensive zone. He made some smart pinches to keep plays alive. He was also solid in his own end. For the majority of the game, he was paired with Klas Dahlbeck and they seemed to make a good tandem.

-A lot of the IceHogs’ shots on Tuesday came from far out and there was little traffic in front of the net. When there were loose pucks in front of Milwaukee’s crease, there were very few times when Rockford players were in position to grab them. Most of the time, they were a step slow to those pucks.

–Ryan Hartman looked good again on Tuesday. He was out on the ice during a penalty kill, but that was more or less likely because the Hogs were down a goal and head coach Ted Dent was looking for some offense to tie the game with the minutes winding down. 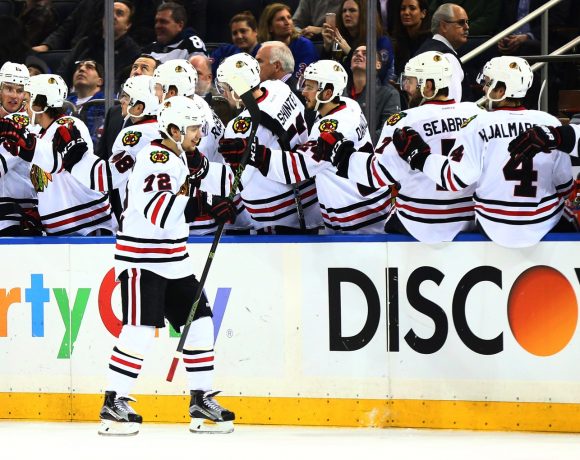 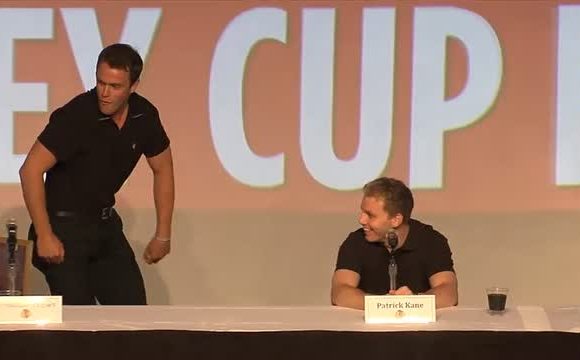