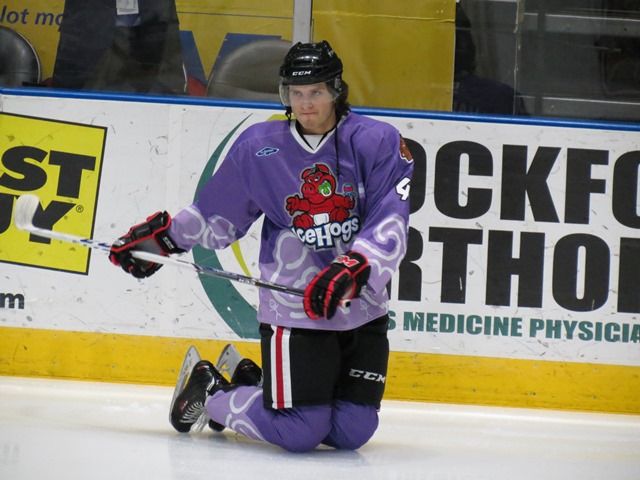 Week 26 of the AHL schedule featured the IceHogs playing three games in three nights over the weekend. The IceHogs needed to win at least two of their three games, especially with the three contests all being against Midwest Division teams.

First up for the IceHogs was a home match-up against the Grand Rapids Griffins on Friday night at the BMO Harris Bank Center. After falling behind by two relatively early in the first period due to two power play goals by Landon Ferraro, the IceHogs stormed back with five goals. Brad Mills got the IceHogs on the board with a late first period marker. Defensemen Adam Clendening (PPG) and Mathieu Brisebois tallied in the second period to give Rockford a 3-2 lead. Clendening and Brian Connelly (PPG) scored in the third period to give the IceHogs a three goal cushion. The IceHogs needed every one of those goals as Grand Rapids scored twice to bring the score to 5-4 before the final frame was over, but Rockford was able to hang on for the victory.

-The IceHogs outshot the Griffins 33-27; Jason LaBarbera was in net for the IceHogs.

-The IceHogs scored on two of their three power plays and the Griffins tallied on four of their seven man advantages.

The following night, the IceHogs traveled up to Grand Rapids to finish their home-and-home series against the Griffins. Saturday night’s contest did not go as well for the IceHogs as they dropped an important tilt, 4-1, despite Alex Broadhurst opening the scoring up in the second period. Grand Rapids then scored four unanswered goals from there on out.

-The Griffins outshot the IceHogs 29-23; Jason LaBarbera was in net for the IceHogs.

-The IceHogs were unable to score on all five of their power play opportunities whereas the Griffins scored on one of their two man advantages.

The IceHogs traveled back to Rockford for a Sunday game against the Chicago Wolves at the BMO Harris Bank Center. Almost every time the IceHogs tried to pull away on the scoreboard, the Wolves would fight back. Mark McNeill gave the IceHogs the first lead of the game with his 16th goal of the season in the second period, but Ty Rattie tied the game up just over a minute later.

Forwards Joakim Nordstrom and Brandon Mashinter (PPG) then gave the IceHogs a 3-1 lead, but Chicago knotted the game up at three in the third with two early goals. Brad Mills tallied a power play marker just over halfway through the final frame to put the IceHogs back in front; the home team never looked back. The IceHogs picked up a 6-3 win as Mashinter and Phillip Danault recorded empty net goals.

-The IceHogs outshot the Wolves 38-31; Kent Simpson was in net for the IceHogs.

-The IceHogs scored on two of their five power plays and the Wolves tallied on one of their six man advantages.

-Defenseman Klas Dahlbeck was a +3 on the evening for the IceHogs.

-The IceHogs wore purple “Hamlet” March of Dimes jerseys on Sunday. They auctioned the jerseys off after the game in a live auction.

–Kent Simpson played well in net for the IceHogs on Sunday. It was the first time in his last few starts that he actually got some help in front of him. He made many good saves, including two big saves to start the third period.

–Brad Mills has been playing very well lately for Rockford in all areas of the ice. Not only is he being used on the penalty kill and power play—and is excelling  in those situations—he has been scoring goals which is something the team needs, especially with guys like Jeremy Morin and Brandon Pirri not on the roster anymore.

–Mathieu Brisebois is fitting in very well with the IceHogs. Not only did he score his first goal in an IceHogs sweater on Friday night, but he appears to be adjusting to the systems well. His heavy shot from the point is something the IceHogs can take advantage of in the offensive zone.

–Ryan Hartman made his professional debut on Sunday for the IceHogs. After his Plymouth Whalers got knocked out of the OHL playoffs, Hartman arrived in Rockford and did not look out of place. He fit right in with the way the IceHogs play and looked comfortable. This is good news for the IceHogs in the future. Once he gets more adjusted to the pro game, he will hopefully become a big part of the team.

-The IceHogs now have a record of 33-26-5-4 (75 points) and are in 7th place in the Western Conference standings. Charlotte is tied with them in points, but Rockford has a game in-hand. 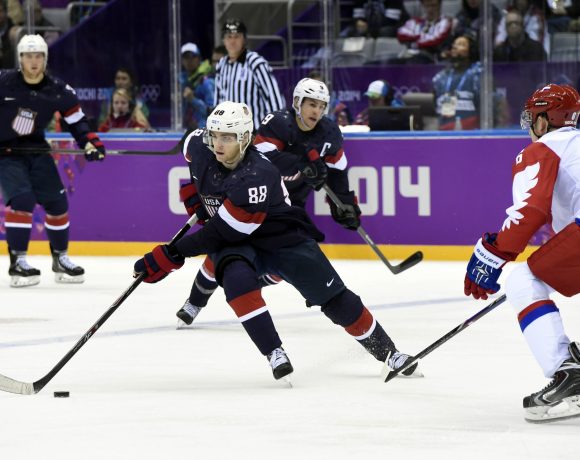 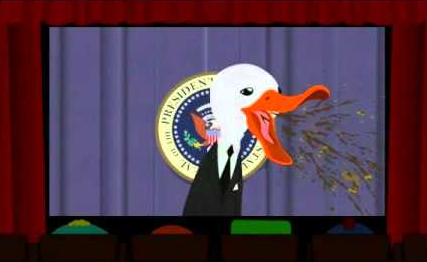 Watching The Party – FFUD’s 1st Round Preview: Ducks vs. Sharks or Impetigo in My Armpit