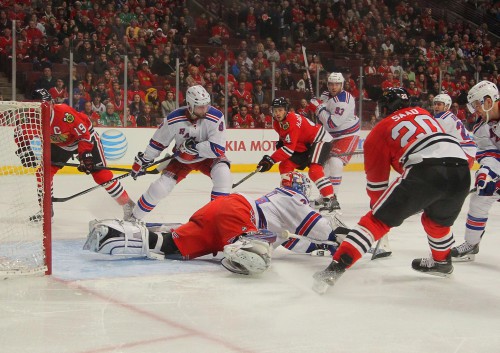 That one stung a bit. I really wanted that one, and I’m guessing after Q’s mini-explosion at practice yesterday the Hawks did too. It feels weird to say after a tough loss like that, but there were more positives than negatives coming out of it. The negatives are just more glaring.

Still, after a 1st period that wasn’t as one-sided as the shot board would have you believe–the attempts were even–the Hawks held a very potent Rangers team to just 19 shots the rest of the way. They out-attempted them too. Talbot didn’t have as many big saves to make as Crawford did, but he made them just as well.

Sadly, the Rangers are one of the teams you don’t want to see 4-on-4 (though that list is getting larger) and it didn’t take long before the Hawks were made to pay for the slower pace they play at right now.

If you want to be positive, 4-1-1 without Kane and Oduya (and Oduya’s presence looks pretty vital right now) is a pace you’d take. There are a couple softer games up the next week with Arizona and a free-falling Sharks team. Yes, they’re both on the road but they’re still doable. It’s a point gained on the Wild, who had been roaring up on the outside like Easy Goer. It’s five back of the Preds, who look the more likely to be caught than the Blues.

It stings, but it’s not the end of the world. Let’s do how we do.

-Right at the top, this one was lost on the power play. A team with this much talent, even without Kane, has go to make one of the four power plays they got count. Their problem is it has no real QB.

It’s kind of amazing that Duncan Keith piles up the points he does, because his offensive instincts trail his defensive ones by a large margin. On the power play, he really has no feel of what he’s supposed to do. He often picks the wrong, harder pass. He’s extremely hesitant to keep carrying the puck even when he’s got room. He has a hard time creating a shooting lane for himself, or taking advantage of one he’s given. I don’t want to lay it at his feet, because it’s not all on him. But he’s a big reason they have such a hard time entering the zone. He even has a wonky feel of when and where to dump the puck when that’s required.

There are two better QBs on the roster. Brad Richards hasn’t wowed while doing it this season, but he’s only been doing it for a decade so there’s something systemic that the Hawks do on the power play that makes it not work. While Kimmo Timonen has a long way to go, on the power play is probably the one time he can let loose a little. He’s also only been running one of these for a decade. It’s worth a shot, because what are the Hawks holding on to now?

-The other issue is scoring overall. Counting the game Kane got hurt, the Hawks have scored 11 goals in six games. Clearly, that’s not going to get it done. They’ve been shutout twice.

It’s at these times that Q is usually tempted to hit the blender again. However, what we learned in the early part of the season is that his players respond better when given time to play with the same guys over and over. They’ve said though themselves. Each line has produced good things in the past couple games, and Q has to stick with it.

Of course, he’s got something of a problem on the 3rd line. We can be sure Bickell will come back in for Carcillo in Glendale. But both Bickell and Sharp can’t really play the right side. To get someone who can would involve re-jigging the whole thing again. Put Bickell with Toews and Hossa and let Versteeg play with Richards and Sharp? I doubt that’s coming, but it would allow Toews and Hossa to stick toghther, Saad-Vermette-Teravainen to build on what they started tonight, and the 4th line to continue to be effective as they have been. It’s the easiest solution right now, which is why I’m sure it won’t be the one taken. Q will get three days here, I’m guessing two practices, to figure it out.

-It’s one thing to amass a lot of speed, and it’s another to know how to use that speed to play defense. It’s the lesson the Oilers and Avalanche have never gotten. The Rangers sure do. Their defense is so mobile they can cut off the puck around the boards. Their forwards know where to be and pressure all the lanes making it hard to connect with passes. They win those races. Nothing I saw tonight dissuaded me from thinking this is the deepest team in the East. Their defense is deeper than Pittsburgh’s without Maatta. They have more forwards than the Habs. They’ll have a better goalie than Tampa. Their blue line is miles ahead of Detroit’s, though the forwards probably don’t quite have the star power. Alain Vigneault may be a Bond villain, but he’s no dummy.

-This Michal Rozsival thing is getting close to Michal Handzus territory. He was awful in the 1st period, and his passing is supposed to be the one thing he can do. Teams can enter his side of the zone at will. Keith leaves too much space cheating over to cover.

I don’t know what the solution is here. I heavily doubt Trevor van Riemsdyk can get up to speed enough with just a month to be trusted in the playoffs. Timonen looks a long way from being a guy who can be part of a five-man unit that Q goes with in the playoffs, though I have faith he’ll get somewhere near there if not there completely. Oduya’s return would help, and I would feel just as good giving Rundblad the 12 minutes that Rozsival should be restricted to anyway.

-I bet it drives a section of Hawks fans nuts that the most smooth running thing on this team right now is Corey Crawford. He may be required to play better than he ever has come April and god willing May. He looks like he’s poised to do just that.

-Twitter was ablaze with debate over Teuvo in overtime. Yes, that’s his guy but it’s a tough play. He can see Brassard coming down and he can also see how quickly Toews can pressure the puck from behind. But he also has to cover the middle of the ice long enough for Toews to recover and then get out to Brassard. He was late, but considering he was the most threatening Hawk all night, we’ll live with it.

For those scared that Q is going to sour on him now, I urge you to check out Q’s quotes about him the past few days. This isn’t Morin or Pirri. Q really likes Teuvo and he’s not going to go from inserting him on the top six and first shift in OT to scratching him. Especially with the opposition coming up. At least I would be surprised if he does, and I stopped being surprised by Q long ago.

On to the next, and there’s stuff to build on from this one. 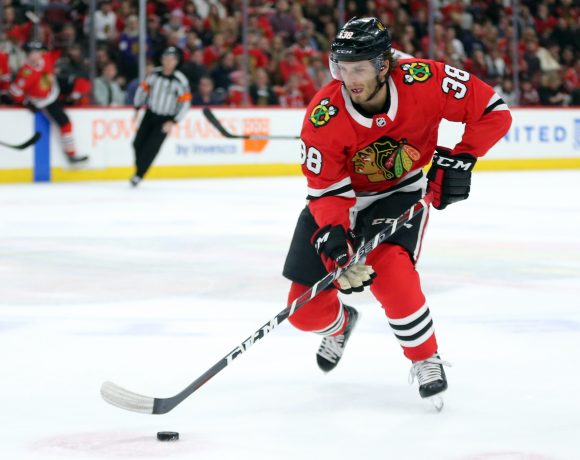