Once again, we were asked to eulogize the St. Louis Blues upon their exit from the playoffs for Yahoo!’s Puck Daddy Blog.

That’s a phrase we’ve gotten used to around these parts. Upon this day when we come to mourn/kick dirt/wildly celebrate yet another Blues playoff exit before anything a banner would be raised for, It’s time to consider that. We heard it five years ago, when another continually good-but-not-good-enough team hellbent on measuring its manhood every shift beat a deeply flawed Hawks team, took the most amount of time to do it, and celebrated as if it was discovered drinking beer gives you superpowers. A team with Cup aspirations screaming out its lungs needing every bounce and break to beat a third-placed team. It was Vancouver then. It’s St. Louis now. That’s some company you keep, Blues.

The Blues told us that triumph in the 1st round signalled that everything was different. This win proved that they’d learned their lesson. No longer was this a disgusting organization run by calculating, ham-handed, born-on-third executives with a section of their fandom doing their best to prove that evolution does not actually exist and become the scorn of the rest of the hockey world.

Oh wait, we’re supposed to be talking about the Blues and not the Hawks. Sorry, back to that.

And in a certain respect, the Blues couldn’t help but better serve their entitled, conspiratorial northern rivals even in pyrrhic first-round victory. In the near term, the Blues did many Hawks fans a favor by euthanizing an interminable season like so many of David Backes’ dogs, one marred by one tone deaf scandal after another. After over 8 months of screaming belligerence (and much worse) from the very vocal majority of its myopic fanbase, it was the only fate the Blackhawks ever deserved, and the Blues are now merely incidental to it. Now a very flawed, exhausted, Trevor Van Riemsdyk-dependent team was put out of its misery, and the Blues are a mere footnote in the historical narrative of this playoff year as they always are. It’s never about you, St. Louis. It never will be.

And in the long term, the Blues advanced just far enough for the completely static Doug Armstrong to learn the wrong lessons from his aging, unidirectional core and bring the whole gang back next year another year older. But at least Doug doesn’t “circumvent the rules” and use the LTIR provision in the CBA to his advantage. He’d rather totally not blame injuries by kind of sort of blaming injuries while not admitting to himself and the public that the Blues are a capped out budget team that the locals barely bother to gas up the ‘87 S10 for. And they don’t turn out more than likely because their disability settlement from the local Dirt Cheap liquor store they used to work at and “accidentally” fell off a ladder from doesn’t quite cover the cost.

Even in victory, the Blues’ achievements are still only defined by other teams. The franchise has been meaningless since Day One, when their visits to the Final were merely a function of only the new expansion franchises playing one another in the post-season. This is a team that has fired the top three winningest coaches in the history of the league in Scotty Bowman, Joel Quenneville, and Al Arbour, and currently employ the fourth in Ken Hitchcock, and have literally nothing to show for any of the four of them. And Hitchcock will assuredly be fired (or OD on Nutter Butters) as the current window for this franchise slams shut.

What a postseason it was for the blubbering blowhard from Alberta. An extended congratulations to Jabba the Hitch for winning his most postseason games in a decade, yet somehow only being out of work for one season during that timeframe. It takes a special kind of con man to win a combined 12 playoff games in ten years and yet consistently be mentioned as one of the top coaches in the league. Those three years in Dallas at the turn of the century must have really been something. But hey, hockey didn’t exist in Chicago back then so we can’t actually say for sure.

This year, when creepy Uncle Ken wasn’t passive aggressively complaining about the officials in post-game pressers, he was busy deploying his most dynamic offensive weapon in the worst ways possible.

Let’s take the Western Conference Final as the most recent (and perhaps) best example.

You don’t need to be a hockey blogger to know that Marc-Eduoard Vlasic is the best defensive defensemen in the league. The guy is one of the best six defensemen born in Canada. A country where they crap fiberglass, turn them into composite sticks and sell them to stupid Americans for $350 a pop. He was a gold medal winning defensemen in 2014 on one of the deepest tournament teams in history. And oh by the way, it was also A TEAM THAT KEN HITCHCOCK COACHED.

So if anyone should know that Vlasic is capable of stifling offensively gifted players, it should be Jabberjaw. In a series where the Blues had home ice advantage and the ability to dictate the matchups the majority of the time, Colonel Beefcakes decided it would be in his best interests to match Tarasenko against Vlasic 60% of the time. Instead of letting Brouwer, Backes and the rest of the slobbering fools who weren’t going to score unless they had three undefended shots at an empty net get shutdown by Vlasic, Hitchcakes decided to use his best offensive player as the guy to neutralize Vlasic.

How did that turn out for everyone?

Don’t worry, though. I’m sure Tarasenko has already forgotten all about it. It’s not like Russians are known for having long memories. Just ask Nina from the Americans. Oh wait. You can’t.

Fox Sports Midwest reporter Andy Strickland, famous for this tweet, sent out some very encouraging notes while finishing his coverage of the Blues. My favorite missive was this one, where he compared the Blues to the 2009 Blackhawks. First, I’m sure Blues fans love thinking about the beginning of the Blackhawks run of success that’s packed more hockey angst into half a decade than a Charlie Gitto’s cook shoves hamster testicles into those toasted raviolis. Second, if you want to escape the shadow maybe use a different comparison. That 2009 Chicago team oldest major contributor was Brian Campbell at 29. Half of this Blues roster is currently putting off their prostate exams for as long as possible.

Speaking of aging, we may have seen the final game in a Blues sweater for the captain David Backes. His tear soaked soliloquy (in which he very likely admitted that Steve Ott gave him stolen pain pills) was not because he was sad that he lost. No, he’s very used to losing by now. It’s the only thing he’s ever done. He was crying because he started picturing himself in a Winnipeg jersey for the next four years. So goodbye Captain America. We’ll never forget the years of chasing hits, going to the box at the worst possible time, and year after year of playoff failure. I hear Winnipeg has tons of feral dogs so I’m sure he’ll have his hands full once the playoffs start and he’s not involved.

If Hitchcock finally gets fired and Backes goes the way of krokodil addict Barret Jackman, it’ll mean the end of an era. If the Blues rid themselves of human scabies like Steve Ott, AHL fourth liner Scottie “I Swear I’m An Adult” Upshall, and smoldering diaper Kyle Brodziak – all they’ll truly have left is Ryan Reaves who is more useless on ice than three month old seafood, although both are just as likely to seriously injure someone.

But hey, at least the Blues aren’t going to move to Los Angeles.

#ThisTimeWillBeDifferent. And it was in a way. The Blues finally were presented with opponents in the playoffs that had more gaping holes than they did. They were able to push over the hobos when they got tired. And then they saw Drederick Tatum and it was over. Now they can disappear back into the underground garbage fire that is the foundation to that city (no, literally, it is). And we can do it all again next year.

A Farewell To WGN 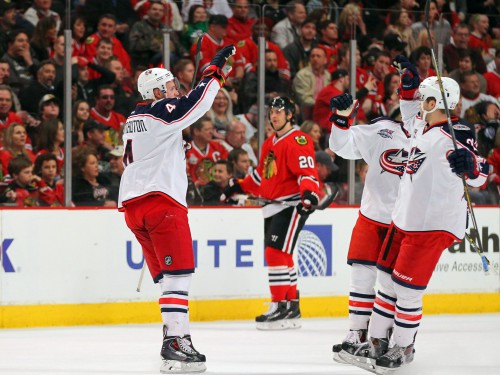