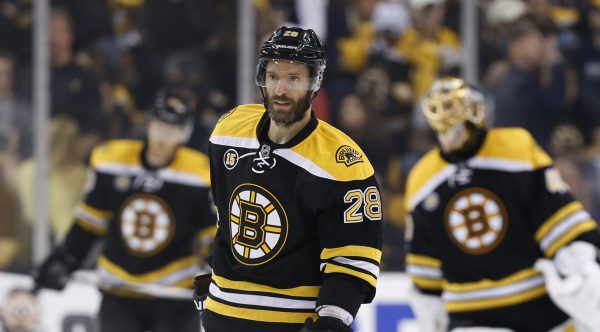 Sometimes you just have to face reality. And while I would like to sit here and stamp my feet and throw my toys out of the crib, screaming to everyone how important Kruger has been for six years, that’s not going to do anyone any good. Though it might feel good. As previously discussed, there really isn’t anyone in-house who can pick up the slack. The Hawks will try and claim it’s Working Class Kero. The only problem with him is that he’s bad. They may think Vinnie Hinostroza could do some of it, and yet I remain unconvinced he’s anything other than a really fast skater with decent finish for the 8-12 chances he’ll get per year (which is better than Kruger in one category, I suppose).

This of course won’t be able to see who the Hawks could bring in via trade if they do flog someone. We’ve generally thought the Hawks are trading for d-men anyway if they can fit a new one in under the cap. So who’s out there for dirt cheap on the open market?

There are a couple names. They all fit in the same category, in that they’re going to be old, on a one-year deal, and come with risk that they might actually be dead.

The first one that pops up is Dominic Moore. He’ll be 37 when the season starts, made $900K in Boston last year and isn’t going to make any more than that. While faceoffs are overrated, there are times when the Hawks will need someone other than Toews to win one, mostly on the penalty kill. Moore can still do that, winning over 53% of his draws. He’s still a decent penalty-killer as well, which is another role the Hawks will have to fill when Kruger is put in a box labeled, “To Timbuktu.”

Another name you might see is Vernon Fiddler, who’s even older. But unlike Moore and Kruger, Viddler doesn’t turn the ice for you while taking the dungeon shifts, and he’s certainly not going to do it at 38. He can still win a draw and kill some penalties for you, maybe, and he might still annoy the piss out of an opponent or two. But he’s decomposing, and there’s a reason he couldn’t scratch the Preds’ lineup most nights.

Another name that could get intriguing is John Mitchell from Colorado. He’s younger than the first two, as he’ll turn 33 during the season. He’s good at the dot and has been a pretty good penalty killer for the Avs for a few years. He took their worst shifts, zone-start wise, and while he also is no Kruger in getting a team back the other way, some of that is the dogshit he played with and he was more than serviceable in that area. The question here is price. Mitchell made $1.8 million last year and that’s probably more than the Hawks can afford. At only 32 now he may want to match or exceed that, unless he can be convinced that this is his best landing spot for role and chance to win. Any sort of bidding war for him is going to rule the Hawks out.

The dream, if you’re truly warped, would be Brian Boyle. But after getting Toronto hype for just half a season and also being 32, he’s probably going to get north of the $2 million he made last year. Boyle is the only one who would be anywhere near reasonably priced who does what Kruger does, start in his own end against tough competition and help send the play the other way. Which is probably why he’s going to be awfully expensive. And paying someone exactly what you paid Kruger to do what Kruger did isn’t going to get you anywhere.

So there are options, they’re just not anything that’s going to blow anyone’s skirt up.