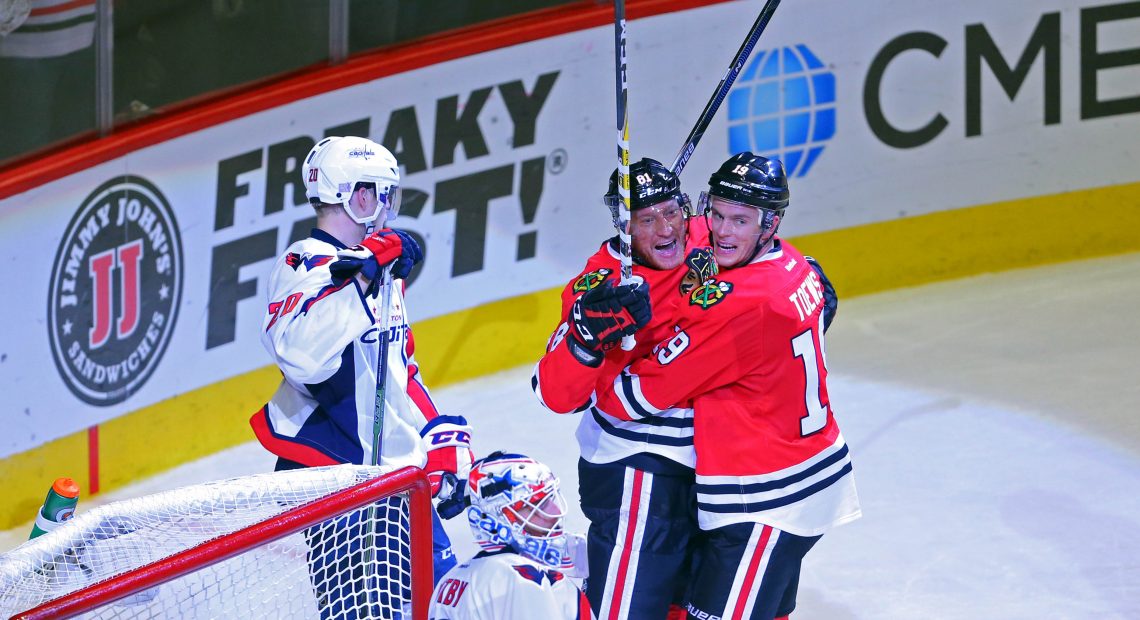 You know things are breaking the Blackhawks way when they’re able to successfully recreate the winning shot from the 1984 NCAA Men’s Basketball National Championship on ice. In the final ten minutes of the third period, the Capitals played about as good of team defense as one team could hope for while protecting a lead. The Blackhawks were having difficulty A) establishing possession in the offensive zone B) completing a pass and C) generating any type of shot towards Braden Holtby.

So it’s only fitting that on a pass that was deflected by the Capitals, Artemi Panarin’s turnaround fade away three…er, blind, off-angle slap shot from 60 feet away somehow found its way through four sets of legs and right on to Marian Hossa’s blade for an easy tap-in tying goal.

In overtime, 3-on-3 hockey stuff happened. Vinnie Hinostroza was tripped up by a flailing T.J. Oshie clearing a path for a 2-on-1 that may as well have been a slam dunk.

Not the end of the world. Particularly when the Hawks were able to grab a point in the waning moments when they probably didn’t deserve to. But deserve’s got nothing to do with it.

–Maybe not getting the dungeon starts provides a better glimpse of Marcus Kruger. Or perhaps it’s just because he was playing with two players playing better than anyone else on the planet. Either way, Kruger sported a 67% share. Kruger also had a few golden opportunities to score but was turned away by Holtby. Anisimov is scheduled to come back  on Sunday so Kruger heads back to being Lord of Bumsville.

–The line of Hinostroza, Hartman and Tootoo had a pretty solid game. I guess it shouldn’t come as that big of a surprise. They can match the physicality of the Capitals while also being a plus speed line.

It would’ve been interesting to see what the call would’ve been had Tootoo not biffed a wide open net in the first period. Hinostroza seemed to prevent Holtby from making the save but maybe he was pushed? I don’t know. I would assume it wouldn’t have counted but  it all depends on the referee.

–Speaking of physicality, Forsling got pasted a few times last night. In the past when the Hawks have had smaller, less physically mature players, they’ve been on the front end so it’s easier to hide or avoid contact. On defense, it’s very hard to avoid opportunities where Forsling is vulnerable.

Walking turd Tom Wilson plastered Forsling in the first period on the blue line that led to an odd man rush for the Capitals.

Then he makes passes like the one to Hossa that set up Brian Campbell’s goal and you see why the Hawks are willing to roll the dice on whether he’ll make out of a game in one piece.

In a 7 game series against Washington, I’d have to think Rozsival would be the go-to guy in the 6 spot. But it’s November and this wasn’t a 7 game series.

–Oh hey, there’s Corey Crawford making a bunch of ridiculous saves again to keep his team in the game.

–Panik, Desjardins and Dr. Rasmussen. A bad law firm and an especially bad line to play more than 10 minutes in a NHL game.

–Sunday, the Canadiens come into town. The over/under on Andrew Shaw’s “thank you” video is set at 3 minutes. Go!

Game #59 – Blue Jackets vs. Hawks: Lineups & How Teams Were Built