Stuck In The Middle – Wild vs Hawks Preview, Tree Lighting

As the broadcast will assuredly punish the listening audience with 7 million reminders of by puck drop, the first game back at home after a road trip is always a TRAP GAME. And it’s even moreso of one by some moronic logic because the Wild have lost 6 of 7 coming into tonight. Or it could just be that they’re just perpetually mediocre.

The big news in light of the Wild’s most recent skid came yesterday, when Ryan Suter actually exhibited flickering embers of a personality when he expressed distaste for being partnered with Jonas Brodin once again. Not due to any disrespect for Brodin as a player, but Suter is just tired of playing his off side. In limited time together this year after playing together for much of the last two years, Suter and Brodin break about even in possession, though they take significantly more defensive zone starts when paired together. On top of a coach’s need to perpetually shake things up during a losing skid, Marco Scandella’s return to the lineup tonight likely also plays a big role in Suter not getting his way. Though Mike Yeo once again ripping his team new assholes at practice has likely gotten to be a bit old for this group as well.

As a team the Wild are in the bottom third of the league in shot attempts, carrying 48.1%, though they’re actually a hair better on the road at 48.7%. Part of that can be attributed to Zach Parise missing a month, though he’s been scoreless in two games over the weekend after missing nearly three weeks. And even then he was only dead even in possession, though the threat of him certainly draws the attention of the other team’s top pairing as a general rule. In Parise’s absence much of the offensive responsibilities fell to Mikko Koivu, who’s done about as much as can be asked of him with 20 points in 22 games to lead the team and driving over 56% of the shot attempts. And while Thomas Vanek seems mildly interested this year with 10 goals already and Jason Zucker is a speedy little pissant on the wing, the Wild forward corps just seems overly populated with the same types of guys they’ve now kept together for years and haven’t gotten out of the second round with. Of course that means Jason Pominville and Charlie Coyle are both going to go off with multi-point performances tonight.

Of course much of this could be mitigated if Devan Dubnyk didn’t go back to Devan Dubnyk right after getting paid. A .909 save percentage just isn’t going to cut it, especially when this exact same roster needed him to have a career couple of months last year just to grab a wild card spot. His .922 at evens isn’t egregious, but he’s really let them down on the PK, allowing 13 goals against and only sporting an .831 when down a man. Throwing an .895 on the road hasn’t helped matters either.

As for the Men of Four Feathers, has everyone heard that this is a TRAP GAME? Even though in the Quenneville era, the Hawks have taken 8 of 12 points in their first games back in December. And as everyone declared the second after Marian Gaborik’s goal crossed the line on Saturday night, taking 8 of 12 points is more than acceptable.

Being back at home will mask these continually confounding lineup choices by Quenneville, with Teuvo being punished by playing with MANSHITTER and whatever it is Tanner Kero continues to do. Jonathan Toews is still saddled with the mirror image bowling balls of Andrew Shaw and Ryan Garbutt, which continues to be a complete waste of everyone’s time, especially Toews’. The “third” line of Dano, Kruger, and Hossa has the potential to be interesting, but it won’t have the opportunity to be if Kruger gets his usual zone starts buried within the Earth’s mantle when at home.

On the blue line, no one will be happier to be back on West Madison than Trevor Van Riemsdyk, who had a rough go with unsheltered second pair minutes on the road, taking home a glistening 40.1 share. He’ll see a far more sheltered set of minutes here, though being able to unload $3.3 million dollar third pairing defenseman Trevor Daley and slotting TVR down would be the most ideal solution. Or at the very least shuffling the pairings to give the Daley and Rozsival baby sitter partners to where they could be trusted with anything other than offensive zone starts.

Corey Crawford gets the call in net as he likely should have in LA, and much like the rest of the team, his home/road splits take a significant leap at the UC, with a .924 save percentage at home (and a .900 on the road). It really is the damndest thing that a team with young forwards and defensive depth issues performs much better at home. It’s truly one of the sport’s great mysteries.

The Wild are currently in one of their traditional mid-season tail spins, and this time their previous messiah is one of the leading contributors to it. Their 28th ranked PK needs to pay for any indiscretions, and the second line should be able to get away from the Suter/Brodin pairing with last change. Doing both should help this team avoid the TRAP GAME fate.

If you’re heading to tonight’s game, pick up a copy of our gameday program sold outside the arena. If you’re not, you can get the digital copy right here. 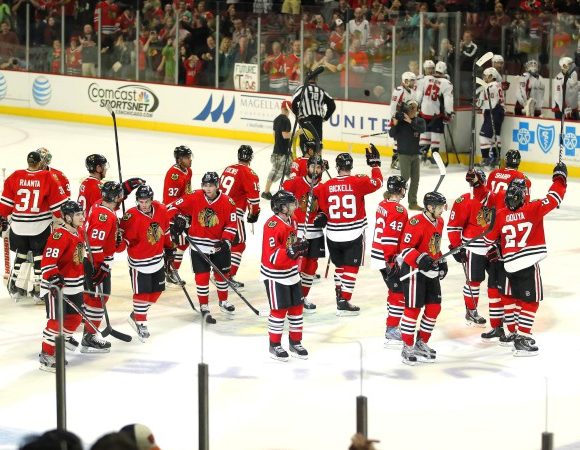