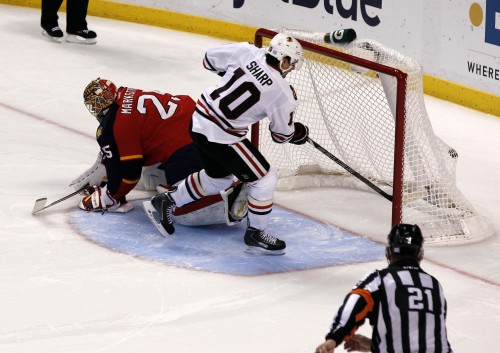 Looks like the South Florida sun got to them. Or maybe it was the moms preventing them from hitting South Beach. Whatever it was, it was kind of a sleepy effort from the Hawks, though they were in control for most of it. Once again, the Hawks moseyed out to a two-goal lead which put the game on the precipice. But once again, they didn’t quite push it over the edge, which allowed a bounce and/or a mistake to let the opposition tie the game. From there the Hawks coasted to a shootout, where Patrick Sharp discovered the Panthers didn’t have any video on his move in Carolina to end it.

Yet another October two points. Let’s move on.

-So the whole story is going to be YET ANOTHER 3RD PERIOD COLLAPSE from the Hawks. I’ll do a more in-depth post on this “phenomenon” tomorrow, but tonight was not the only occurrence of Keith and Seabrook being on the ice when things go a slight balls-up. First it was Seabrook not winning a board battle with Toews, Hossa, and Saad not exactly bursting a lung to get back. All three were “below” their man (not between them and the goal), which led to a nifty passing play from Hubedeau to Fleischmann. With the Panthers feeling the buzz, Keith made just an awful pass that matched his one to Toews for the opening Hawks goal, and Kulikov made no mistake. The Hawks will continue to blow leads when their #1 pairing is overdosing on cough syrup. But no one expects that to be a season-long trend. It’s October.

-That said, Keith and Seabrook were a combined +26 in CORSI, so they can’t have been doing everything wrong.

-The Hawks were outshot by the canyon-esque margin of 7-6 in the 3rd. So it’s not exactly like they’re falling into a shell and are just helpless in the final frame.

-Kane and Sharp a negative in Corsi. Why do you think that may be?

-The ice time distribution was better tonight, and probably would have been even more even if the Hawks could have held onto the lead. Smith and Pirri got over 10 minutes (Bollig only 7), Keith didn’t crack 24 even in an overtime game, and Hammer and Oduya almost matched him. That’s a trend we’d all like to see continue.

-Sharp and Kane combined for 5 shots. That’s just not enough.

-Hossa and Saad combined for +24 in Corsi. Spot the difference with Sharp and Kane. I think our point is made.

-If I were a Panthers fan, I’d wonder why Erik Gudbranson isn’t better than he is after this amount of time in the league.

-Sheldon Brookbank had another solid game, and maybe has earned the right not to be shuffled out on Thursday just because.

Generally how this goes is when you have a team that’s not playing that well but is gathering points, you have an argument whether the performances or the results are the real truth. Thinking the performances are the truth here would certainly be the minority opinion. The Hawks won’t play the East forever so they’ll have to tune it up sometime. But we’d all rather they save the best stuff for the winter and spring. Onwards.