A scatterbrained, slapped-together late season road trip has the Hawks now turning south from Manhattan to Texas tonight before turning back east for games against Carolina and Philly. And the Hawks find themselves thrust back into the conversation for the Central while the Stars are all but eliminated.

Entering tonight the Stars are eight points back of the last wild card spot currently held (bafflingly) by Calgary, with 11 games to play and four teams in between. It’s not IMPOSSIBLE per se, but they have a less than one percent chance of qualifying for the post season after Jim Nill won the 2015 Stanley Cup on July 1 of 2014. And while some moves have worked out better than others- Jason Spezza has been wholly adequate (if still overpaid in perpetuity) with 53 points while shockingly playing in all 71 games, Ales Hemsky has been an unmitigated disaster. Even giving him a soft landing on a team under Lindy Ruff where defensive structure is a mere rumor hasn’t suited Hemsky’s floating tendencies, and he has occasionally found himself a healthy scratch.

But when discussing Dallas forwards that’s burying the lede more than a little bit, as Tyler Seguin would assuredly be threatening for his first Art Ross Trophy (and one is coming) had he not missed ten games with a knee injury. Even still, his 63 points in 61 games have him fourth in the league at 1.03 points per game. Red assed running mate Jamie Benn picked up the slack in Seguin’s absence, and has 66 points of his own, making one of the most formidable duos in the league. And neither is surfing the percentages, as both predictably take on the toughest competition among Dallas forwards and still come out well ahead, controlling 53% of all shot attempts at evens.  As a group, the Stars throw more pucks 5 on 5 at opposing nets than even the Hawks (60.7 to 60.4 attempts per 60), and because they’re shooting middle of the pack, it’s led to a second-overall ranked offense at 3.2 goals a game.

Even the much maligned defensive corps hasn’t been as terrible in practice as the record would make it appear, though there is almost no interest whatsoever in shot suppression. Rookie John Klingberg and Trevor Daley have been exceedingly shotgunny, and will abandon their positions to join a rush at the mere hint of the puck leaving their defensive zone. To a certain extent it’s worked, with Klingberg having probably the quietest 36 point season (in 54 games) from a rookie defenseman in the post-lockout era, and Daley has an obscene 16 goals, up from his previous career high of 9. But Daley is out with a knee injury, so the Hawks will not see him this evening. Klingberg and Alex Goligoski tend to take on the top assignments for the Stars, but with Daley out the most consistent pair still together is Jordie Benn and Jason Demers, so they might draw the heavies tonight.

The problem for the Stars has been the goaltending, which team wide has been an abhorrent .894, in front of only Edmonton for worst in the league. Tonight’s starter Kari Lehtonen has fared the best among Dallas netminders with a .906 this year, tying a career worst dating back to the chuck and duck Marc Savard-Ilya Kovalchuk era Thrashers. And when a team is as disinterested in defense as the Stars have been, subpar goaltending will bring things to the predictable state they’re in right now. Lehtonen still has 2nd overall pick pedigree however, and manages to yank one acrobatic performance on home ice out of his ass annually against the Hawks.

As for our Men of Four Feathers, it appears that the forward lines are finally rounding into some kind of sense. With Kris Versteeg now out of Quenneville’s Gulag of Mistrust (trademark) and back on Brad Richards’ right, that gives the Hawks three legitimate scoring threat lines while Marcus Kruger still minds the defensive zone dungeon with Shaw and Nordstrom flanking him. There has been no word yet whether David Rundblad will get another look tonight off of a solid performance against the Rangers, but it’s always a possibility that Michal Rozsival’s corpse will be dragged about by Duncan Keith once again. Corey Crawford will somehow get the start tonight despite the fact that Scott Darling managed to steal his job on Wednesday.

With last change at home, Lindy Ruff will probably look to get Seguin and Benn out against Richards, as the Hawks have three legitimate two-way centers that can make life difficult. One would assume Ruff will be coaching as if his team has a chance until they officially don’t, but he’s also been known to just roll his lines, matchups be damned. Either way this is going to be a fast paced game, and the key will be for the Hawks to not be overly judicious when firing on Lehtonen. He’ll have to earn every bit of his .906 tonight against a team as equally offensively inclined as his own. For the Hawks, they cannot afford to leave two points on the table against a team out of the playoff picture with home ice still at stake. Let’s go Hawks.

What's This? An Actual Game Preview? You're Serious?: Hogs at Wolves 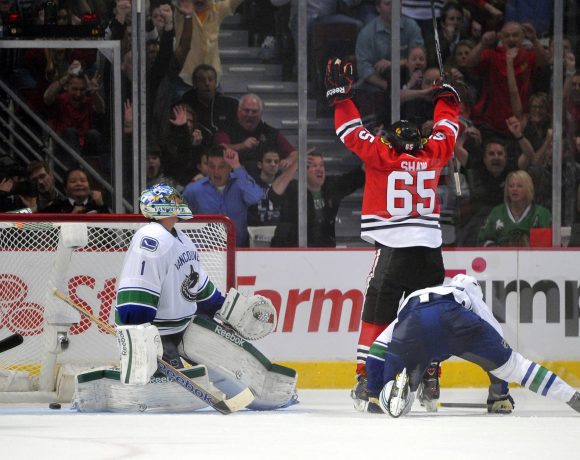