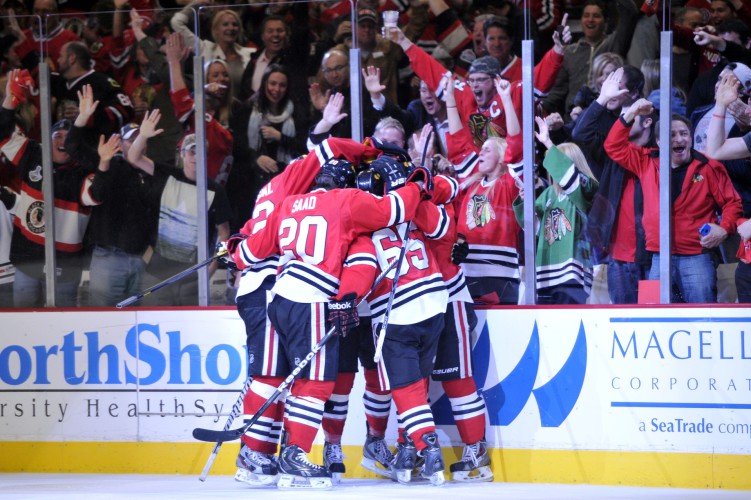 Not today. Or yesterday. Whatever.

I wasn’t sure what the invasion of Jesus freaks outside the UC meant for the Hawks before yesterday’s game. Was God coming to help? Was he coming to condemn? One thing is for sure, I and all my readers are going to hell. Dude on the megaphone told me so. So you’ve got that going for you. (Sidenote, I love when these nutjobs get one of their kids to preach on the megaphone. Like that kid’s belief system doesn’t have a great chance of altering forever the first time he sees a pair of boobs.)

Anyway, the Hawks finally found some power play goals (you can score two in a game?), and pretty effortlessly closed out a 3rd period lead to keep breathing in these playoffs. What’s funny is that aside from the power play, and the lineup shuffle, I don’t know that all that much changed in this series.

Let me try and clear that up some more. Once again, the Hawks dominated the first period, putting the screws to this Wings defense and to the tune of 14 shots. But this time they finally got a bounce, with a loose puck off a rebound finding Bryan Bickell to pot. It’s the kind of rebound the Hawks just haven’t been able to find. They also got Datsyuk to hit a post in the 2nd, though Cleary would go on to equalize anyway. Bounces changing?

But the game looked to me as all the others besides Game 2 have looked. The Hawks pressure the Wings blue line into mistakes, Howard stands tall, the Hawks can’t get to quite enough rebounds that are there, and Crawford is only required to make a couple big saves per period. I know some of you are tiring of CORSI numbers, but look at these fucking things. This is not the first time the Hawks have taken it to the Wings at even-strength, and I don’t think it’ll be the last.

-I was worried about the defensive shuffles, but in the end they weren’t all that radical as this is how the year started. So it wasn’t all that unfamiliar. And while Seabrook had a couple of egregious turnovers, as the game went on he did look more and more comfortable with Keith again.

-As for the forwards….whatever. I don’t like Handzus getting this much responsibility, still. Shaw, Stalberg, Saad was an interesting experiment but looks like it’s just a bit too frantic to not get exposed (aside from Shaw’s second goal). I actually thought Bolland and Fro would be a little more effective than they were based on their success together in the past. Quite frankly, when Babs gets to choose how he wants to handle this Monday night, I get very worried. Unless Q has something else up his sleeve, but generally when he does I only get more worried.

-You can tell the gap at even-strength when the Wings really up the post-whistle bullshit. It’s like they know they have to get the Hawks off their game or in the box because…well, they can’t keep up when the Hawks are rolling.

-The power play. I’m not sure I saw anything structurally different on the two that scored. They won the opening draw both times, which is a help. One Wings killer on the first (Miller?) broke his stick, which helps. But I think the difference was simple recovery. Once the Hawks got one shot through, they got the puck back and tried again. As it piled up, the Wings simply tired. Shaw especially was an unpleasant badger behind the net to get the puck back (are any badgers pleasant? Maybe Michael Finley?). Once the Wings killers had their legs sapped, it was a whole bunch easier to get in front. As for the second, and I may not be remembering this correctly, but it all stemmed from a neat keep-in from Hossa. Of course, shots like that from the Captain don’t need a whole lot of strategy, do they?

That doesn’t mean I expect an avalanche of power play goals now, but it was nice to know it can happen.

-Now that Toews is off the schneid, if this ends without Kane making another impact I expect a few eyes to be cast at him. There were a couple loose pucks and board scrums that Kane simply refused to get into, and no matter his size that just can’t happen. When he does get the puck the Wings are flying at him to give him no space. He’s going to have to figure out something. He can’t power through like Hossa, or Toews, or even Sharp at times can. Maybe some quick turns in the corner or a shift of direction, and play really low to squirt away from his checks?

-While Shaw will get the plaudits, I thought Bickell was the best Hawk last night.

-Howard was coming as far out of his net as I’ve seen him. I don’t know if this is a trouble sign like it is for Crow, but he was definitely caught out for Shaw’s second. That’s not something he’ll try with the “LIVE BOARDS AT THE JOE”, but with the loose pucks that are lying around and Howard that far out, I wonder……

I don’t think this is some seismic shift in the series. The Hawks still have it all to do. Nothing looked unfamiliar about that game last night. But I still firmly believe that the longer this goes, the bigger the sample size gets, the giant, gaping, oozing holes in this Wings blue line come into clearer and clearer view. I just can’t see how routinely rolling out Quincey, Coloaiacovo, and Smith (and Ericsson was awful last night) eventually doesn’t cost a team.

Tomorrow is going to be a long day. The feeling I get is that Game 6 is going to be an ass-clencher either way. 2-1 seems like the winning score, possibly in OT. But if it goes the Hawks way, I see them blowing the Wings out of the building in Game 7. That’s not a prediction, just a feeling for how this will go.