The NHL Needs To Decide What It Wants To Be 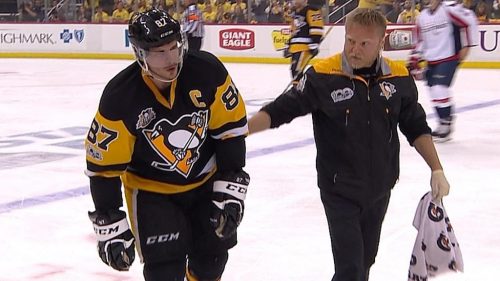 I suppose one of the main drawing points to another Penguins-Capitals series was that it was always likely to generate controversy, given how often these two teams have met, how hyped it’s been, and how the fanbases feel about each other. Make no mistake, a lot of the furor over Niskanen-Crosby: In Your House is one set of fans/media reacting to the other and then ratcheting up over reactions to that.

This isn’t just about this particular incident, and we’ll get to the others. As far as this one, I’m just not buying Eddie Plugs’s or any Caps fan/coach’s excuse on it, and it isn’t just about this one in particular. Yes, things happen fast on the ice. Why we love it. But the reason those dudes are out there and we’re sitting here is because they have the reaction time to deal with how fast things happen out there.

Sure, it happens too fast for Niskanen to plan it all and consider the consequences and the particular angle he’d like to take to Crosby’s face. But don’t tell me after watching him follow-through on it he didn’t see a window to Crosby’s head and take it. I just don’t buy anything else. And Niskanen’s previous behavior in this series does him no favors either.

Niskanen has been getting flattened by Crosby for the first two games. We’ve seen highlights of his attempts to “provoke” Crosby, including a vicious cross-check behind the net and nowhere near the play. So the idea that Niskanen hasn’t been looking to injure Crosby, in whatever sense and to whatever degree, just doesn’t hold up. Because what’s clear is he can’t deal with him on an even playing field. That much is also clear. In the context that he’s already taken his shots before and after the whistles in Games One And Two, we have to see this as another one.

As for those saying that no one would care about this if it wasn’t Crosby… say, doesn’t that league that every other league wants to be and more people watch than anything go out of its way to protect its most recognizable stars? That just me? Made it up maybe? And doesn’t the league the NHL competes most directly with give their most recognizable players room to show everyone what they can do every night? I must have hallucinated that one, too. The NBA must be able to overcome having its best players miss months and years through injury.

But this is something that at least hockey media is happy to glorify, and the NHL doesn’t seem to care too much how it’s product is being presented (which is why Mike Milbury should have been publicly catapulted into the East River after his Subban comments, but I doubt anyone at the NHL offices has the balls to even say anything). And it’s hardly just this incident. Remember these Kassian hits?

Both announcers had basically stripped naked and covered themselves in melted butter over them, completely ignoring the fact that he left his feet for both of them. It’s showing all of Ryan Kesler’s antics, or Subban’s slew-foot of Toews, or Kunitz acting like he’s a stalker from The Running Man, and dozens of other little incidents we could mention. And it all gets labeled as “REAL PLAYOFF HOCKEY!!!” Yeah, I mean ok. I guess. Except it’s kind of dogshit?

Now if the NHL wants its playoffs to have a more dystopian/After The Fall cage match feel, I’m here for that too. We’ll all watch, and love it. There’s a couple problems with that, however. One, most players will be injured and your Cup Final will be made up of two teams of Black Aces. Second, really won’t do a whole lot for that whole lawsuit the NHL is facing that could very well cost them billions. Third, no parent in their right mind would let their kids play hockey, giving it some of the same problems football is already starting to see. Oh, and no one else besides us lunatics/lost children would watch it either.

I don’t even have a huge problem with what goes on inside the glass. Fast game, emotions high, all that. But it’s your broadcast partners amplifying everything that’s wrong with said game. But then no one’s more conscious of protecting their favorite image of hockey than hockey broadcasters. But how does it help, really? The fans get riled up, so does the press, and somehow this filters down to the players. And don’t tell me it doesn’t, because look what Andrew Shaw became this year when he kept getting billed as “GRITHEARTFAAAAAARTTTT” and he’s hardly alone. The NHL seems to be so happy that anyone will televise their games they’ll take the short end of the stick in presentation/scheduling/commentators.

As for hits to the head, the NHL can’t really be half-in/half-assed about it anymore, and again it’s because of that lawsuit they couldn’t be handling worse and is going to cost them serious fucking cash in the not too distant future. It really shouldn’t matter what intent was. You hit a guy in the head, you’re gone from the game and suspended. Because hits to the head, or really anywhere near it, are simply attempts to injure.

Don’t give me your neanderthal bullshit. I love a physical game as much as anyone. Hits around the puck, in open ice, hook it to my fucking veins. But it’s clear what’s a right way to do it and what isn’t. And what Niskanen did isn’t in that category, because he was using his stick. But one from the blindside, or well after a play, or boardings, these aren’t hockey plays. They aren’t designed to separate the puck or force someone into a turnover. There simply attempts to injure. That can’t be abided.

I don’t know if Niskanen should be suspended, though we know now he won’t. I go back and forth on that. But we know that having him out there on Wednesday night could make that game utter mayhem. And more shit is going to go down, and there will be Pierre and Eddie (though they disagreed last night) lathering themselves in massage oil and talking about the greatest game on Earth while some dude is punching another.

Game #31 – Canadiens vs. Hawks: Lineups & How Teams Were Built

Cleaning Up After The Furor