Well, it took two days longer than it was supposed to and now was released on what is always a great place to release big news, a Friday afternoon. But the NHL schedule is out. Let’s see what’s up.

The first thing you’ll notice is that John McDonough finally got his way and now all home games start at 7pm Central (except for Sundays obviously, and whenever NBC comes calling). This has been something the Hawks have wanted for a while, and though it’s a bitch for those who work far away from the UC or those who like a lot of pregame time (or those who sell programs outside every game), it will be nice for everyone to get home before 11pm after most home games. No biggie there. Bulls games have always started then, so the Hawks probably should too

The banner gets raised on October 1st, a Tuesday against the Washington Capitals. Cue all the shots of Alex Ovechkin looking on and everyone over analyzing his facial expression during it.

-The Hawks once again pack the games into October, coming off a Cup win. They have 13 contests in that month, and eight of them are at home.

-The Hawks travel to Florida in October, which is a disappointment for those of us who wanted a break from the winter and were going to use games in Tampa and Sunrise as an excuse.

-The Circus Trip is now seven games instead of the usual six, and does not go to California. The Black Wednesday goofus-fest is in Calgary, and Black Friday sees the Hawks in Dallas before wrapping up the trip in Phoenix.

-The Hawks travel to Toronto and Montreal both on Saturday nights for CBC purposes.

-There is no Boxing Day game or New Year’s Eve game, but over the festive period the Hawks are visited by the Canucks, Devils, Avalanche, and Kings.

-The Bruins make their reappearance in Chicago on January 19th, which I’m guessing is going to be NBC’s first broadcast after the Winter Classic.

-The Hawks do not have a home game in February. They will do the California swing for the only time to start the month, go to Phoenix for the second time, and then wait around for the Olympics. They come back to New York to restart the season.

-The Hawks return to Chicago on March 1st, which we already knew, and it’s at Soldier Field. Though it’s scheduled as a night game, which is kind of an upset. Whatever, I’ll still be at the bar.

-March is obviously packed, with nine home games and 15 total, including a return to the scene of the crime in Boston and a stop at Consol Energy Center, where once again Toews and Crosby can not play each other due to injury for the second time in a month.

-The season wraps up with six games in 12 April dates, the last being the 12th in Nashville.

-For those curious, we’re coming up short on dates for a possible Committed Indian blog trip, but we’ll discuss it over the next little while and let you know what we come up with. 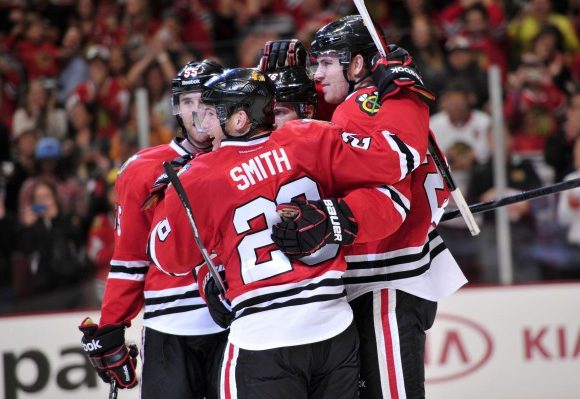