The Road Leads Where It's Led: Hawks at Jackets Preview/Pregame Thread/5-a-Side Session

It’s rare that three days off in a hockey season seems like we were all thrown into the hole, but that’s what this season has brought. After losing their first two games of the season, partly due to exhaustion, the Hawks embark on a pretty lax two-week trip that contains only four games. But if they’re not careful, the games themselves will be anything but lax.

You might think that starting the trip off in Columbus is exactly the get-me-over fastball you’d want to start any at-bat with. But the combination of how much trouble the Jackets have been for the Hawks in three games this year, along with them being the hottest team in the league, makes it anything but.

While I’d love to dig deep and find some underlying reason that only I can see for the Jackets surge here to prove just how smarter I am than you, it’s a very simple reason. Sergei Bobrovsky has golden boogers at the moment. He’s won five of his last six starts, and the one he didn’t he still took a point off Vancouver last out. In his last six starts, Bob has a .967 SV%.

It’s really no different than that week or two when Soriano binges and only hits doubles and homers and the Cubs aren’t awful because of it (sorry for the baseball metaphors. I’m in that mode, you’ll understand why fully in a couple days). It covers up everything else.

It’s not as if they’re scoring a lot, they haven’t punctured more than three goals in a game during this streak. Brandon Dubinsky is back in the lineup, as the Hawks haven’t seen a lot of him this year. Arty Anisimov will not be. No Wiz No Clue is still on the shelf, as are Derek Mackenzie (writing a sermon no one will hear), John Moore, and Derek Dorsett.

For the Hawks, there’s something of a new look tonight. Jimmy Hayes will reportedly skating on Dave Bolland’s wing opposite Patrick Kane. This is the most logical spot for him, which is why I can’t really believe it’s happening. It keeps the Hawks dynamo 1st and 3rd lines intact, and keeps their idiots reduced to fourth line duty. That is of course until Hayes can’t summon and seduce Helen of Troy by his fourth shift and gets demoted for Gorilla Salad.

Hayes is a better skater than he was last year, and though he’s been playing center mostly at Rockford, this should be an easy enough transition for him. Any player who can get in on the forecheck and create turnovers and then get to the net with Kane on the ice should, in theory, eat pretty well. It also allows Bolland to sneak into the spaces that Patrick Sharp would, as they both have a tendency to do that.

The Hawks have struggled with the Jackets’ effort and size this year. The Jackets probably should have won of the three, if not two. Sometimes it’s been fatigue, others a nonchalance. Neither will be an excuse tonight. The Jackets have the size at forward that can make life difficult for the Hawks, especially when accompanied by inspired effort levels. Seeing as how Columbus hasn’t beaten the Hawks in 10 tries, inspiration shouldn’t be an issue.

The Hawks will have to get back to some basics tonight. Defensive coverages the past two games has been….somewhere else. The penalty kill needs to get aggressive again, as other than Jack Johnson (maybe) there’s no point-men to be scared of here. But other than that, it should be right there.

The pitter-patter of little webbed feet is pretty loud behind the Hawks, even with that historic start. With the Ducks waiting at the end of this trip, it would behoove the Hawks to go rolling into that one, or they could find themselves looking up at a team in the standings for the first time all year. 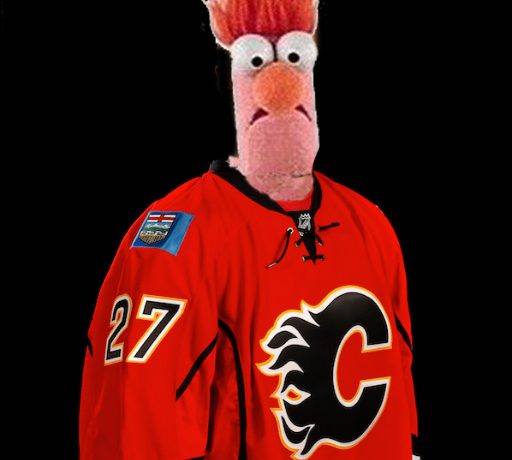 Flames Spotlight: Someone Teach Cal And Gary How To Dougie