Our boys have gathered to go over Week 3’s win and look ahead to Week 4’s divisional showdown with Minnehaha.

Comfortable win against a terrible team, but that’s what good teams do, right? Or is there more to this?

Brian Schmitz (@_BrianSchmitz): I hate to answer it this way, but I have no idea what we can take from the win at Washington. A win is a win is win, but let’s not re-ignite the Super Bowl talk just yet. The Vikings game, however hard it will be to watch, will give us a far better idea as to where this offense is at.

Wes French (@WFrenchman): Was it really that comfortable? Sure, it was a dominant half and final few minutes of the 4th, but without Case Keenum thinking he could goal line leap a first down this one was far more nervy than it needed to be.

Mitch was good but still inaccurate on throws that Nagy gifted him. He could have easily been perfect through the half and wasn’t, and the great TD pass to go up 28-0 is easily forgotten when you stand it up against the awful “fade” throw intercepted at the 1-yard-line. A touchdown there and you step on the throat, seal the game with 20+ minutes to play. Take out starters, run clock, all the fun victory stuff while ESPN fills air space.
We didn’t get that, and it’s concerning given the level of competition. I said it halfway through the 2nd quarters while Mitch was dinking and dunking his way to 14-0…a real NFL defense like Minnesota is going to be the real measuring stick.
Tony Martin (@MrMartinBruh): I also found myself sweating out the entire third quarter/second half until Keenum’s boneheaded play. I feel like Pagano took his foot off Washington’s throat and that, combined with some anemic play calling gave them a chance. My biggest issue so far with Matt Nagy’s offense is that his designed run plays lack the creativity of his designed passes; they’re either the zone read or something zany. They invested so much money in the interior of the line, why is it they can’t line up and run it up the middle with any success?
Wes: To the point about the running game, they also investing in the backfield – three new players in Patterson, Davis, Montgomery – and outside of a handful of plays there is no real plan. The diamond formation feels like it could become a real weapon, given that the four backs, those three and Cohen, could interchange roles out of that formation and give defensive fronts some real confusion to deal with. But the plays they call, when Patterson is in the backfield you know he’s getting the ball. Cohen is the guy getting carries between the tackles? Montgomery is doing it all, and Davis is basically a guaranteed pass blocker. Is that the best they can draw up?
Tony: All we can go by is what they’re showing us, so I’m gonna say yes, this is all Nagy has. I understand the ideological concept of using the screen game as an extension of the running game, but in all three games so far the Bears have had a very quick three-and-out in a key drive. Good teams don’t always run the ball super consistently, but they can when they need to, and a stronger devotion to the run game will give Mitch opportunities downfield.
Brian: That’s true, but what if you have an O-Line that can’t run block? The underlying issue with the teams offensive inconsistency is the five guys up front. Until this gets figured out, the run offense will continue struggle.
Wes: I think it’s a little lazy to just say the team can’t run block so why try? Mike Davis signed to rave reviews about how well he fit and that he would be a part of this offense and he’s got all of 28 snaps in three weeks.
I just feel like there is something there in that backfield to be unlocked, and if Nagy and his coaches can figure it out this offense climbs out of mediocrity and open things up for everyone.
Looking ahead to Sunday, what do you want to see on either side of the ball, and what do you think we’re going to see?
Brian: What I think we are going to see is a very boring, low scoring, close game. The Vikings are probably are probably the closest comp to the Bears that we will see this season; a team that will defend first, and hope their offense does just enough to win the game. It will be very interesting to see if the Bears can build on the offensive momentum they started against Washington.
Tags: Chicago Bears David Montgomery Matt Nagy Mitch Trubisky not that easy 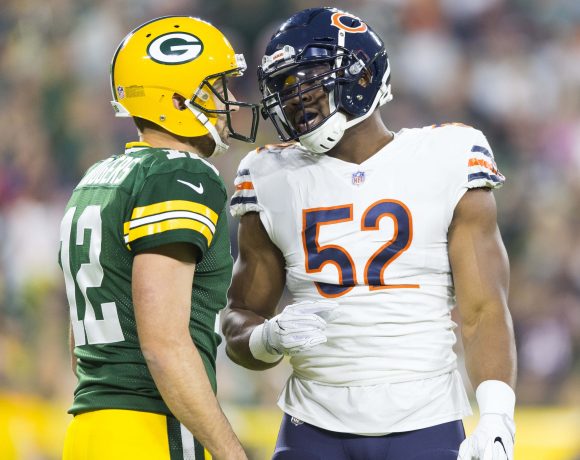 Khalil Mack Is The Bears “He Go We Go”