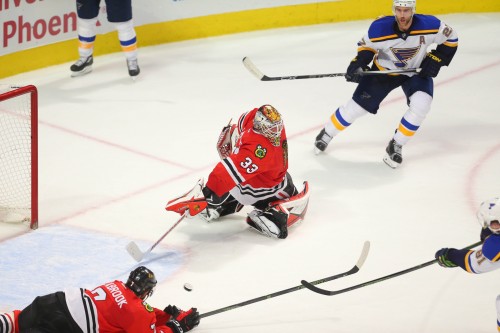 There are several ways you could look at this one. I’m not sure any of them matter. On the one hand, the Hawks kept one of the better Western Conference teams to barely a threat without their best d-man and three forwards. They had chances to make it a bigger lead. In another way, they only put up one goal, weren’t a constant threat, got pretty well stepped on in possession and coughed up a lead to lose for just the second time when leading after 40 minutes. You could say that the Blues haven’t beaten the Hawks without a gimmick this year. You could try and project what it means for next week. In the end it all seems a bit futile.

That’s the problem here. Third place was pretty much a foregone conclusion when the Hawks spent March screaming at their shoes. As for what a playoff series will look like between these two, you’re tempted to say that neither team wanted to show its hand tonight. But I’m not convinced the Blues have any other cards. As I said in the program tonight, I don’t think the Blues can do the things that give the Hawks so much trouble these days, at least not consistently. This was not a team looking to squeeze up the ice and pressure the Hawks in their own end. When their chances were over they retreated. They didn’t try and cut the Hawks off at the Chicago blue line or in the neutral zone. They gave the Hawks d-men who really struggle under pressure a lot of time.

In addition, the bluntness of the Blues attack was on full display. Everything gets cycled back to the point and it’s bombs away. Some nights, a few of those go in and everything is fine. Some nights it doesn’t. I lost count of how many times the Blues, with time on the boards in the Hawks zone, just ringed the puck around to the opposite point. It’s all they have, at least when Tarasenko isn’t on the ice. There’s no dynamic aspect to it, at least until it’s 3-on-3 and as we know that won’t matter next week. It really wasn’t all that hard for the Hawks to keep them at bay, and only a slight misstep from Hammer and a bad rebound from Darling kept it from being a shutout. It was also just about the only time Tarasenko got away from Hammer, who was flipped to the left side most of the night to deal with that exact threat. Whatever prime chances the Blues got came from scrambles and lost pucks, not creativity.

Meanwhile the Hawks were able to fashion a number of odd-man breaks and breakaways and just couldn’t make them count. I don’t think that would be a trend. This is why the Blues are probably the better matchup than the Stars, whatever Dallas’s goaltending may be.

-That said, that’s about as confident as Brian Elliott has ever looked. The Hawks seemed intent to try his glove hand, and he caught everything. He was assured and when the Hawks actually did bother to shoot on their odd-man rushes he was almost dismissive in his saves. That could be something we didn’t account for in a series, but he’s going to have to win a lot of 2-1 games you feel.

-Richard Panik has been an interesting study. You wonder where he fits when everyone’s healthy. I really wouldn’t blink if he replaced Desjarinds here or there in the playoffs. He’s got feet and at least half a brain, two things Man-Shitter doesn’t have and yet has played ahead of Panik for some reason. He’s not quite a diamond in the rough but he’s like the nice coffee table you found in the alley.

-Toews has certainly been noticeable with the additional speed on his wing, and had another four-shot game with a goal. However, he was spotted against the Tarasenko-Lehtera-Steen line and spent most of it in his own zone.

-Darling has been better than I thought he would be in an extended look, and we’ll give him a pass on the equalizer. Still, there were a couple scrambles in front of him that he was responsible for that could end up worse on another night.

-Fairly sure Panarin and Kane would ignore Gretzky or Lemieux at center with their passes at this point.

So, the Hawks know they’ll start on the road. They don’t know where. Which I guess makes them all like us in life. If it’s St. Louis, only then will we know what Hitchcock’s real plan is.

Wake Up Late And Honey Put On Your Clothes: Hawks at Jets Preview/Pregame Thread/Mimosa Brunch 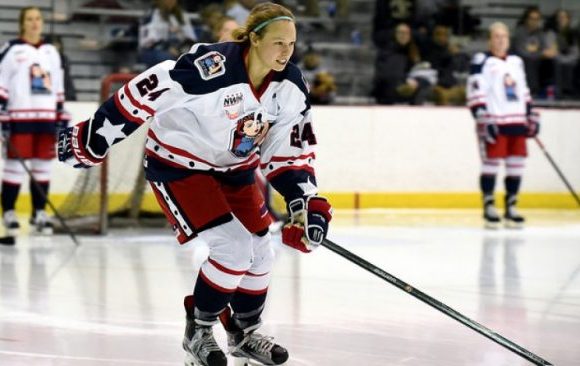