Three Things We Learned From Week 13 – The Worst Tree

It’s Clear That Bill Belichick Does Everything

People just have to stop hiring from the Belichick coaching tree, because it’s a great way to back up your franchise into a universal depression. Maybe Bill O’Brien is the exception (although the next time the Texans do anything meaningful please call me), but we’ve seen enough of Romeo Crennel, Josh McDaniels, Charlie Weis and Matt Patricia on their own to know that they clearly never did anything in New England. At least we got one in the division though.

The Lions were actually around the playoff picture, and sometimes in it, before Matt Patricia the obese rapist showed up. And even the most beef-stuffed Bears fan who thinks the forward pass should be outlawed can tell you that Mitch Trubisky sucks to high heaven against zone coverage. Fuck, it’s what Belichick figured out about Jared Goff in three minutes, another system-produced QB who had to be told exactly where to throw the ball. Any kind of disguise, and neither can figure out where the ball should go and goes into convulsions that end with the ball in the other team’s hands.

But if you simply keep playing man, then everything is exactly as it looks and Mitch can actually pick-and-stick throws. Which he did pretty much all of Thursday afternoon, and the Lions are now basically the only team that Mitch has authored genuine, NFL adult drives against. On a short week when everything is supposed to be ragged, and the Bears defense kind of was, the Lions made Mitch look real. That’s not easy to do.

It’s obvious that Belichick plans everything, does everything, and then lets his assistants wear a headset and talk even though they’re probably not hooked up to anything. They get to play NFL Coordinator. They’re Gary Coleman talking to the president from his desk in that Christmas episode of the Simpsons. When McDaniels takes over the Pats after Belichick has four simultaneous strokes, they will immediately go 2-45. And then every Pats fan will be screaming for Trot Nixon to take over as coach. Just watch.

The Lions Are A Thanksgiving Tradition We Can All Enjoy

I’ve seen a lot of suggestion that the Lions should be removed from Turkey Day, and NBC getting a night game now is something of an admission that Detroit and Dallas shouldn’t be the only hosts. But there’s something about the Lions on that special Thursday that I wouldn’t want to lose.

Maybe it’s because they’ve always played in a stadium that gave off the feeling of a garage or airplane hangar. There’s always been something underground about either the Silverdome or now Ford Field. Like they whole place has been sequestered from society. It’s not always like that. You can tell the Superdome is in the middle of New Orleans just by watching a game there. But not in Detroit. It’s quiet and dark and weird. It’s a tradition we can’t figure out how to get rid of, so here it is from some holding pen we built. It doesn’t even feel part of the same country. Or world. It’s almost a lab experiment on some oil rig/ship in international waters.

And think about that time of day on the holiday. The game starts before any cooking or really anything is going on, or just about. So it’s a nice gathering point. And then after about five minutes of watching these dopes, you have no problem getting the day’s festivities started because you realize you’re not missing anything. Unless it’s your team playing the Lions, and then it’s just a nice boost to the day.

I think I’d be lost without it.

Despite Their Best Efforts, The Bears Almost Always Will Talk You Into It

Deep down, you knew you’d be here. As bad as the Bears looked for most of this season, as infuriating as the losses have been, you could never fully convince yourself you wouldn’t care come December. It’s funny, because before last year started, most of us would have accepted the Bears merely playing meaningful games in December, no matter how they turned out. They just got it reversed.

Maybe it’s the full week in between, when you have time to talk yourself into anything, twist the evidence however you want, before the actual game makes whatever statement that you can then twist to fit your own narrative the six days following that. But here we are, and here I am saying, “Well you can’t trust the Cowboys on the road in December, and then Hicks will be back and even though he won’t be full-strength he certainly helps and they should have beaten the Packers last time, and maybe they’re finally distilling the offense down to what Mitch can do somewhat well and really they’d only have to miracle a win against the Chiefs at home before needing only to club Kirk Cousins again to make the playoffs and that’s easy enough….”

But hey, it’s better than just running out the clock. Have you seen the Hawks and Bulls lately? 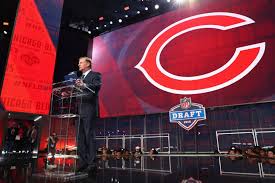