Matt Nagy Is The Weirdest Combination Possible – I’m not sure how a coach can both be as far up his own ass as Matt Nagy is that he probably came back around again and also coaching scared all the time. They don’t seem to go together at all, but Nagy has managed it. “Be You” means so many things now.

Let’s get to the top story right here. The end of the game, why are the only results in Matt Nagy’s head are a run for a loss, fumble, or incomplete pass? Why do you just assume that you can’t find one or two plays that you know you can hit to give you just five yards? There’s gotta be something you can just go to.

They’d actually run the ball. You can’t line up in the I-formation and get a few yards? And if you’re so convinced the Chargers are going to know you’re running, you really don’t have a play-action fake with that rollout and the tight end and receiver behind him that every team runs in the holster? That’s a play where even Mitch can probably figure out if I can’t complete this, I can just throw it into row three. Simple stuff, every team runs it, and those yards would have made a difference.

But that didn’t lose the game all by itself. Nagy actually adjusted and ran more conservative formations to run the ball kind of effectively. But then being up his own ass gets in the way. You get to the goal-to-go, and suddenly he has to be Matt Nagy again. Five receivers from the four. A screen to Cordarelle Patterson we all saw coming, including the Chargers. RPOs. Tough reads. Things the Bears haven’t shown they do well. He’s got to do it his way. The one touchdown they got is when they just lined it up and let Montgomery just run the fucking thing in there.

It’s Rex All Over Again – There comes a moment with every Bears quarterback who shows any promise or has any billing, where you realize it’s just not going to happen. It’s like my father said about horse racing, “There comes a moment in most races where you say to yourself, ‘I’m gonna lose here.'” A lot of people are long past that with Mitch Trubisky. I’m there now, mostly because I just didn’t want to keep doing this for my entire life.

Mitch has some obstacles. He only started one season in college. He came to the pros into a mess of a team, and basically everything he learned his rookie year had to be thrown out. His coach very well might be a madman who doesn’t know what he can and can’t do. He’s battled injuries. Fine.

But Mitch can’t make the throws. That Taylor Gabriel miss… you can’t miss that. That’s the game. Second tier QBs hit that. He’s not accurate enough to be the cowboy he wants to be. Not being able to move a safety with his eyes, that’s baseline skill stuff. If you don’t have it you don’t have it. You can scheme all you want, but if Mitch misses too many throws that are open, what does it matter?

The thing is if the season is truly lost, and I think it might be, the rest of it probably should be used to see if there’s anything to be salvaged with Mitch. There’s really no other option. Even if it’s just to pump up any value if you decide to swap him out. You know where the Chase Daniel road ends.

I Don’t Want To Hear The Defense Talk Anymore – Yeah yeah, 17 points surrendered is more than good enough to win. They got a couple short fields thanks to Mitch. Whatever.

One sack. One turnover. Up 16-7, and you let aged Marmalard march it down on the field on you. Melvin Gordon drags Eddie Jackson some five yards like a grocery bag. When the Bears have needed a big stop all season, they haven’t gotten it. When the defense could win the game, they didn’t. They let Joe Flacco march it up their ass. Derek Carr got to as well. Now Rivers. Aaron Rodgers is one thing. This is another.

At some point Chuck Pagano is going to have to figure out something else. I don’t know if becoming Blitz-burgh Reincarnated is the answer. But Khalil Mack isn’t getting home through either three blockers or quick passes. Leonard Floyd is at the Kerry Wood Memorial Zoo. Maybe we should see if Roquan or Trevathan can bring it a little more often. You need more turnovers. You need more sacks. The defense isn’t getting them. There’s too much talent on the field for this, even without Akiem Hicks.

Of course, the real question might be can Matt Nagy hold together a team when the defense mutinies. If he keeps coaching scared, I’m fairly sure I know what the answer is. 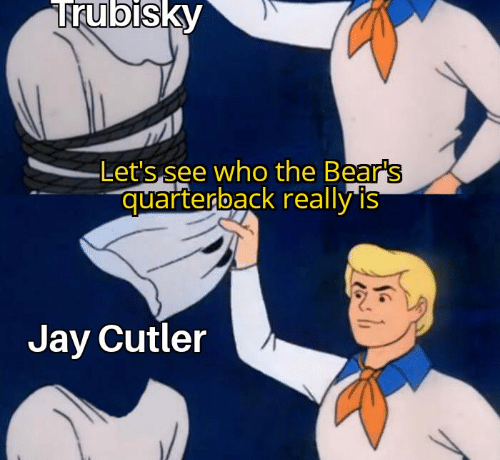