I couldn’t think of a theme for today’s post, so I’m just going to spray to all fields because I’m bored.

– Sadly, found myself watching the second game of the Subway SuperSeries last night between Team QMJHL and Russia. But I was rewarded when Phillip Danault had a much improved game. He was vaulted up to the team’s top line with Jonathan Huberdeau — who will probably be a Panther in about a month. So he wasn’t on straight defensive duty, and his puck-pursuit was on much more on display. He didn’t scratch a point but definitely opened up space for everyone else. Feel like we’ll get a much better read on him when and if he makes the World Juniors for Canada, though I don’t think he’ll be left out. Fournier was eh. Shalunov looked good again but not as good as Monday.

-Speaking of that game, it was held in Val d’Or. The arena held maybe 2000 people. And a quarter of is had to be skyboxes. Am I not supposed to find it weird that there are people who pay for skyboxes to watch children play hockey? I know it’s no more weird than that grotesque stadiums built simply for high school football in Texas, but Texas is fucking weird too. I know it’s cold and snows a lot and there probably ain’t much else to do, but is it such a forgone conclusion in the backwaters and podunks of Canada that it’s just accepted you can go watch children play hockey? I know, big city snob and all that. Yeah, I’m a big city snob.

-McClure made an excellent parallel today. We were talking about Charles Tillman, and he called him the Bears’ Patrick Sharp. An excellent player who seemingly keeps getting better but overshadowed by some generational talents like Urlacher, Briggs, and Peppers. But none of those three have bought an Indian outside the UC, have they? Anyway, keep an eye out for tomorrow’s Committed Idonije, I’m quite proud of the Peanut-themed Page 8.

-Don’t know what to make of these negotiations. If the leaks are true, is it a good thing they spent so much time on revenue sharing? The fact that they’re moving on to make-whole today, does that mean they came to an understanding on revenue sharing? I don’t know, I’m bracing for the worst this afternoon, and yet it doesn’t feel like that’s coming. You don’t need to check Twitter. If it goes badly you’ll find splashes of my blood outside your door. Perhaps I’ll leave it in two, perfect adjacent circles on your door like Michaelangelo would leave to tell you he’d been to see you.

-It’s Killion’s territory, but if you’re in your local packaged goods store and see Revolution’s Anti-Hero being sold, buy it and don’t look back.

-Someone unlocked all the metal and hard rock on the jukebox at my local. My life is slightly better now that I can once again drink and listen to Sabbath Bloody Sabbath somewhere other than my living room.

Game #28 – Hawks vs. Capitals: Douchebag Du Jour – There Can Be Only One 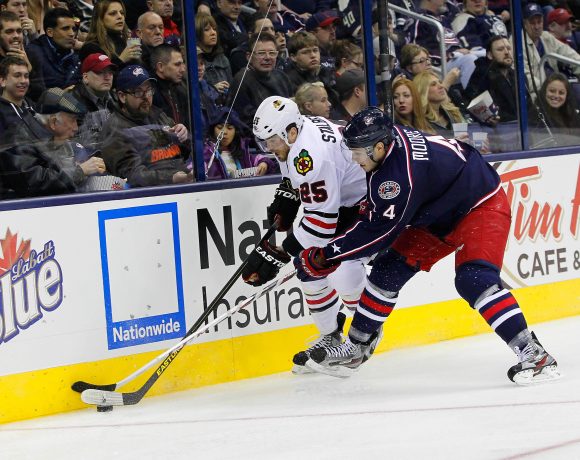