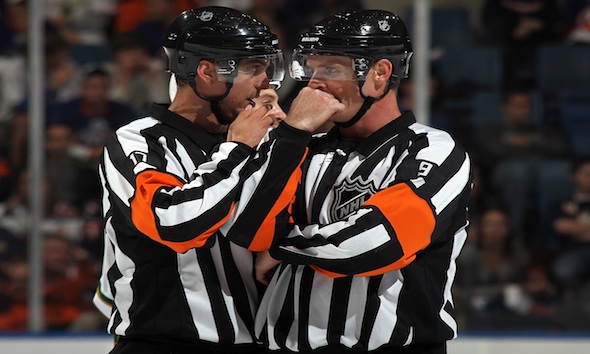 Depart a little from your questions to day and Hawks specific stuff, and go over some rules changes were going to see this season, and some of them might have more effect than you think.

The one I think might go a little under the radar here is that no longer will faceoffs move out of the offensive zone after a shot ends up in the crowd. Even if the shot is fired off the glass and into the crowd, or off the post, or even deflected by a teammate, the ensuing draw is going to stay in the attacking zone.

This will result in more offensive zone draws, which you’d think in theory would lead to more goals. I don’t know that it will. But I do think it’ll make some difference that a defensive team is basically not going to get a “free out” any more, and to exit their zone they’re going to have to get it out themselves. Watch this one closely.

Other rules changes: Instead of eliminating the trapezoid behind the net, which would have made the most sense for a league that claims to care about safety, they’re just going to expand it so goalies have a little more space to play the puck. This was a dumb rule to begin with, and only really succeeded in punishing teams that had the unique bonus of having a puck-playing goalie. Only in the NHL would a rule discourage talent, much like their removing of 4-on-4 play in the 80s because the Oilers were too good at it. Small step in the right direction I guess.

Those shenanigans at the faceoff after an icing are going away. No whoever you put in for the draw has to stay there, even if he causes an impediment. So you won’t see Milan Lucic or Marian Hossa doing the Dougie over the dot in order to stall for 10 seconds before Bergeron or Toews takes the draw. I think you’ll still see centers stalling and getting this “warning,” with coaches trusting them to not take a second and get a penalty. This one might be running in place.

No more Spin-o-rama in the shootout, even though the shootout remains. The hope is that there will be less of them as teams will switch ends for OT after the 3rd period and the ice will be scraped before OT instead of the shootout. While the hope is that this will result in more busted changes leading to scoring chances, I think you’re more likely to see just more conservative play from coaches in OT to prevent that. But I’ll remain open.

There’s some vague expansion of replay, which one would hope could include helping out with bogus goalie interference calls that chalk off goals and vice versa. But that’s not directly stated. We’ll just have to see.

There’s a couple others, but that’s the gist.

-HBO also officially pulled out of producing 24/7 today, because of course they did. The NHL still could produce their own or go through Showtime or something, but don’t hold your breath. And even if they did, it wouldn’t be half as interesting as what HBO could do. It’ll be heavily sanitized.

HBO was definitely not pleased that Randy Carlyle and Mike Babcock kicked cameras out of their dressing room last time around, the thinking being if you’re in this you’re in this. I’m just going to guess, or wildly speculate, that this caused a conversation between HBO and the NHL about editorial control and HBO probably didn’t like what they heard. HBO doesn’t need the NHL, and though I’m not sure the NHL “needs” HBO either, the scales would certainly tip in that direction.

I’d love to blame John McDonough for it, but we have no proof of that. Whatever goes on in my head though… that’s another story.

Tags: 24/7 Chicago Blackhawks HBO NHL not quite there but ok rules changes

Those Clowns In Washington Did It Again – Hawks at Capitals Preview, Subcommittee Hearing