You Used To Be Beautiful: Red Wings at Hawks Preview/Can Can

PIZZA!PIZZA!: Winging It In Motown

A rare Sunday late-afternoon start will see the Hawks and Wings wrap up their now miniature season-series, because their fans were tired of having to stay up past 11pm or something. It’s not what it was, but the limited engagements does make them feel special in a different way. Beauty is not in permanence, it would seem.

Today will see Christian Ehrhroff and Dale Weise make their United Center debuts as Hawks, and Corey Crawford returning to the net after Scott Darling had another oopsie on the road (“Oopsie On The Road” now being his official name).  Weise is still slotted to skate on the 4th line with Panik At The Disco and Dr. Rasmussen, and we’re sure there are a lot of writers waiting for Panik to score against Detroit for reasons I’ll let you put together yourself. Ehrhoff looks to remain making TVR actually look competent, though he did take some shifts with Hjalmarsson late against Boston. See if that doesn’t happen again or helping Seabrook waddle around the ice. Q is going to want to play with his toys while he figures out what goes where in April and May.

The Wings haven’t played since that loss on Wednesday night in the city where hope went to die. In that encounter, they tried out the now hardened Hawks’ lineup by trying to press the pace and keep things open. That normally would have worked most of the season, as the Hawks lack of depth in both forward and defense could see them ripped open when their stars weren’t on the ice. The Wings certainly come with the forward depth to test most everyone’s second and third pairings.

However, with Ehrhoff now in tow, and Teuvo and Fleischmann anchoring what has become a very effective third line, it didn’t work. Ehrhoff and Gustafsson were able to push the play through the space they were finding. Teuvo was everywhere, penalties were taken, power play goals poured in. That’s how the Hawks do it these days.

So I wouldn’t expect to see coach Jeff Blashill try it again and on the road. His defense simply can’t keep up with the Hawks, or really anyone with functioning lungs, and even Babcock throttled things back when facing Hawks teams of the past few years. It’s going to look more like the Bruins game than the first game against the Winged Wheel. I’m sure Blashill will call off the forechecking dogs, with only one down low and four others hanging out in front of the drug store known as the neutral zone. The Hawks struggled with that against the Bruins at times. They can’t physically knock around Gustafsson and Ehrhoff like the Bruins can, but they can make things a much between the lines.

Just like we saw Wednesday I would expect the Wings to attack TVR and Seabrook and Hammer to the outside as they have a wealth of forwards with plus speed. Nyquist, Tatar, Larking and Anathasiou especially can all scoot, and they’ll be concentrating on the right side of the Hawks all evening I’m sure.

Blashill wouldn’t name a starter but I have a hunch it’s Jimmy Howard. Petr Mrazek has had a bit of a hiccup of late, and wasn’t particularly good against the Hawks four days ago. Howard has been sparkling in his last two starts and usually plays pretty well against the Hawks. Mrazek may be fading under the workload and the Wings still have placings to contest for the rest of the season, so Howard very well could be the choice. As always with Howard, he’s a superb athlete but can lean on that too heavily at times and start to resemble something with gills out there.

It’s a pretty light schedule for the Hawks from here on out, at least in terms of  workload if not opponent. There’s only one back-to-back left and only one extended road trip. The Blues and Stars are nursing injury and structural problems. The time to pull away arrives today.

If you’re going to today’s game, pick up a copy of our gameday program outside the arena. If you’re not you can get the digital version right here.

Game #25 – Golden Knights vs. Hawks: Lineups & How Teams Were Built 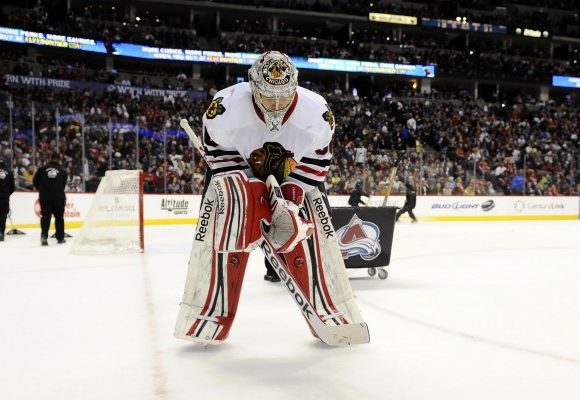