I Wanted To Live, So I Pretended To Die: Blues at Hawks Game 4 Preview/Taco Club

This all feels so familiar, mostly because the Hawks were here the last two playoff series they played. They lost a Game 3 at home to both the Ducks and Lightning, the former partially due to some baffling lineup decisions from their coach and the latter because they couldn’t find a way past a goalie who couldn’t move. That was a weird one. Anyway, how will they respond to this Game 3 loss, the first they’ve lost in regulation when leading after 40 minutes in more than two seasons?

There appears to be some buzz on lineup changes, and the one that’s getting talking is David Rundblad being inserted for Darko Svedberg. This is quite the shock, as a player the Hawks exiled to Switzerland has now somehow zoomed up the depth chart ahead of Erik Gustafsson and the now-clearly-deceased Christian Ehrhoff. What it is they think Rundblad can provide is something of a mystery. He is a good passer and has a big shot… when he has five minutes of time to get either of them off. The Blues will decidedly not be giving him that kind of time, and he’s going to need a babysitter to bail him out. The Hawks only have one of those, his name is Duncan Keith, and he’s going to have to bail out Michal Rozsival some too. Perhaps this doesn’t matter if Rundblad is only going to get the five minutes that Mehmet Svedberg got, but this is the one lineup change that looks likely. Andrew Desjardins could come back in for either Weise or Panik as well. Whichever, the Hawks are going to have to get a spark from their third line in some fashion.

As far as tactical changes, the goal for the Hawks, if they want to score more goals, is getting Brian Elliot moving side to side. He’s not the quickest, but that’s made up for by the Blues setting their stall out to prevent the exact type of passes and movement that would get Elliott having to cover more ground. They clog the middle so there are no passing lanes across, they don’t allow anything from behind the net to go anywhere other than to the corner, and they have kept the Hawks from hitting their line with speed consistently to open up more options as well. Perhaps Rundbland’s first-pass is a hope that they can do this more, but boy is that a desperation heave into the end zone.

For the Blues, they don’t have to change much. A lot of this result will be determined again by how much their top line gets over the Hawks’ top pairing. On Sunday, Tarasenko and Schwartz ran over Keith and Hjalmarsson to a frightening degree, and if that’s going to be a trend instead of an anomaly, then the Hawks are probably going to lose this series. Hitchcock wasn’t scared off by the Hawks 24-shot period on Sunday, though the score dictated that the Blues had to come after the Hawks. Now with something to protect, will the Blues keep attacking, keep sending two forwards in on the forecheck and have their d-men pressing up? Pietrangelo in particular has been very aggressive, perhaps in a bid to protect is quickly decomposing partner Jabe O’Meester from having to do anything at all.

You cam be sure that something that will be addressed in the visitors’ dressing room is to stay out of the box, because the past two games the Blues have had the upper hand at 5-on-5. Whether the Blues can go against their nature is a question we’ve asked a lot over the years and you know what the answer keeps coming back as.

This series is as close as it can possibly be, and you know that because of all the differing ways to look at it. On the one hand, the Hawks have one 5-on-5 goal in three games. On the other, they’re a bounce of TVR’s skate and a skipped puck of the bongwater UC ice from being up 2-1 or even 3-0 (they were the far better team in Game 1). Brian Elliott isn’t going to maintain a .968 SV% all series. In fact, a reason for optimism is that Elliott has done this before. He gave up three goals in the first three games to the Kings in 2013. He then gave up nine in the next three. He gave up five goals in four games when coming in relief against the Sharks in 2012. He was torched by the Kings in the next four games. He is reaching his limits. But the Hawks are going to have to improve to get him to malfunction.

If you’re going to tonight’s game, pick up a copy of our gameday program sold outside the United Center. If you’re not, you can get the digital version right here.

Game #72 – Canucks vs. Hawks: Lineups & How Teams Were Built 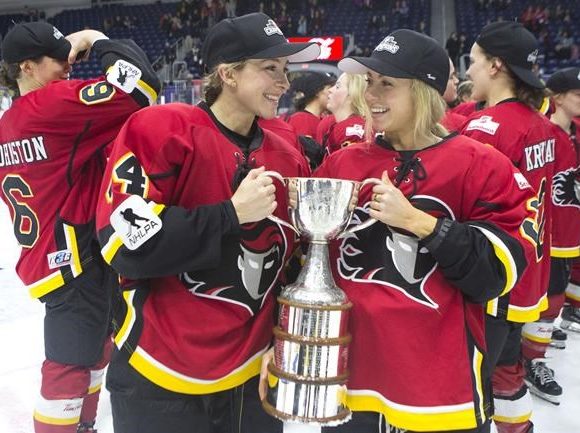 When It Comes To Women’s Hockey, The NHL Need To Do Better Or Worse Than A Token