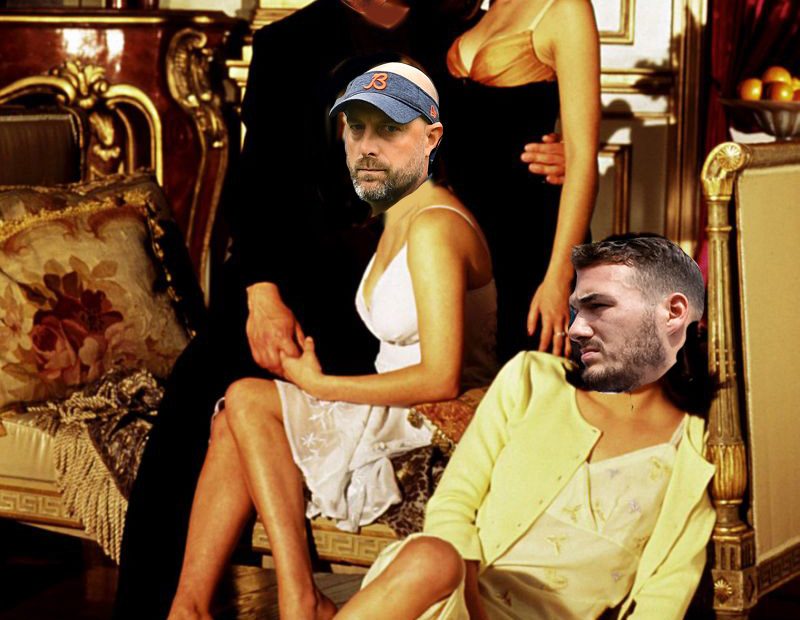 Tony Martin: Well Wes, I guess saying we would be at this point in the 2019 NFL season would’ve been pessimistic had we predicted it in August. The system is all busted up and now the 5-4 Rams welcome our shitty Bears to their house for an opportunity to show ass to a national audience once again.

In preparation for this nightmare, we’re both going to look at top tier QB regression nominees Jared Goff and Mitch Trubisky, and how they’ll fare against the opposing defenses.
Jared Goff, who my initial mischaracterization as Ryan Phillipe even though I meant Ryan Gosling caused the excellent photoshop that accompanies this article, is without a doubt hitting his Senior Slump. In spite of his excellent 2018 season, Goff is back to playing incredibly unevenly once again. He’s coming off back-to-back Pro Bowl season and looks simultaneously like a world-beater and an average bumslayer. He’s destroyed bottom-tier defenses like Atlanta and Cincinnati, but struggled against Tampa Bay (?) and San Francisco.
Combing through Goff’s game logs, there is ABSOLUTELY a correlation between how often Goff is sacked and how often he makes mistakes and turns the ball over. He has had nine passes intercepted and fumbled nine times in their nine games this season, but they come in bunches, and it’s all rooted in how much pressure the opposing defense puts on his pretty blonde shoulders.
How much of the Bears domination of Goff last year was scheme and game-planning, and how much of it was just a talent disparity between the Bears D and the shorthanded Rams (Cooper Kupp was out by week 14 last year). Watching highlights, it’s not that Goff was completely ineffective – he just had no time to pass on most of his snaps. Mack, Hicks, and Goldman were in the backfield on almost every snap. Incidentally, when the Bears couldn’t get pressure, Goff was successful in moving the ball down the field.
The 2019 Bears defense has struggled to get consistent pressure against quarterbacks, and closing running lanes despite a fairly good job shutting down cutbacks. Maybe they don’t allow lots of cutback runs because the initial hole is always big enough to get decent yards out of, but I don’t have the All-22 to confirm that. Do the Bears bring more heat this week against a QB who is not known for his mobility? I’m into it.
I would have to say the Rams biggest highlight from this season has to be their stunning reverse flea flicker against the Bengals earlier this season. A team with a pass rush doesn’t give Goff that kind of time, and he struggles as a result. If this team can do two things, Goff struggles and the Bears look like a real NFL team again:
1. Contain Todd Gurley
2. Apply consistent pressure to Jared Goff, even if it means committing extra defenders

Wes French :I’m taking partial credit for the photoshop in that I was the one that kept the Phillipe bit going and correlated it to Goff as a real world metaphor…but let’s move on.

Mitchell Trubisky isn’t even worthy of a Phillipe comp as his one uneven year led to the brutal 2019 through 10 weeks that we’ve seen, putting him on more of a “got a try out for Mickey Mouse Club, was an extra for three episodes, wound up doing B-movies and dabbling in Cinemax after dark features to pay rent” realm of actor.
Mitch was supposed to take a leap along with the Bears offense, the one that ranked 20th in yards/play last year and currently sits at 30th in 2019. All the leaps for the 2019 Bears have been backwards, sometimes literally as Mitch hops, skips and jumps to double digit yard losses on a lot of the sacks he takes (of which there are far too many).
Mitch only has three INTs on the year, but he did miss a few games and he’s still barely over 2:1 TD:INT ratio with eight touchdowns on the year. And three of those came last week against a beaten and brutal Lions pass defense that Mitch still only managed 173 passing yards. His 5.8 yards per attempt round out his 30th and over club for individual QB stats, a club that Mitch finds himself in too often this year.
There’s been a lot of optimistic talk about the 3rd-year QB and his offense building on that Lions effort, but a trip to the suddenly not so defensively stout Rams may not be the tonic Mitch needs. The plan should mirror last season when Mitch wasn’t very effective, but the running game was.
The Bears used a lot of slide help protection on the O-Line to mitigate the great equalizer that is Aaron Donald, and I’d look for them to double/triple team him on nearly every play he’s on the field. The rushing attack would also do well to scheme away from Donald, where using Tarik Cohen and his speed to run AWAY from Aaron Donald while simply allowing blockers to seal him off and keep him in pursuit is the winning formula.
Mitch will need to be something he hasn’t in 2019 – accurate and on point with decision making. The Rams can and will make his life hell with their rush, but if he can commit to a play and make the throw that’s there without hesitation the Bears will have a shot to move the ball and potentially steal one on the road. Moving the pocket a little more like last week against Detroit and getting Mitch on some bootlegs and misdirection PA plays, if they can get that ground game going early, could lead to the big plays the team and fans have been waiting for all year. We got a few glimpses last week, how about a whole decent offensive game?
1. Contain Donald
2. Run wild, protect the ball and stay the course with what worked in week 10
Tags: Aaron Donald Chicago Bears have some tripe Jared Goff Los Angeles Rams Mitch Trubisky Sean McVay Tarik Cohen 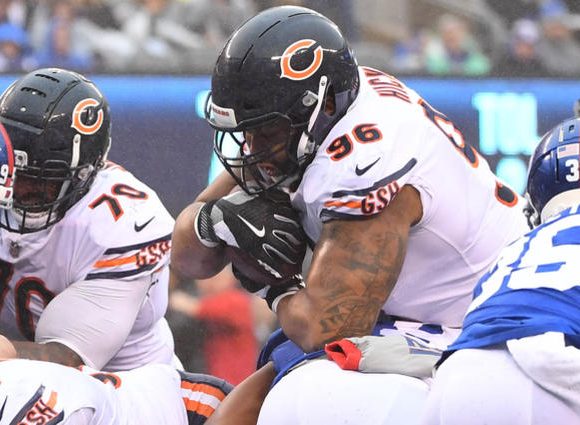