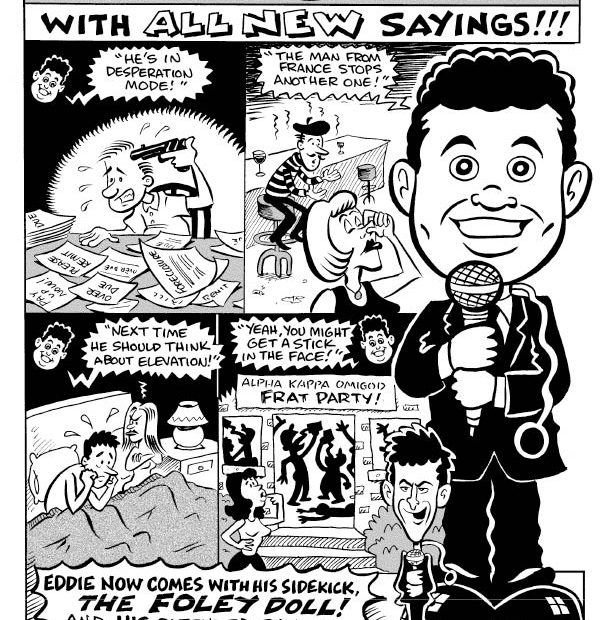 Today I’d like to move discussion off-ice, as we haven’t done that in a while. If you’ve read this blog for more than a day, you know that we like to have our fun and take our shots at the Hawks’ broadcast. At least the television side of it, as the radio broadcast really couldn’t be more top-notch. Though I haven’t sampled a large array of radio play-by-play men, I can’t imagine there could be anyone better than John Wiedeman. Troy Murray has become a very astute analyst after a rocky start to his broadcasting career, and host Judd Sirott is as passionate as they get (and if you can hear him talk off-air, you’d know exactly what I mean. I’m still scarred from a rant he went on in front of me when I was about 13 on Adam Creighton).

But the TV broadcast has entered the bewildering zone.

Full disclosure, I’ve been disenchanted with the TV presentation since Josh Mora was fired. You could not have a more informed and dedicated person than he doing it, and losing him was a blow. It’s not that Pat Boyle or any of the others are that bad (Rich King aside), but they’re not Josh. Steve Konroyd is fine, maybe even a little better, as a studio analyst but always seems to have his hands tied by the host.

We’ve made numerous jokes about the pregame and intermission segments from the UC and the goofs who stand behind it. We’ve complained long and hard about the jocularity that overflows between Pat Foley and Eddie Olcyzk. It’s gotten to the point where my colleague McClure has to watch every game on mute. At first I thought that was overboard. Now I totally get it. And what’s most distressing is that Olczyk’s analysis now how has some personal agenda that would question in professionalism.

I was at the game last night, but I could judge from the Twitter feed what I was missing. Once again, on a play where Duncan Keith and Brent Seabrook were mostly at fault, Eddie decided to not even mention them to apportion blame for the Oilers first goal. Instead he aired out Antti Raanta, who could have played it better. But he would have been helped by Keith not turning into an Easter Island statue and Seabrook putting down his cheddar-covered popcorn long enough to get over to Hemsky.

This has been a season-long trend, and more so than at any time in Eddie’s stint here as color analyst. Nothing is Brent Seabrook’s fault. Ever. Nothing must ever distract from Keith’s Norris campaign in which Olczyk seems to be the manager of. Nothing is ever Brandon Bollig’s fault, or rarely. And any spasm of competence from B-52 is treated as the second coming of Rick Tocchet. We could go on.

This is not a new trend, exactly. Just far more pronounced than it’s ever been. You’ll recall when Marcus Kruger finished out 2011 with the Hawks, and Eddie bent over backwards to absolve him of any mistake that he made as he struggled to come to grips with the NHL game (which he did). I personally had my stomach turn when all Eddie and Pat could do in Brian Campbell’s first game against the Hawks was make one joke about his lack of physicality and at no point mention he was a vital cog in the first Hawks team to win a Cup in 49 years. Seems like it was worth a mention. This followed Eddie’s championing of Campbell’s trade on The Score because “he was no more than a #5 d-man here,” even though Campbell was far and away the Hawks’ best d-man and leader in the ’10-’11 season. Of course, this didn’t stop Eddie from saying Nick Leddy’s effectiveness last year was due to being slotted properly on the third pairing, in direct contrast to his Campbell statements.

I won’t even get into the constant use of catch-phrases that don’t always fit and the terrible and overplayed jokes. But they certainly do not help a broadcast.

When you’re listening to all of this, it’s hard to conclude that there isn’t some agenda coming from Eddie or the Hawks’ brass. Some have suggested that McDonough has a company message that Pat and Eddie have to carry out. It’s not a hard leap to make when you hear all this. Though I tend to not believe that (or would just prefer not to), I can’t disprove it or call anyone who thinks it wrong. Because it does have that feel sometimes, doesn’t it?

Maybe the Hawks grew a taste for the ancillary trophies last year that came with the one that matters – the Selke and the Jennings and the others. Maybe they really want another Norris and Selke around. Though it would seem to me that if we’re awards hunting, Eddie could do a little research and see that Kane’s Hart candidacy is actually buffeted by the underlying numbers that show just what he’s been up against. You never hear that.

As Fifth Feather pointed out, if Eddie took time out from wiping his chin after bouts with Keith’s and Seabrook’s nether regions, he would see what we all see that at least defensively Niklas Hjalmarsson has been the equal of Keith. In fact, he may even be better because it is he and Oduya who continually draw the top assignments. But you rarely if ever hear that on the broadcast, as that might distract from Keith’s election.

Could it just be personal? My brother has always posited a theory that Eddie is trying to position himself as the next coach of the Hawks. Now, I don’t think this would ever happen without Stan Bowman being beaten about the head with a tire iron. But a front office position? Assistant GM? Maybe that’s not so ridiculous, and Olczyk doesn’t want to poison the office for himself by criticizing members of the “core.” Again, it sounds silly at first but when you think about it?

Admittedly, this is only a complaint for the hardcore fan, which if you’re reading this blog you probably are. Most Hawks fans won’t have noticed these things as irregular, or that Brent Seabrook has at times utterly sucked this year or Bollig struggles to get into position to physically forecheck or whatever else. And that’s why Eddie will never come close to facing real scrutiny. It’s just another thing that sucks for those of us who are really passionate and knowledgeable fans. Maybe McClure is really on to something…