When The Music's Over 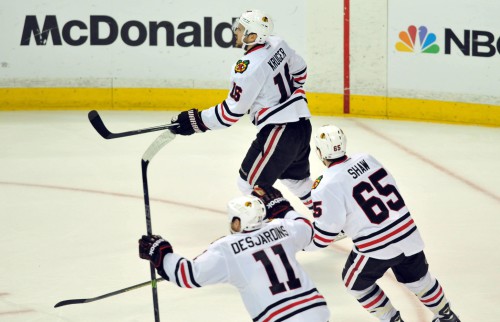 Now that we’re all trying to settle the nerves, and pumping in the caffeine to try and get through our various days, would be a good time to clean up what we didn’t have time or the energy to get through in the wee hours. First, all the stat stuff:

-As I tweeted last night, Marcus Kruger saw most of his time against Ryan Getzlaf, playing 14 minutes against him. So you’d have to believe this was a matchup Boudreau wanted.  And they were even in attempts, which you wouldn’t expect to happen when one team’s 4th line is going against the other’s top. This is what makes the Hawks so unique, is that they have Marcus Kruger hiding there on the 4th line, and he just might be one of the league’s premier checking centers. The Ducks got the best of this matchup in Game 1 but a draw is pretty much a win for the Hawks in Game 2.

-Speaking of Getzlaf, he logged 38 minutes last night, and yet no one seems to think he’s going to tire and fade like apparently every Hawks d-man is. No forward played more, and no Hawk forward came all that close. See how he looks tomorrow night, because with d-men you can be efficient with your skating. As a forward, that’s harder to pull off.

-Was doing some prying into Duncan Keith’s ice time. So far this spring he has played 384 minutes in 12 games. Last year he played 528 in 19. And he certainly had some overtimes to deal with then, with four games going to OT against the Blues and two in LA. The Hawks have played about 844 minutes of hockey in these playoffs, and Keith’s 384 is about 45% of that. Over a 60 minute game, that’s 27 minutes per game. Hardly scandalous. The other three of the top four are averaging more in comparison to what they normally play, but again not a ridiculous jump. If the sheer amount of minutes is the concern, I guess I get that. But in relation to the amount the Hawks have played, it shouldn’t be.

-The third line had their best game in a couple, and when trying to gauge whom Q might run them out there against at home, the answer is basically anybody. Vermette saw just as much time against Kesler as anyone, and completely clocked him in possession, 27 for and 15 against. I think that’s where Q will go, with Toews either going up against Getzlaf or against their third line which the Hawks have had trouble containing and Kruger taking whichever Toews doesn’t.

-Once again, after watching the highlights and after Feather pointed this out last night, Seabrook whacked that puck at ankle height on net. After 116 minutes of hockey. While under pressure. That’s a pretty gross example of hand-eye coordination.

-Bryan Bickell looks hurt. I know he always looks slow but he looks slower than normal, and no one seems to even mention that he missed part of Game 1 and part of a game against Minnesota. He’s not effective along the wall right now, which is part of the reason that 2nd line is having issues either staying in the offensive zone or getting out of their own. If this is how he’s going to be, then maybe switching him and Saad makes sense because Toews and Hossa can carry him where Richards and Kane cannot. 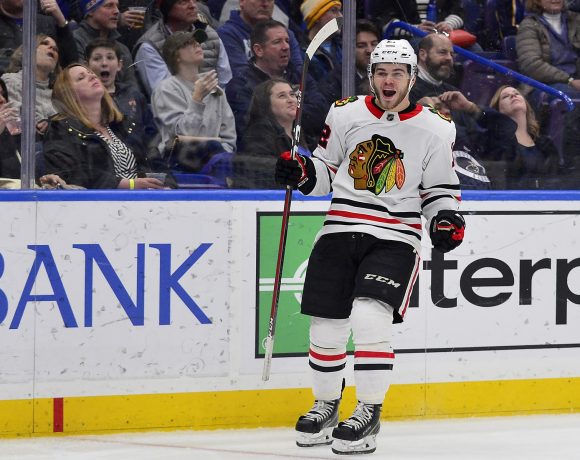