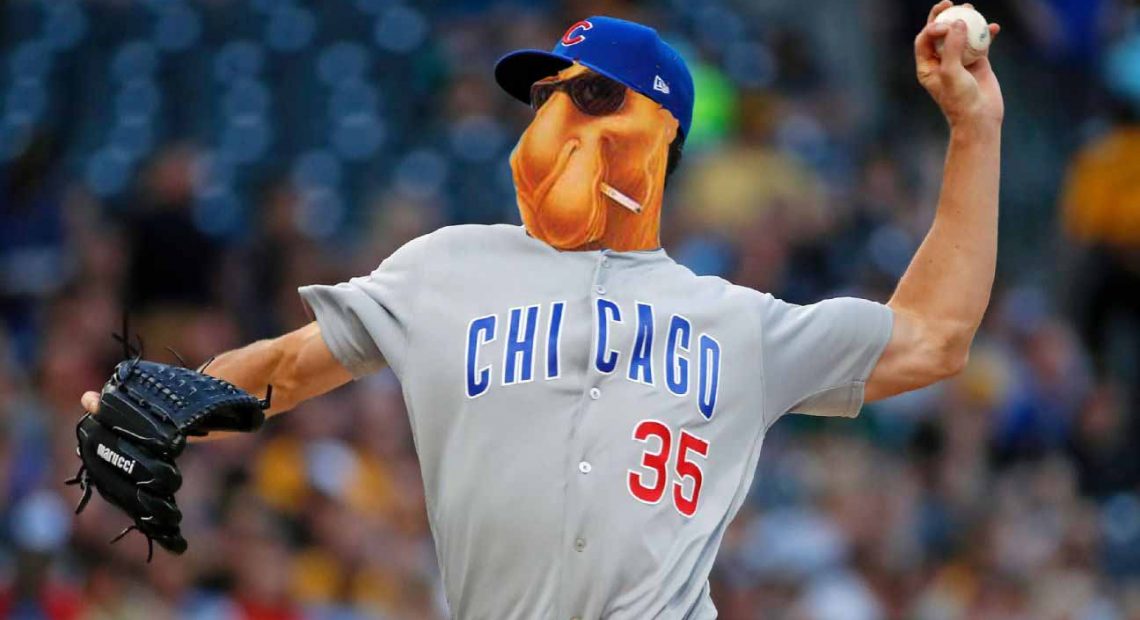 When the PECOTA projections and others came out before the season and sent greater Cubdom into a Burning Man-like fit, a lot of what those systems saw was questions about the Cubs’ rotation. Well, not questions exactly, because computers don’t have questions they generate answers and this could turn into a philosophical debate that goes on forever about man and machine and that’s not really what we do here. ANYWHO, the Cubs starting rotation is definitely on the old side, definitely contains pitchers (other than Hendricks) who have had dips the past two years and who had peripherals that were a touch worrying.

These questions were basically not considered the first six weeks of the season, or the six weeks after the first one, where the Cubs rotation was probably the best in baseball and took the Cubs from 2-7 to multiple games up in the division. But now the Cubs have had a rough two weeks or so, a .500 road trip and a sub-.500 homestand before losing yesterday to the Astros (which tends to happen). There’s been an iffy couple trips through the rotation, which starts setting off alarm bells and if it doesn’t stop pretty soon will have bonfires and effigies and weird clothing in a desert somewhere (I’ve never been to Burning Man and don’t intend to, so I’m just going to have this very limited and comedic view of it).

Perhaps the most worrying part of the starting staff’s struggles of late is Cole Hamels. His past three starts have basically seen his nuts get kicked up into his throat. He’s only managed 13 innings, and in them he’s given up eight extra-base hits, 11 earned runs, nine walks against just 11 strikeouts, and 23 hits overall. That’s a 2.46 WHIP and a 7.61 ERA. So yeah, that’s not good. On the plus side, he remains extremely handsome.

So what’s been the issue? Clearly the control is something to be looked at, as Hamels had only walked 17 hitters in the previous 49 innings this season But we can go a little deeper.

On the plus side, Hamels hasn’t lost any velocity. His fastball has actually been at a higher MPH the past three starts than it was before, up over a 92.5 MPH average where it has been 91.2 in the three starts before. Hamels hasn’t seen any change in movement either, as no pitch has lost its drop or horizontal movement. His curve flattened out a little in his start against the Nats, but that was a one-off and has been where it has been all of the season for the most part.

There hasn’t been much of a change in usage, either. His last good start, against Milwaukee, he threw his fastball basically 70% of the time, but that was also an outlier and he’s been where he’s been all season, throwing it about just half the time. 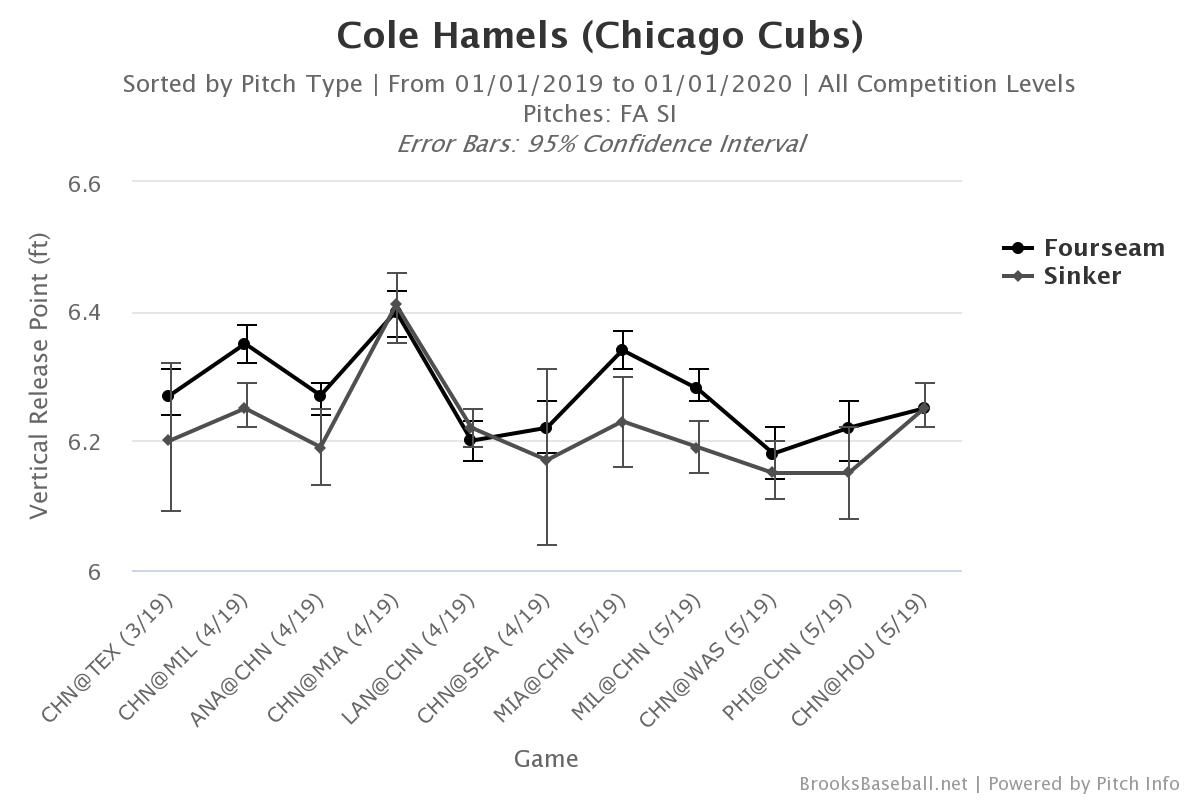 Something of a dip, and his curve has seen the same though it was back to normal in Houston yesterday, it just didn’t get him saved from getting shelled.

Where does that result? Well, accuracy. Here’s where Hamels’s fastball was in his first eight starts of the season: 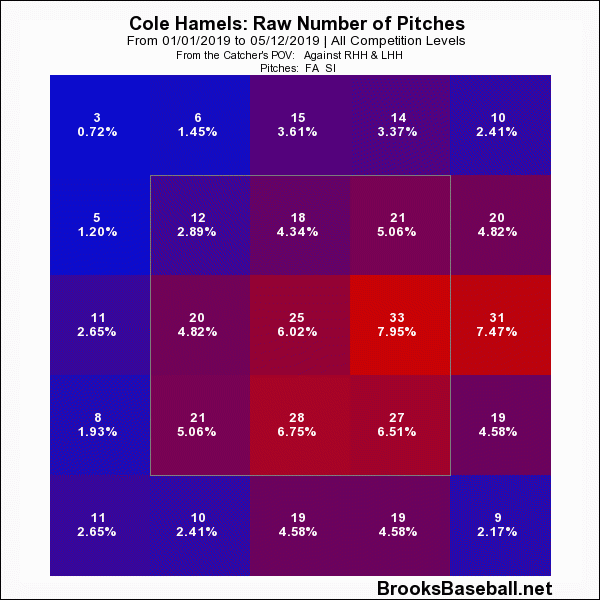 Pretty much in the strikezone, and when missing it was outside which is away from power for most righties. Basically zoning in on the outside corner, and when he did come inside it was low. Now the last three starts: 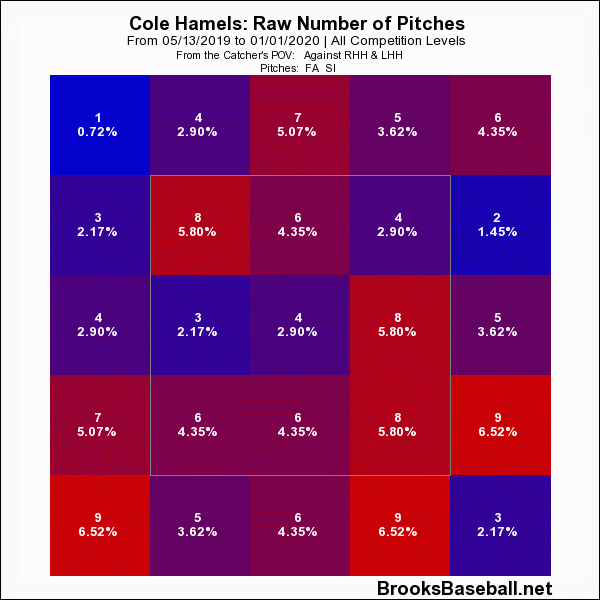 Whoops. All over the place, inside more than he’s been, not in the zone, and not surprisingly it’s inside and high in the zone where he’s getting mushed but good lately. It would seem the lower arm angle has cost him control and has led to pitches carrying inside and high to righties more often.

Once Hamels gets back to zeroing in on the outside corner again, or his arm-side corner, things should be fine. Let’s just hope he gets back there sooner than later. 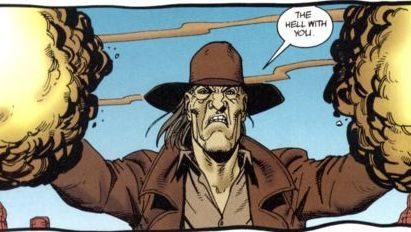