You Share The Same Fate As The People You Hate – ’18-’19 Team Previews: Blasty’s Boys 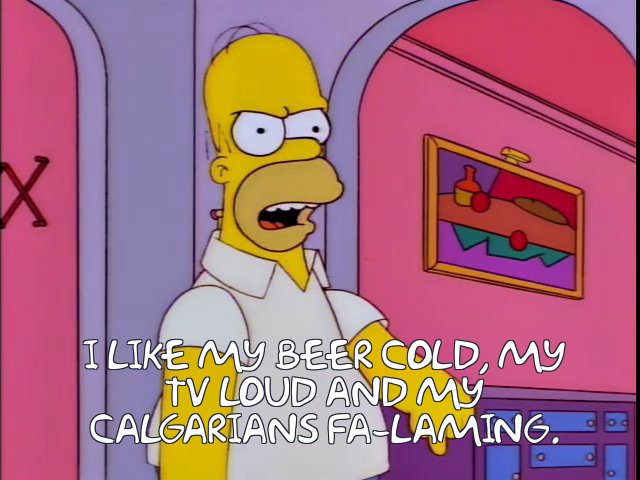 Everything went just about pear-shaped as it could for the Calgary Flames last year. Coming off a playoff berth and having two supreme lines and maybe the best blue line in the conference, the Flames watched Mike Smith be hurt and bad, every other goalie be terrible, every d-man who wasn’t playing with Dougie Hamilton or Mark Giordano turn into baby food, and simply had no scoring beyond their top six.

So they decided to rectify that by trading away Dougie Hamilton, adding a forward the forward-starved Canes didn’t want while at the same time hiring their coach who couldn’t find the playoffs with a GPS and a sherpa, and doubling-down on Mike Smith with a coach famous for a system that makes it impossible on a goalie. It’s…a choice.

Goalies: Do you think going back to a starting goalie who is 35 and hasn’t been anything above league average in seven years is a good idea? No, you don’t, because you didn’t put paint chips in your coffee this morning. Well, that puts you ahead of the Flames, though paint chips in coffee is an Alberta tradition BECAUSE IT’S RUGGED AND GRINDY AND GRAB YOURSELF AND SNORT.

It’s not that Mike Smith was a disaster. His .916 overall and .923 at evens are almost exactly on the average line. It’s just nothing more than that, and he’s unlikely to improve on that at his age and with a defense shorn of Dougie Hamilton, however good Noah Hanafin might be. More worryingly for the Flames is that Smith was absolute toast in February and March last year, when he was healthy which wasn’t a lot, which is when they would have liked to be moving for a playoff spot and instead got the ol’ mud in the tires. Smith went .883 in 13 starts after Feb. 1st, which is definitely getting put in the bin marked, “Used Diapers.” And he’s also not going to get more durable now that he’s closer to 40 than 30.

Backing him up is David Rittich, which is not the name of an antagonist in an action movie who used to be a green beret but has now gone rogue even though it definitely should be. He was bad last year, but has one decent season in the AHL before that. Let’s just say the Flames have way too many eggs in the very achy-breaky Mike Smith basket.

Defense: It was a weird season for the Flames’ blue line. Before the season, most in the know thought that T.J. Brodie was a down-ballot Norris candidate every season. Then he spent last season following Travis Hamonic around with a bag or two, and that illusion has been scrapped.

If Dougie and Giordano weren’t on the ice, the Flames got slaughtered. Hamonic was a complete disaster, for reasons no one has really been able to identify. And now Dougie is gone, which means Brodie gets to go back playing with Giordano which apparently masked all of his problems, and the rest can figure it out. But if neither Hamilton nor Brodie could make Hamonic anything other than a toxic waste site, what chance does Hanafin have? Hanfin comes from getting some hammock-y (get it?) shifts in Carolina as Brett Pesce and Jaccob Slavin did the heavy lifting there. He’ll get the same treatment at The Saddledome, but it’s a major step down from Justin Faulk to Hamonic.

Rounding out the third-pairing is Michael Stone and Brett Kulak. They keep telling me Stone is good for something. I keep waiting. We both keep not getting what we want. The cosmic ballet goes on. There are two kids who could make a splash in Oliver Kylington and Rasmus Andersson. They had better hope so. If one or both do then the Flames could have a real mighty look on the blue line. If they don’t it’s the top pairing and duck.

Forwards: The Flames picked up Elias Lindholm in a bid to have anything beyond their top six. Now if you’ll excuse me for a second…

WHO WANTS TO WALK WITH ELIAS?!!!

Thank you. Lindholm is a pretty nifty little player, as long as you don’t ask him to do too much. Slotting in behind Sean Monahan and Mikael Backlund seems just about perfect for him. He put up 45 points in Raleigh last year over-slotted on their top six. He might not have the talent around him with Derek Ryan and and whoever else, but it might work as well.

And it might be Michael Frolik, as the Flames just might break up the 3M line, at least to start. That line was simply a silly-successful unit, as it took the dungeon shifts in both zone and competition and crushed whatever was out against them. The Flames signed James Neal to play with Johnny Gaudreau and Monahan, and even though I think Neal is massively overrated and an ass-rash he’d have to go out of his way to not score with those two. Michael Ferland managed it and he’s basically a thumb.

Austin Czarnik seems to be a player who could carve out a role after being a point-per-game in the AHL for a few years in the Bruins’ system. But he’s a high-motor, try hard guy and the Flames need less of those. Sam Bennett and Mark Jankowski seemed destined to anchor the fourth line.

Outlook: The Flames are lucky that they’re in such a crap division. If Hamonic isn’t doing performative dance to represent Three Mile Island again, and one of those young kids pop, they have the best blue line in the division, non-Sharks category. If Lindholm can provide a little more spark on the bottom six and not make the Flames so top-heavy, they have more depth than most.

We’ve always liked Bill Peters around these parts, and secretly suspect he’s who Stan Bowman wanted to coach the Hawks a while ago if possible. His struggles in Carolina were pinned on goaltending. But after a few years it started to look like he wasn’t helping his goalies out much with his d-men shotgunning all over the ice and a talent-short crop of forwards.

Well, Mike Smith isn’t going to bail him out. He’s got more talent at forward than he ever had with the Canes here, but the defense is no better, and probably worse, than the one he had in Raleigh. If his possession-heavy ways can result in more goals with the Flames than it did with the Canes, who had a massive finish-deficiency, they can eye a wild card spot. If it doesn’t, they’ll be in the abyss again. 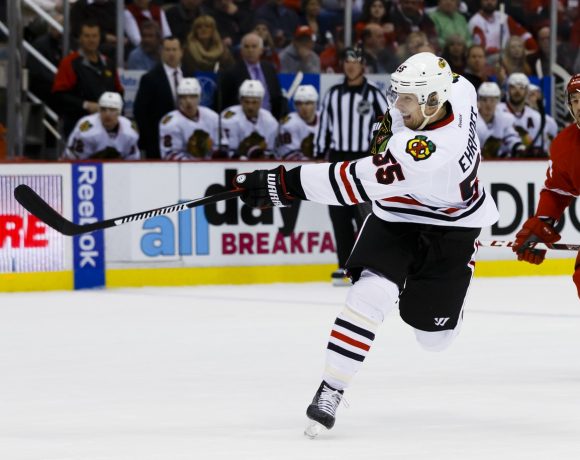