You Share The Same Fate As The People You Hate – ’18-’19 Team Previews: Columbus Blue Jackets

It remains a mystery what purpose exactly the Columbus Blue Jackets serve in the league, though now their ineptitude proved to be a catalyst in propelling the perennially underachieving Washington Capitals to their first ever Stanley Cup victory after going up two games to none in Washington and proceeding to lose four straight in the first round. It takes a special kind of pants shitting to have made these Caps look like the killers they always should have been, and based on their relative stasis in the off season, that trend appears to primed to continue.

Goaltending: There is little doubt that Sergei Bobrovsky is the pillar of anything the Jackets hope to accomplish and has been since he came over from the perpetually goaltending challenged Flyers for a 2nd round pick, having won two Vezina Trophies and four all star games while the Flyers still have a handful of themselves in the crease. Bob’s numbers took a slight step back from his 16-17 Vezina campaign, dropping 10 points overall from .931 to ONLY .921, while still being unimpeachable at evens with a .935 from a .938 the year prior. The big drop was in his shorthanded save percentage, dropping 60 points from .892 to a far more pedestrian .831, by far his lowest in Columbus. But all things being equal, there’s no reason to expect much deviation from Bob this year provided he stays healthy, which he has the past two years, playing 128 of 164 total games. In an ideal world, a true #1 goalie should play somewhere in the neighborhood of 55 games a year to avoid overworking, as Bobrovsky’s numbers in April have a precipitous dropoff. In the series against the Caps he sported only a .900 even over those 6 games, which is actually well ABOVE his post season average of .891, and that simply will not cut it, particularly behind a team that isn’t particularly dynamic offensively or behind the bench. Joonas Korpisalo is slated to back up Bobrovsky once again, and his .897 in 17 starts last year is certainly less than inspiring. If he can’t provide even replacement-backup-level netminding, Bobrovsky’s workload will stay at what it’s been and the Jackets will once again meet a similar fate unless some outside help is brought in.

Defense: Seth Jones is an absolute monster, and the time his nigh for his ascension into the Norris conversation annually. Jones will ONLY be 24 at the beginning of next month, and last season put up 16 goals, 41 assists, and a 54.1% possession share all while facing the toughest competition and zone starts available to him. He had 7 goals and 17 assists on the Jackets’ power play, which had greatly declined from the year previous. There is nothing he cannot do from the back end, plain and simple. Likewise, while not as defensively stout, Zach Werenski is a play-driving machine from the Jackets’ blue line, and though his scoring numbers were down from his fantastic rookie season, that was more of a function of power play production, where his assist totals dropped, and that can end up being circumstatial. Werenski put more shots on net and shot a higher percentage than he did from his rookie year, an exceptional 7.7% from the point. The problem is that these two spent 90% of their time together (only 142 of Jones’ 1387 even strength minutes were away from Werenski), and the only times they were split up were seemingly late game defensive zone draws where Werenski couldn’t be trusted to protect a lead. Behind these two is a complete bum squad, with David Savard running out of position, Ryan Murray never making good on his first round pedigree, and some things named Dean Kukan and Markus Nutivaara managing to take up $3.4 mildo of cap space. If Torts were somehow able to split up Werenski and Jones and not a) lose Jones’ offense covering for a dipshit partner, or b) have anyone else capable of playing free safety for Werenski to not give up as much as he produces, they’d have a solid grouping here. But as things currently sit it’s extremely top heavy and can be exploited by any coach with two functioning synapses and last change.

Forwards: Artemi Panarin‘s first season in Columbus went better than this outlet certainly expected, with him going a point per game (27G, 55A) despite not having a top end playmaker to get him the puck. But Panarin plays some of the most sheltered minutes in the league, almost exclusively starting in the offensive zone, and that can handicap a coach without having the center depth to get granular with who takes what faceoffs where. That’s not to say that Alex Wennberg and P-L Dubois are bad players, they aren’t, but they certainly aren’t going to maximize what a bad shot maker like Panarin can do, at least not yet. And Panarin is now in a walk year with his 2 year bridge deal at $6 million per coming to term, and the fact that he doesn’t have an extension yet doesn’t speak highly of his chances of remaining in Columbus. Panarin will likely command around $10 million a year, and with Jarmo wrapping up $11.3 mildo in Nick Foligno and Brandon Dubinsky for the next three years, it doesn’t speak highly to sound asset management. Cam Atkinson is a consistent 25-30 goal scorer in his own right, and he’s locked in at $5.875 per year, but he’ll also be 35 when his paper is up. This is a grouping still not sure of what it wants to be despite having some fairly useful parts.

Outlook:  Because John Tortorella is a goddamn cave man with regard to his coaching philosophy and techniques in 2018, it will always handicap his team slightly, but in his defense he’s working with a roster that doesn’t have a consistent thesis statement defining its construction. This team has top end talent in a few spots, but it’s not necessarily complimentary to the other constituent parts of the roster. As a result, a wild card bid and a first round out is once again about what to expect out of this team, and if they flounder out of the gate or Bobrovsky gets hurt early, the trade market for Panarin could heat up in a hurry and offer them a chance to re-think this grouping, though Jarmo as a GM hasn’t shown much consistency in being able to properly augment his team either. The Jackets are in Hockey Hell and there’s no clear path at the moment to escape it. 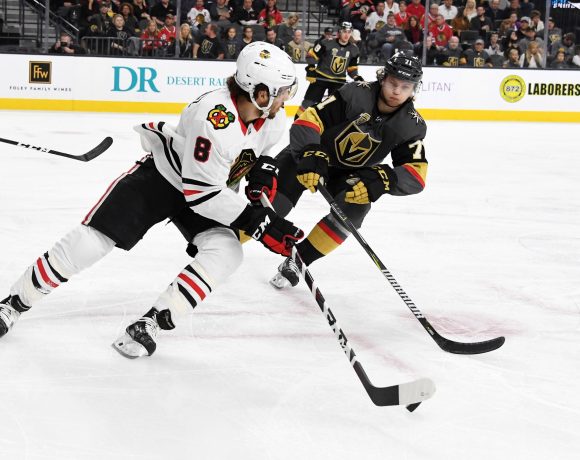 Game #57 – What happens here stays here, except this has happened everywhere – Hawks 2, Knights 5