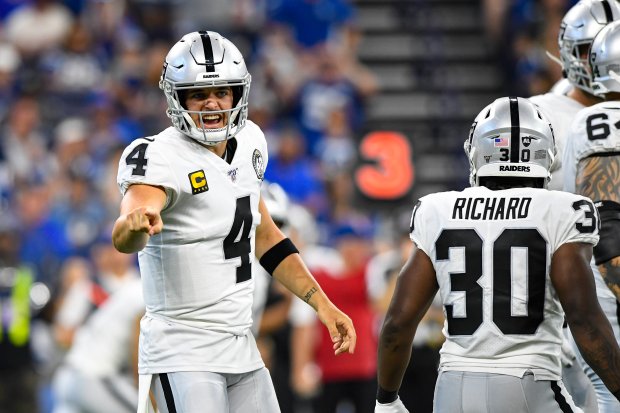 When the Bears face the Raiders this Sunday from Tootenham Hotspur Stadium in London, UK, Derek Carr will be under center for the Raiders. This can be considered a good thing for the Bears as Carr has struggled to recapture the success he had in his Pro Bowl seasons from 2015-2017. Now, much of the decline in productivity can be blamed on the organization he plays for as well as his supporting cast. Which are both a bag of dicks. But throwing for 19 TDs in 16 starts last season is indefensible and general really piss poor.

Through four games this year, Derek Carr has put up numbers that are very much consistent with his career stats:

What really stands out is Carr’s 72.1% Completion Percentage this season, good for 9th best league-wide and higher than some rando’s named: Mahomes, Watson, Phillip Rivers and Ryan.

Last week against the Colts, Carr threw 31 passes. Unbelievably, only four of the 31 attempts went to the right side of the field: 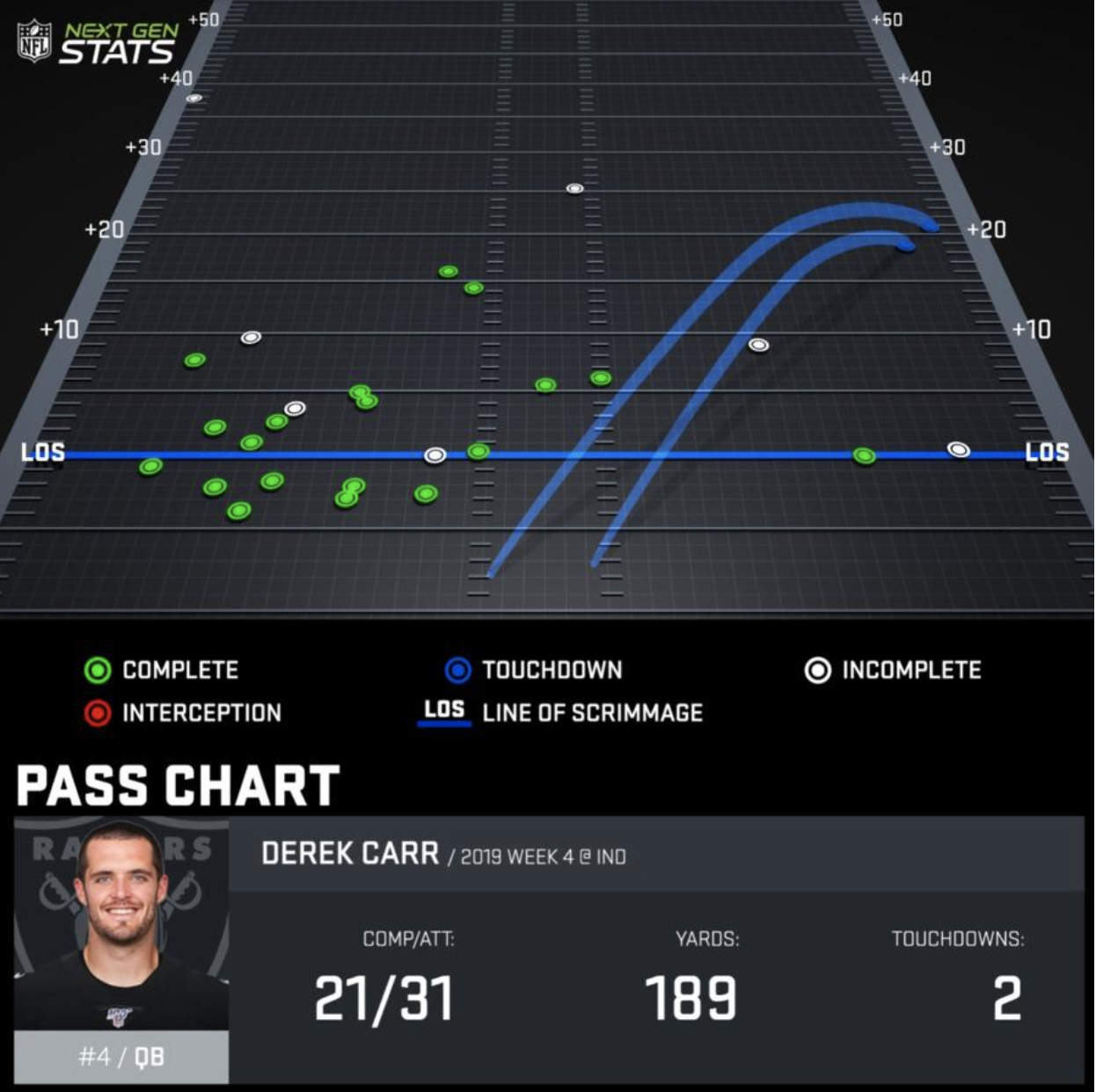 I have never seen a throw chart even come close to looking like this; and to make this whole thing even more confusing, two of four right side attempts went for touchdowns. What in the fuck were Derek Carr and Jon Gruden doing last week?

Now let’s take this whole thing another odd step forward and show you that, last season, Carr was decidedly better on throws to the right side of the field: 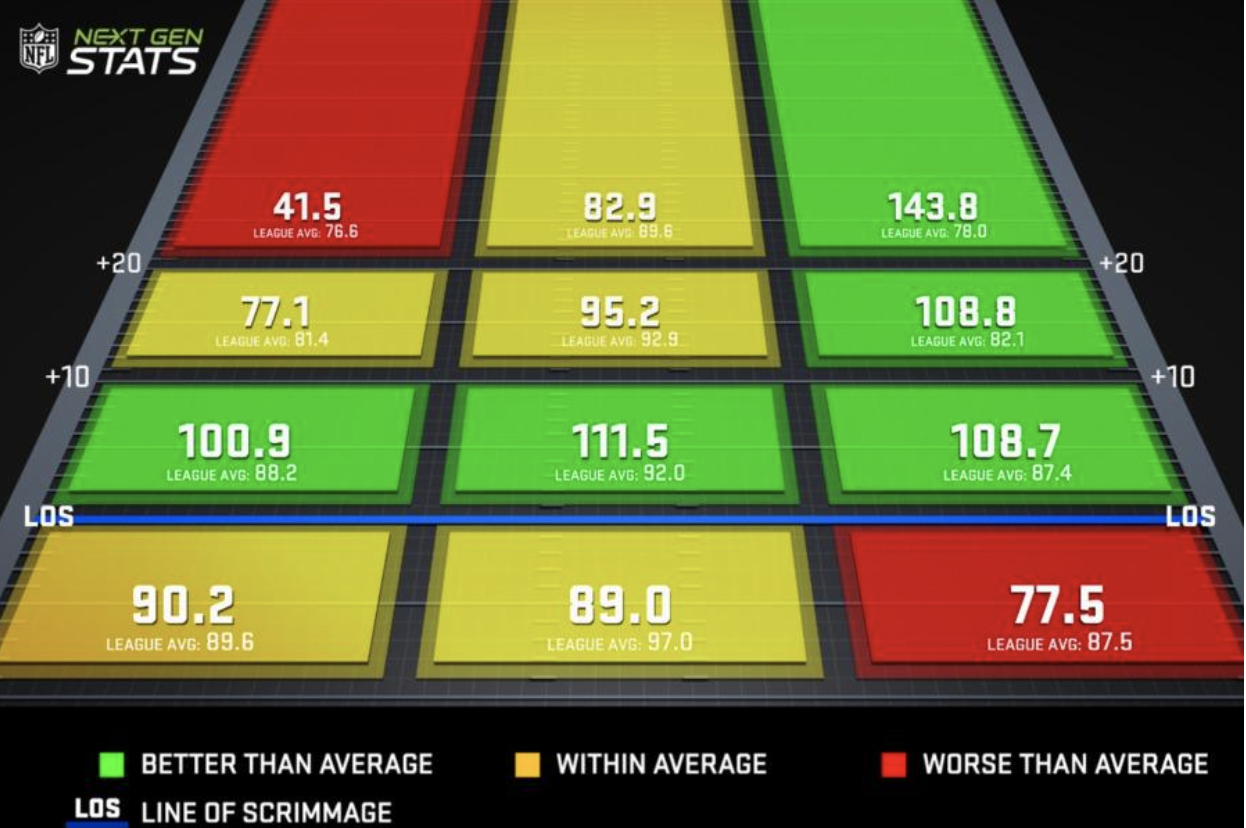 Looking at this chart, Bears safeties should and will be cheating towards the middle of the field and right side all game as Carr is clearly garbage throwing to the left side on anything past 10 yards.

With Amari Cooper Gone, Who Can Catch The Rock?

Derek Carr and the Raiders offense relies heavily on the tight end position in the passing game. Darren Waller has been an absolute beast so far this season, and although he has yet to catch a TD pass, he leads the league in receptions, is 3rd in yards, and 2nd in passes caught for a 1st down. If Carr can get Waller matched up against a Bears linebacker from time to time, he may be able to have a big day in London.

Carr’s other option in the passing game is 5th year veteran Tyrell Williams, who has scored a touchdown in every game this season.  Williams is averaging almost 13 yards per catch with a long of 43 yards. If any of the Raiders pass catchers are going to break a long one, look for it to be Williams.

Don’t expect a lot of catches out of the Raiders backfield. Although Josh Jacobs gets a lion’s share of the carries, he has 3 receptions on the year. Jalen Richard has become more of the 3rd down pass catching threat, and has accumulated 6 catches so far, leading all Raiders running backs.

So What Does All This Mean?

Ultimately, the Bears defense and not Derek Carr is going to be the deciding factor as to whether Carr has a big game. I expect Darren Waller to be heavily involved on quick strike passing game as Jon Gruden will not allow Khalil Mack to become an even bigger story. Game tape from the last four weeks will clearly show that you cannot and will not beat the Bears if your QB is taking 5&7 step drops and trying to sit in the pocket and attack with long balls down the field.