The worst kept secret in hockey right now is that Alex DeBrincat is tearing up the NHL. After getting off to bit of a slow start, with just four points in his first 11 games, he went on a tear in November, with 15 points in his 14 games (including October 28). In that time, he’s had two point streaks of three games and one of four, and notched four points in the Hawks’ Monday-Tuesday back-to-back against Anaheim and Nashville this week, including his first career hat-trick against the Ducks, before scoring another goal Thursday night against the Stars.

When we did the player previews back in September, I wrote in pretty good detail about how much scoring potential Top Cat had. He tore up the OHL year after year, and basically only fell as far as he did in the 2016 draft because hockey can’t get over it’s fascination with size and girth. Despite all of our nerves that the Blackhawks would ignore his strong pre-season and make him start the season in the A, he forced the issue and was able to make the team out of camp. And he hasn’t disappointed at all.

Among the Blackhawks, Whiskers is second on the team in both goals and points, with 10 and 18, respectively. In the league, he’s tied for 36th in goals and tied for 70th in points, which is pretty damn good for a 19-year-old with 24 games under his belt. He has as many or more goals than the likes of Connor McDavid, Sidney Crosby, Patrick Kane, Brandon Saad, and several other stars. Again, that’s good.

What’s really good is the fact that he’s done all this despite the fact that he’s spent most of the year condemned out of the top six by his mustachioed coach for a reason that has yet to been made public. And though I’m not here to re-hash arguments made on here already, as Sam detailed the other day, Q hasn’t explained himself in any way to lend justification to ADB’s tethering to Patrick Sharp’s opposite wing, or Nick Schmaltz playing wing instead of center, which is pretty much definitely keeping ADB on that third line. Lucky for Q, I am here to do it for him.

We don’t really need an explanation from Q, anyhow, because we all know that any explanation we might get would be completely unsatisfactory and/or filled with some random bullshit. We’d probably hear some reference to the idea of him being on the third line if it’s meant to avoid tougher competition, but at this point Top Cat has proven that he’s worthy of, at the very least, an opportunity to face that competition with higher quality teammates, so that argument would fall flat with most Hawks fans. Even with that, though, I still wonder if any sort of lineup promotion is really best for DeBrincat right now.

We’ve been stressing our desire for DeBrincat to play on a wing with Schmaltz and Kane for so long that there’s hardly any of the dead horse left to beat, but his hat trick on Monday gave us an even better look at the fit those three could have. Twice during line changes, he added goals that were assisted by – guess who – Schmaltz or Kane. The three of them have such similar skill sets and playing styles that the fit seems obvious, but with the recent success of the Schmaltz-Anisimov-Kane second line, it’s hard to imagine Q making too many changes to the lineup right now. Schamltz is still probably better off playing the pivot than the wing, but that’s a conversation for another time. The point is, all three of the guys on that second line have been playing well this year, especially in the most recent stretch of games, so you could question if breaking up that line even makes any sense at all right now.

DeBrincat, though, has also shown that he’s good enough to elevate whoever he ends up on a line with at any given time. Look no further than the Hawks’ first goal against Nashville on Tuesday, when he won a puck battle deep in the offensive zone, on a rush, during a line change, and then threaded a pass through all five Predators that was so perfect even Tommy Wingels couldn’t fuck up the tap in. If the Hawks want to roll out three scoring lines – which we know they do – there really isn’t a better fit to be the main threat on that third line right now than Top Cat. Do you trust Richard Panik to produce meaningfully away from Toews and Saad? What about Anisimov without Kane? Do you really want Patrick Sharp to be the focal point of a scoring line at this point? Me either.

So while Top Cat is most definitely not a third line winger by any stretch of the imagination, and having him on another line might provide a better fit for his style, he might actually be best off left alone for now. 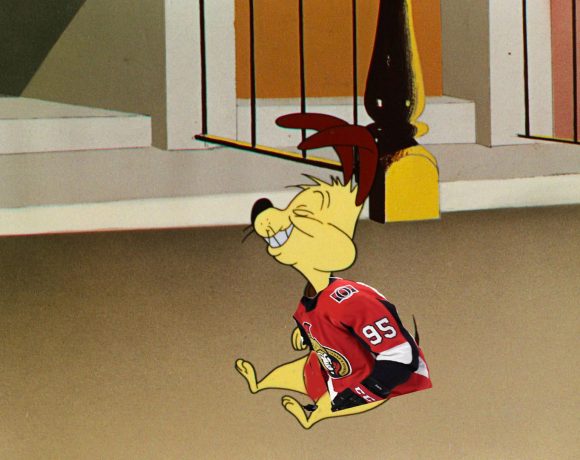 Game #61 – Senators vs. Hawks Spotlight: Matt Duchene, And Knowing What You Are