How Not To Write About The Hawks Elimination

So originally I planned to do some wistful, eulogy-type thing about the Hawks being officially eliminated from the playoffs. And I may yet still tomorrow or Friday. But then I saw this, and I feel like it’s at the root of so much horseshit Hawks thinking right now that I thought it best to dissect it until it’s dust.

Though at the top, I should mention that Steve Rosenbloom has been a big supporter of ours and a genuine fan, so I don’t take pleasure in it (well, not THAT much pleasure). And Rosey is always up for a good argument, so I don’t think he’ll mind too much. With that, let’s go through what Rosenbloom had to say today.

Just like that, on consecutive nights, the United Center was eliminated from the playoffs.

On Monday night, the Bulls lost to the Knicks. Bang, officially out. First goal officially met

Ok… not sure what the Bulls have to do with anything but I’ll allow it. Though the Hawks and Bulls are certainly in different spots in their arc but let’s save our breath for when we need it.

Since winning the Stanley Cup in 2015, their third in six years, the Hawks haven’t won a playoff series. Geez, last year they didn’t even win one playoff game, a pantsing that came one postseason after losing a seven-game series to the evil, dreaded Blues.

Yeah, the thing is they didn’t win a playoff series for two years after the first one, so this isn’t that abnormal? I mean we’ve gone through this before. And when you say seven-game series, you’re basically saying the Hawks lost a coin flip. Which it was. But hey, if you want the Blues recent history instead of the Hawks, that’s your toasted ravioli/mucus to choke on.

Getting swept in a playoff series was deemed unacceptable last year. People lost jobs. Big verbal fingers were wagged. So, what does missing the playoffs altogether for the first time in 10 years bring?

The firing of GM Stan Bowman?

The end of Joel Quenneville as coach?

The argument for firing Bowman starts with Brent Seabrook’s inexplicable contract that still has six years and more than $41 million remaining with a no-movement clause that makes it less a playing contract than a prison sentence.

Look, I will certainly listen to arguments for firing one of or both of Stan and Q. It certainly should be brought up. But…but… I’m no insider, but even I know that Bryan Bickell’s contract and Seabrook’s weren’t all Stan’s idea. That doesn’t mean Stan was willing to see either of them walk, but as we’ve seen with Antti Niemi, Brandon Saad, and a couple others, he will pull the trigger on some parts when he feels they get too expensive.

Second, Seabrook’s extension was signed three months after that third Cup. Yes, it was too long and yes it was for too much money, but what kind of rocks would it have taken to just let him walk? Or trade him? After he had just skated like 30 minutes a game for two straight months? It appears that’s an organizational policy to not do that, and I don’t think that’s Stan’s policy. Also, name me another GM who just let a top pairing or top line player simply walk out the door? You could argue Marc-Andre Fleury, but the Penguins had Matt Murray already taking over. Again, this Seabrook contract is bad, but the alternatives, especially at the time, weren’t nearly as clear as everyone wants to believe they are now.

The argument also extends to the no-movement clauses given to former heroes such as Jonathan Toews and Duncan Keith. Toews isn’t the No. 1 center on a Cup winner anymore the way Keith isn’t a No. 1 defenseman on a future champion.

I know this is convenient and all, but Toews is closing in on a 60-point season which isn’t what you might remember him doing but he’s hardly a bum. And he’s been seriously unlucky to be at that total. Trading Toews to leave the Hawks with Nick Schmaltz and a handful of themselves at center is in a word, “lunacy.”

Keith is Thirty-Fucking-Four. You got a two-time Norris winner for barely $5 million a year. He’s been one of the biggest bargains in the league for a decade. Suddenly he’s just ballast? Yeah ok maybe he’s not top pairing anymore, but you’d still be moving him for 70 cents on the dollar at best. He can probably still take second-pairing minutes. And also we have no idea if that NMC is that big of a hinderance because the Hawks haven’t been motivated to ask because… well Duncan Keith wasn’t bad until this season, and “bad” is kind of strong.

And then there are such things as curiously big contracts for defensemen Jan Rutta and Erik Gustafsson while remaining a franchise strapped by the salary cap.

Except they’re not really strapped by the cap anymore, especially with it going up. Yeah these deals are high, but only by 500k or so and as we’ve previously discussed, the Hawks might have $12 million or more to play with. And no one needing an extension just yet, after the trading of Ryan Hartman. Which Rosenbloom strangely doesn’t mention.

The argument for firing Quenneville starts with that awful team defense and the painfully regular inability to protect a lead. Some of that blame is mitigated by the loss of star goalie Corey Crawford, but defensive responsibility team-wide has been hard to find.

Ok, before I get to the half-dismissal of Crow being hurt as the biggest reason the Hawks blow chunks, you just said four of the Hawks d-men suck deep pond scum (and you’ll allude to a fifth later), and now you’re blaming the coach that they can’t play defense?

Ok, to Crow. Since he got hurt, the Hawks SV% at ES is .910, second-worst in the league. Crow’s was .935. Yeah, ok, maybe unsustainable, but with that SV% the Hawks would have given up 23 goals less just at even-strength. I don’t know how many points that results in, but it’s more than a little. Even a .920 at evens would have seen the Hawks give up 11 less goals, and I’d be willing to be Crow would have eclipsed that because he’s been over .930 for five of the past six seasons . And we’re not even getting to the PK which has suck into the dirt to the points of being past the Earth’s core. “Some” of the blame?!

The Hawks have allowed 228 goals, fourth-worst in the Western Conference. Blame Bowman for not having a backup goalie who can win. Blame Quenneville for not devising a system that protects clearly inferior goalies. And blame the players for not executing and for not scoring the way the Hawks must.

In goals for per 60 minutes, according to NaturalStatTrick.com, the Hawks rank 18th. They used to be the scariest team in the league. Now they’re in the lottery.

Yeah I don’t know what system protects goalies that aren’t even cracking .905. Jacques Fucking Lemaire would have a hard time with this lot. We’ve already been over the blue line. So your point about Bowman is correct, except he’s also the guy who found Niemi, Emery, Raanta, and Darling as backups, so he’s allowed a fuck-up here and there? You just said they were cap strapped so they needed a backup on the cheap.

Ok, the Hawks don’t score a lot. They also have the sixth-worst shooting percentage. They also create the most scoring chances per 60 minutes. Know where I got that? NaturalStatTrick.com. Finish is a skill, yes, but it’s impossible to ignore luck here.

If you’re ranking causes of death this season, Crawford’s injury is No. 1. Then comes the loss of Marian Hossa to a skin affliction. No. 3 is trading defenseman Niklas Hjalmarsson. Then the loss of Brandon Saad – or at least the loss of his ability to play hockey, which came at the cost of Artemi Panarin, with whom Patrick Kane won a scoring title.

Ok, Panarin’s gone. But Debrincat has 25 goals and he didn’t get any of the PP looks that Panarin did. Essentially, Panarin’s goals have been replaced. So your problem there is with Q, no? For making him a third liner for a good portion of the season and having a power play that is causing tooth decay throughout the land?

Crawford’s injury is not on Quenneville or Bowman. Ditto, Hossa. Hjalmarsson is Bowman’s fault, same as the Saad trade, although Saad gets a ton of blame, too, as do the core players with no-movement clauses.

Is this where I have to point out that Saad is basically the same player he’s been in terms of possession, attempts, and chances, and just none of them or going in? Or do I do that later? Or are you blaming him for not being a 35-goal guy which he has yet to be in the NHL? Tell me where that goes, I’m not sure.

You can blame Quenneville for the lousy power play, but look at the talent out there. I’d blame the big names, too.

Where’s the line for “You made Jordan Oesterle a PP QB or a quarter of the season?”

One knock on Quenneville is that he hates young players, something that goes back to Nick Leddy. But if he hated kids, how has Gustafsson gotten another chance after making the awful, series-deciding mistake in Game 7 against the Blues in 2016?

And look at Alex DeBrincat and Nick Schmaltz, youngsters showing they could play in the top six for years. Heck, DeBrincat looks like he’s threatening to become Kane 2.0.

Top Cat has spent most of the season being a third line RW when he’s a top six LW, so his scoring has been somewhat miraculous. It took 30 games to get Schmaltz into the middle over Artem “I Skate Like Something Died In My Pants” Anisimov. So while Q isn’t the dungeon master of young talent he’s portrayed by some, he’s also not the child-whisperer either. And Q didn’t want DeBrincat on the roster at all to start the year, by the by.

And Bowman gets credit for the drafting and development of that talent. This is how the game works. It’s tangled, the blame and the credit. And then there’s this question:

Quenneville trails only Scotty Bowman in all-time regular-season wins. Since the start of the 1997 playoffs, Quenneville is tied with Bowman with three Cups. Nobody has won more.

This always annoys me. With the shootout and overtime rules coaching wins are horribly inflated. Q would still be top ten but like, c’mon. What if Al Arbour never had ties?

Quenneville won those Cups with Stan Bowman, although both received help from Dale Tallon.

Who received help from Mike Smith, believe it or not.

So, you can fire Bowman or Quenneville, or both, and you could convince yourself you have legitimate reasons.

But I wouldn’t. I wouldn’t fire either of them. Their resumes earn one more chance to return to Cup contention. I think the case to fire Bowman is stronger, but I’d give both a do-over.

Weren’t you just complaining that Seabrook and Keith and Toews got extensions because of resumes and not for what they would do in the future? On the nights the Hawks clearly don’t give a shit, I’m not sure they’re all that concerned with Q’s resume. Also, you just said Stan owes a portion of his resume to Tallon, and then torched the part that doesn’t for nearly 700 words.

Because here’s the hard truth: If Crawford doesn’t come back as Crawford next season, then this team is going nowhere and John McDonough might as well serve as President/GM/coach to save the organ-I-zation some cash. 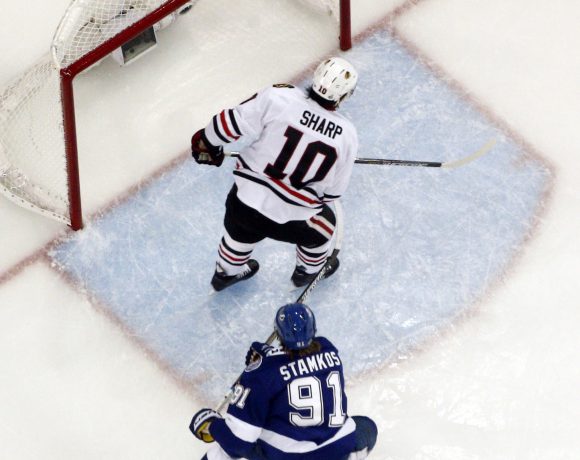