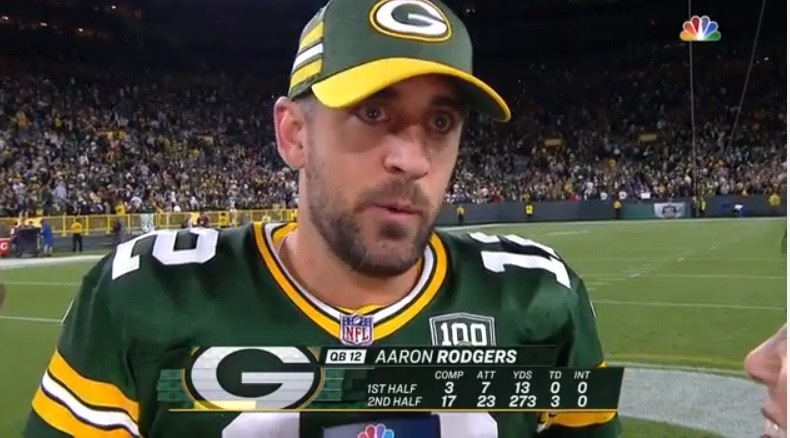 1991 is the last year the Green Bay Packers had to worry about who might start at Quarterback.

1991 is the last time Chicago fans had anything on Green Bay. It’s been misery since.

Aaron Rodgers (against what have to be wildly absurd odds considering what you see when you scan this hellscape for capable, reliable, nearly indestructible, nevermind no-doubt HOF QBs) extended this misery that started almost three decades ago. Green Bay lucked into Brett Favre and nearly 15 years of his wizardry/bullshit and then hit the jackpot again when Rodgers slid into their lap and became the best QB of this generation. Fight me, all of Boston.

Rodgers, now 35 (!!), isn’t really showing his age. 2019 marks his 15th season and 12th straight as leader of the Pack. He’s coming off a subpar season in record only, as you’d assume throwing for 4,442 yards (2nd best of his career), 25 TDs and only TWO INTs (career low) would get you better than 6-9-1, but that gives a better idea of his surrounding cast of late. The season was basically Rodgers vs. his former Head Coach Mike McCarthy, or the guy that kept trying to get Rodgers killed the last 2-3 years. Rodgers entered 2018 coming off his shortest and worst season in his career, an injury shortened campaign that saw him start only seven games, a product of his garbage offensive line and McCarthy’s aforementioned affinity for putting his meal ticket in the worst situations possible at all times.

Enter Matt LaFleur, Green Bay’s dive into the pool of Sean McVay disciples/clones. LaFleur could barely be described as Rodger’s senior at just 39 himself, and honestly I don’t think most NFL fans know anything about him outside of he’s now the HC of the Packers. This feels a bit like an odd sort of experiment for Green Bay. LaFleur has nothing in the way of a resume, at least not one you’d think would get him the top job for a team trying to get what they can out of the last few years of Aaron Rodgers. This could be the team giving in a bit to their mega star, and trying to catch HC lightning in a bottle at the same time. LaFleur learns from Rodgers on the job and plays 1b to his QB1. This would actually be a pretty interesting and possibly successful situation….but this is the NFL. This is Green Bay thinking they’re getting the next young genius, but will he be smart enough to stay out of his own way?

Rodgers sure hopes so, and the blueprint is really laid out for him. McCarthy’s play calling, while clearly pissing off the most important man in the building, had become stale and easy to solve. Rodgers gets a lot of credit/flack for throwing the ball away so often, but that was mostly a product of the bad play calls. He’s smart enough to know when not to take a chance on a small window or when they play is just busted and he can extend his career with an incompletion. Sure, the meatheads wearing cheese might take issue with this, but doing this his entire career has helped him remain the best for so long.

Rodgers is more than just a guy living for the next play, though, and his ability to get his is something a defense can hope to contain more than stop completely. The Bears at least pose a strong threat to Rodgers and the Packers, being able to rush the quarterback effectively. McCarthy’s ineffective play-action won’t be a factor, though, and we’ll see if/how laFleur’s differ. Aaron Jones should contribute to the latter, with establishing a rushing attack now quite important to aiding Rodgers. Chuck Pagano and his league-best secondary will play a huge role as well, and they’ve got a high bar to clear after Vic Fangio’s work the last few years.

Everyone is well aware of the heartbreak from last season’s opening loss to Rodgers in Green Bay, and Rodger’s 4th quarter comeback is the type of thing he’s always capable of – three TDs in one quarter, two over 35 yards, one of which went for 75. The good news? In seven other quarters the Bears held Rodgers under 400 yards passing, picked him off once and sacked him seven times. Essentially, don’t take your foot off the gas against him on defense. Keep the pressure up and be relentless with it while trusting your coverage to make the plays that rush creates.

Khalil Mack said his favorite part about Packers week is sacking Aaron Rodgers. Chicago will need him and the rest of the defense to start the year the way everyone wants to – atop the NFC North and help Rodgers out of his gatekeeper role for this division.