Drake Caggiula is a nice player to have in general. He’s a good combination of decent skill, board-crashing puck retrieval, and missing teeth that each and every rockhead broadcaster pollutes his britches over year in and year out. What makes Caggiula even better is that StanBo got him for Brandon Motherfucking Manning. Sane people may argue that the Strome trade was tops on the year, but we all know that this was truly the feather in StanBo’s stupid fucking cap.

This one’s easy. Drake Caggiula isn’t Brandon Manning. In case you’ve forgotten, Brandon Manning managed to get sent down to the AHL while playing defense on the Edmonton Oilers. There is no better metaphor that can accurately capture how fucking bad he is at his chosen profession. What an asshole.

On top of not being Brandon Manning—the PETA of hockey players—Caggiula looked serviceable if not good in his 26 games here. He spent most of his time on the first line with Daydream Nation and wasn’t a total clusterfuck up there. Granted, if your first line consists of Drake Caggiula, either your coach is an idiot or you suck, but since we know that the latter is certain and the former is a distinct possibility, you live with it. On the first line, he came close to scratching even in possession, and was above board in the relative Corsi share (+1.8). He was the guy doing what everyone wishes John Hayden would do, which is retrieve pucks and set up his more skilled linemates.

Caggiula is a bonafide bonehead. Two games after spending a month in the dark room with a concussion, ya boy went out and got his skull caved in by Dustin Byfuglien, a man with hardly enough motivation to elbow his way to the front of the buffet anymore. It’s hard to have a consistently positive impact for your hockey team if you’re too concussed to play.

By virtue of being on the first line, Caggiula had plush starts, starting nearly 60% of his time in the offensive zone. This makes those possession and expected goals percentages look pretty shitty. But that’s also a function of playing with Garbage Dick, who tends to make a lot out of very little.

Caggiula is still pretty young (24) and is on a decently cheap contract for next year ($1.5 million cap hit). Having him available to play top line minutes is a plus, but it shouldn’t be what we expect from him going forward. He looks like a much better fit as a puck retriever in the bottom six, but I’m not sure I’d trust him with the kind of defensive responsibilities you’d give to the Kampf line.

If the Hawks are going to stick with Saad on the third line, that could be a safe spot for Caggiula, especially if we’re looking at Caggiula as a center, which seems to be where StanBo and Beto O’Colliton want to slot him. Something like Saad–Caggiula–Sikura/Kahun could make for some decent depth scoring and responsible possession. With no history of defensive responsibility, you’re sort of forced to put him in a role where he can take advantage of softer zone starts. But he’s shown he can handle that in a small sample size last year.

Overall, Caggiula is a fine if not good puck retriever with OK speed and a bit more touch than the average grinder. Certainly better to have that than whatever it was the Brain Trust thought they were getting with Manning. 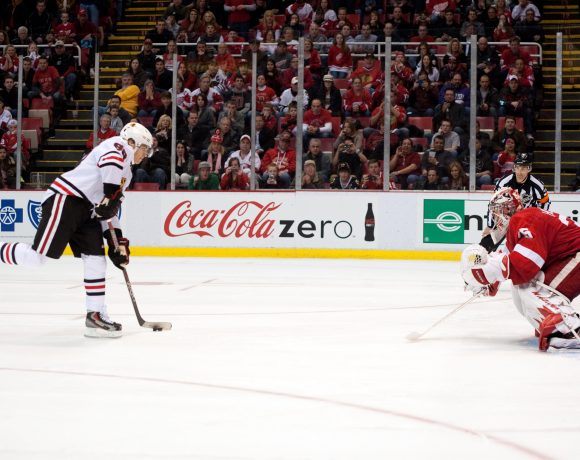